Paper, pencil and a bunch of bars

An entry for the Fortnightly Topic Challenge #40.

Alice and Bob are two rational players who are playing a simple pencil-and-paper game.

In the beginning, there are fifteen small vertical bars on the paper in the form of a pyramid. Players take turns crossing over one or more bars, and the player who crosses out the last bar wins. 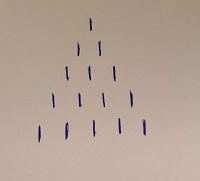 A turn consists of making a single horizontal stroke which crosses over at least one uncrossed bar. More than one bar can be crossed with one stroke, up to and including the whole row if the player so chooses. Bars that are already crossed can be crossed over again, so long as the stroke still crosses over at least one previously uncrossed bar. The game ends when all bars have been crossed, and the player who made the last move is the winner.

In the current game, Bob has just finished making his move. 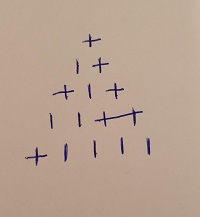 What was Bob's last move?

Nim with five piles. (It wouldn't be if moves weren't permitted to cross over already-crossed bars.)

So in this case

an even number of moves have been played (because otherwise the winning player has shifted) and so 4->2 happened in a single move (which must have been made by the second=losing player, as will be apparent if you think about the binary expansions of the row-counts).

Bob's last move was to strike out two bars on the fourth line.