Alice and Bob are playing a game of reverse dots and boxes.

Both players are well versed in strategy and play to minimize the number of points they get. In the position below, Bob has just finished making his move. 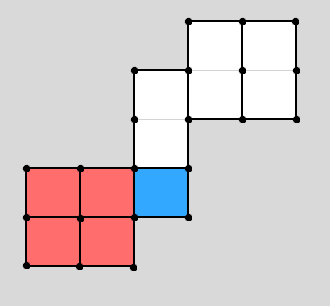 The starting position looked like this. Note that the outer borders are all filled from the start and lines can't be put outside of these outer borders. 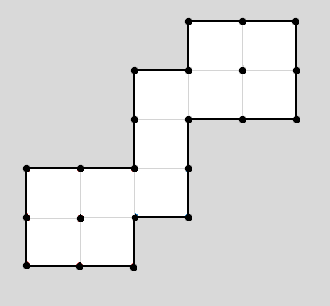 What was Bob's last move? Which colour belongs to which player? Who will win the game?

The winner can be found by analyzing the game regardless of the position.

It is not possible for Alice to win the game.

Now that we know the winner, who is which color?

The given position is compatible with two scenarios:
Alice is red, Alice: F, Bob: E H, Alice A, Bob C, Alice B D K, Bob I.
or
Alice is blue, Alice: A, Bob: B C D E H, Alice F K, Bob I.
There are variants to both scenarios. The outcome is the same.

In the first scenario Alice looses with 10 points, in the second only 7. Since Alice plays optimally, she will have chosen to loose with 7 points, so she must be blue.

Alice is blue, Bob is red. Alice will loose with 7 points.

And Bob's last move would be

Not the answer you're looking for? Browse other questions tagged strategy game game-theory retrograde-analysis dots-and-boxes or ask your own question.

15
Optimal play for 2 by 2 dots and boxes
1
What's a good Boxes Strategy?
6
Placing dominoes on a 3x100 checkerboard
12
Ninety-nine non-negative numbers
1
Strategy in Coloring a 4x4 empty grid and the one who completes any 2x2 area of the grid is the loser
9
Paper, pencil and a bunch of bars
8
No point shuffling, just pick your cards
14
Reverse dots and boxes
8
Reverse dots and boxes, swastika edition
12
Reverse dots and... cubes? - Snowflake edition