Note: Turns out the intended answer to this doesn't work after all (see comments to Sconibulus's answer). The rules have been changed slightly after the fact to ensure there can be valid answers (see extra rule #1). Anyone who's tried to solve this, I apologize for the time wasted. I should have verified this properly before posting.

Racetrack is a paper-and-pencil game where two or more players race around a track drawn on grid paper. The game uses vectors to represent each player's movement. 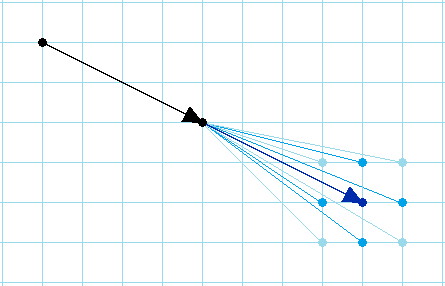 An example of possible moves. The black arrow represents the player's previous turn. The dark blue point is the principal point; it and its eight neighbours are all legal choices for the next move.

Extra rules specific to this puzzle:

1 (This part was added two weeks after the puzzle was posted.)

Example 3. A win for player 2 (red). There are multiple ways to win; two are shown here.

Design a track where, with best play, player 3 wins. 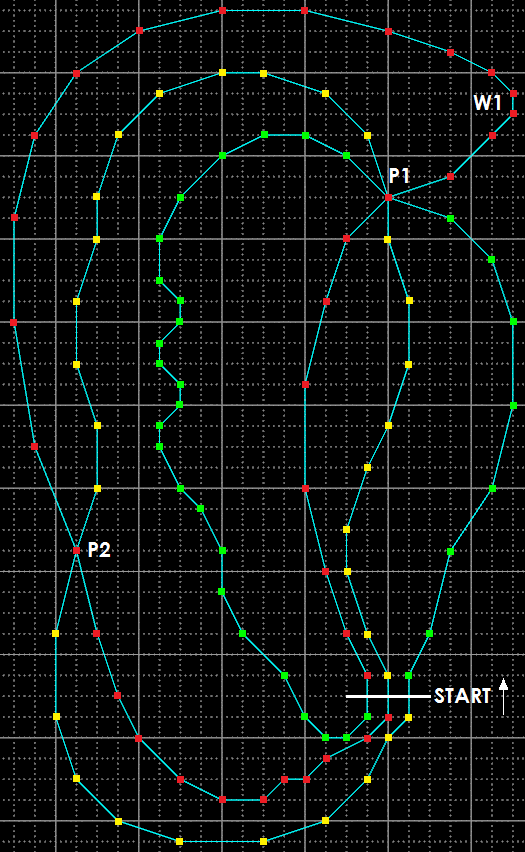 There could be a little mistake in there, but nothing that couldn't be fixed. So to recap:

The paths shown are surrounded by walls such that they are the only possible paths to take.

Typically paths are constructed such that they require certain levels of speed. This means we can prevent players from waiting (usually), and it also prevents players from changing paths at an intersection. The "home-stretch" of each path does not need this constraint because each player will try to finish at fast as possible anyway.

The # of moves each path requires was specifically chosen such that certain players in certain start locations would cause crashes. If player 1 chooses to take the short path, they will crash should either player 2 or 3 be on the medium path. By this logic, player 1 must choose the long path in order to not crash at the first intersection. The same reasoning almost works for player 2 not being able to take the short path but there is a problem.

Player 2's handicap allows them to choose to wait at the starting line. This means player 2 could wait 1 turn and then not crash into player 3 (who would be on the medium path in this scenario). This would result in a tie. This is why the 2nd intersection point was added. The path lengths make it so player 2 would end up crashing into player 1 at the second intersection should player 2 have waited 1 turn. This also means that player 1 would be in danger of crashing into someone else during the intended scenario, which is why the long path allows for a waiting point between the intersections (W1).

Most of the list of possible starting combinations and waiting options are easy to eliminate because a player wouldn't choose to kill themselves. There's a couple tricky ones left after that but there's only one scenario players would choose in the end:

Player 1 takes the longest path, player 2 takes the medium path, and player 3 takes the shortest path. Player 2 will not need to wait, and player 1 will choose to wait 1 turn (in between the intersection points) to not crash. Player 3 wins in 34 turns, player 2 in 35 turns, and finally player 1 in 37 turns.

@Bass had a very similar idea to mine. Funny how that works. I was going to wait and try to actually draw it, but I feel like it isn't worth the effort, now.

All three starting locations can be constrained such that each follows it's own path. Player 2's handicap is useless and because the corridor requires certain levels of "speed" they cannot afford to wait before starting. It would look something like this: 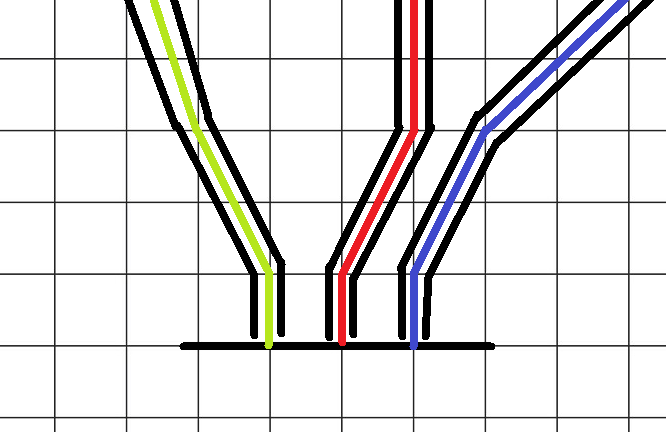 I know, my Paint skills are of legend. Anyway, each path does what it has to and they all meet at a common point eventually. The point is shared, but because of the player speed, the paths remain individual. 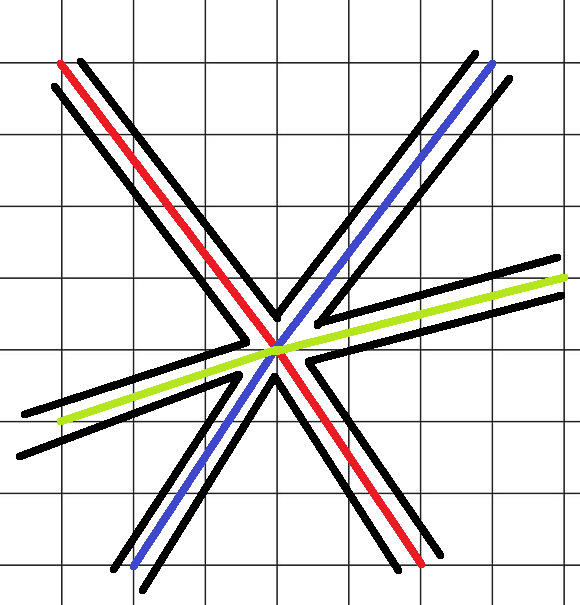 After this each path leads back around to the finish line. Why does this work? We have to construct the paths such that their lengths are different. Green is the longest, red in the middle, and blue the shortest. The caveat is that the distance each path takes to the intersection point is, for example, 10 moves for green, 11 moves for red, and 12 moves for blue. This means the player on the longest overall path gets to the intersection first (by one turn). If player 3 is on this path, both players 1 and 2 will die in a horrible crash because player 3 will be sitting at the intersection when they get there. Player 3, conversely, can take the shortest path without fear of being killed at the intersection. The only outcome then is: Player 1 takes the longest path to not die, player 2 takes the medium path to not die, and player 3 takes the shortest path and wins.

I didn't realize that player 2 could stand on the starting point during his first turn, and that does mean he could survive taking the shortest path if he waited 1 turn, and then would tie with player 3 who would be on the medium path.

To correct that, there would have to be a second intersection point, between the longest path and the shortest path. Player 1 still has to take the longest path to live, so the 2nd intersection can be used to let player 1 block a theoretical player 2 on the shortest path (who waited one turn). This would mean player 2 would have to wait two turns to live, and would then lose to player 3 in that scenario. 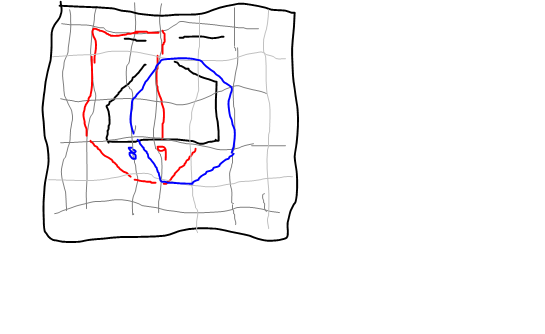 OK, so here's my track design, or at least the functional part of it.

I call it The Candle of Chicken.

Unlike the examples above, I've marked the spots that are not walls, that is, there's only a very narrow path available from the start at the bottom. 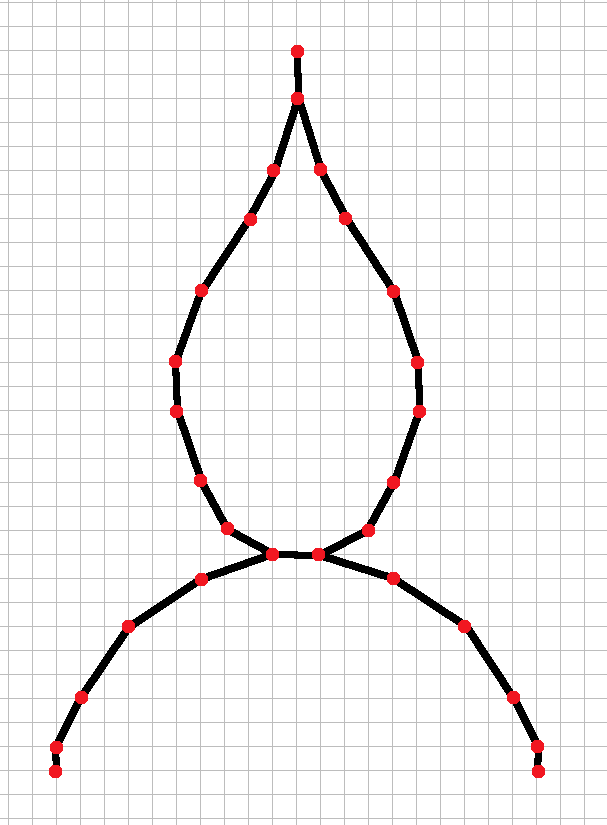 The starting points are symmetrical, and there's only one choice to make: Either stop after the first move, or keep going. The track is designed so that there are zero choices to make after that. In the map above, I've marked the only possible moves with red dots.

The player that goes first is at a disadvantage: the second player will always choose to go, so the first player will unavoidably crash if he also chooses to go. On the other hand, if the first player "flinches" and stops, thus losing the game of chicken, it takes four extra moves to back up to the starting line and re-accelerate before he can make it through the first curve, so he's going to be hopelessly behind.

Now, this design only beats one opponent that started earlier, but that's no problem, we can just chain another one right after it; just make sure that the other path takes the same number of moves to reach the bottom of the second chicken candle.

After the second candle, car 3 is certainly in the lead (possibly even the only car in the running), so we'll probably add some sweet jumps to the remaining part of the lap so that he can celebrate. 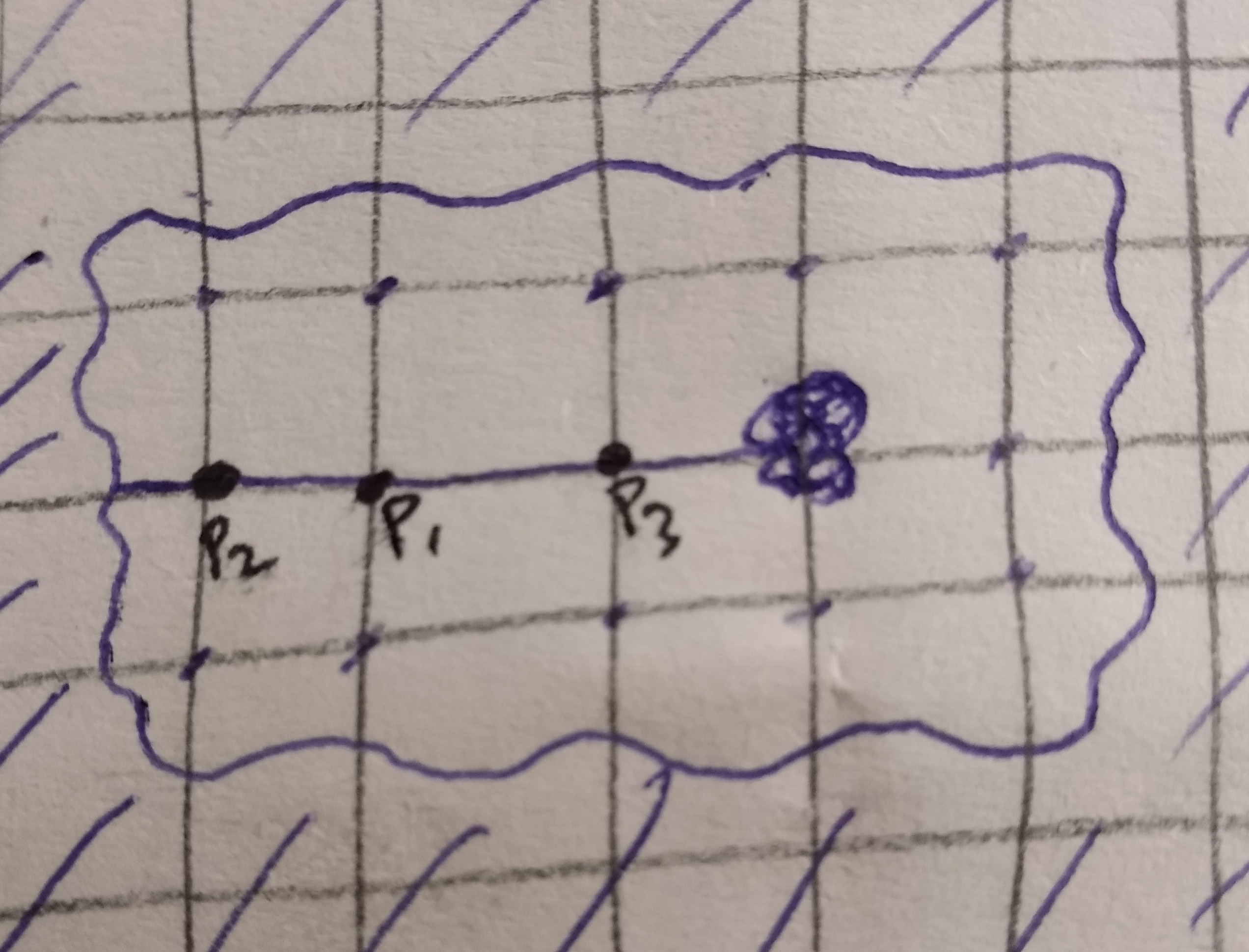 Not the answer you're looking for? Browse other questions tagged game-theory construction or ask your own question.