Minimum cuts to make a rectangle into a square, allowing bending

Mike has a thin sheet of cardboard which is 96 centimeters large by 24 centimeters wide and a guillotine whose maximum cut length is 80 cm. Assuming this guillotine can cut a maximum of two layers of such cardboard. What is the minimum cuts he can make in order to get from that sheet 36 squares whose sides are of 8 centimeters?

The alternatives given are as follows:

I'm not sure how to get the optimal number of cuts. Does a way to find the optimization exist? So far I'm getting more than 6 cuts. My approach is to cut the bigger chunk of the cardboard in two pieces of 48 cm with hopes of getting a 6 by 6 squares, but from then on I got stuck.

Does a general guideline on how to solve this kind of puzzle exist?

This seems to be a modification from the usual problem which does not allow bending of the material to be cut.

This seems to be an adaptation from a reprinted copy of the 1970s edition of Martin Gardner's Puzzle Carnival found in a collection of riddles in Logical challenges.

Initially I thought that an approach would use the least common factor but upon looking at this puzzle it seems that is not the case. Since I'm not good with visualization of cuts, it would help a lot if the answer would include some sort of drawing or sketch on where should those cuts be made.

It can be done in 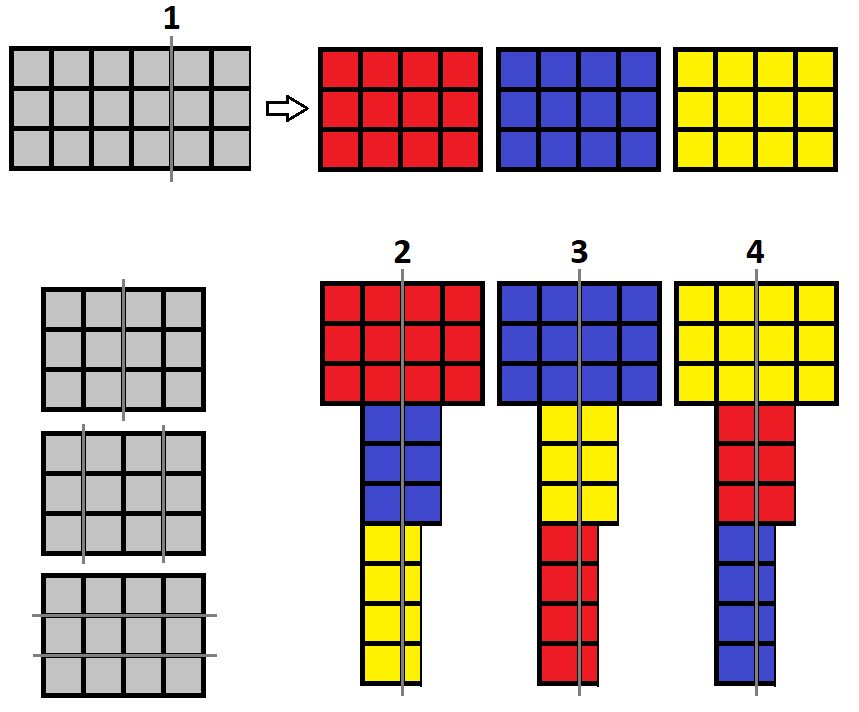 1. Bend along the short side and cut to get three equal 32x24 bits.

Could it be done in fewer?

An optimal step would cut a combined total length of 2x80 or 20 in units of small square side. Altogether we need to cut 2x96 or 24 and 11x24 or 33. i.e. 57 in total. In principle, this would fit into 3 cuts, but since in the very first step we have to waste more than 3 units this cannot be done in practice, so 4 is indeed the best we can do.

Not the answer you're looking for? Browse other questions tagged mathematics geometry optimization dissection or ask your own question.

9
The Erasmus dissection of a square
12
Cut this shape into 3 pieces and fit them together to form a square
1
Does a way to find the least amount of pizza cuts for a certain number of slices (11) exist?
6
How to get the least number of flips to a plastic chips to get a certain figure?
1
How many lines are needed to connect all smiling toasters in a 4x4 grid?
1
Least cuts to get 44 rods from a metal grid
0
Nested six-point stars: least number of cuts to dissemble
1
How many figures to cover the kitchen floor?
0
What is the perimeter of a pentomino which can tile this heart-shaped board?