How many figures to cover the kitchen floor? 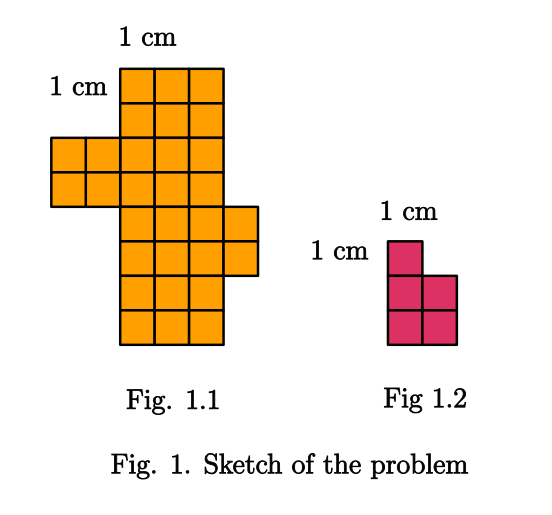 It seems that the intended meaning is that overlapping should be minimized, although this is not specifically stated. It appears there is no way to cover the figure without overlapping the small figure, if overlapping refers to not leaving the contour of the figure. Considering this, does a way to minimize overlapping exist?

This puzzle is somewhat of an adaptation from an APA exam of late 1970s and it appears to be based on Thurstone's and Catell IQ tests of such period.

I'm not sure what would be the right interpretation of "without overlapping or leaving the exterior edges". I think it means not trespassing those. However, no matter how many times I've attempted to rotate the second figure, I cannot seem use only the smaller figures to completely title the larger one. In other words, it is not possible to rebuild the first figure by only using the second figure.

If overlapping the small figure is allowed (I'm not sure) I get 7 pieces, which is off by one from the given choices.

What could be wrong here? Can someone help me?

There is a way, though (if you allow reflections): 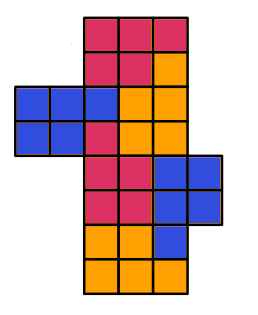 Not the answer you're looking for? Browse other questions tagged mathematics geometry packing or ask your own question.

6
How many possible different shapes are there on a 4x4 dot grid?
12
How many matchsticks need to be removed so there are no equilateral triangles?
1
Minimum cuts to make a rectangle into a square, allowing bending
1
Least cuts to get 44 rods from a metal grid
0
Nested six-point stars: least number of cuts to dissemble
0
What is the perimeter of a pentomino which can tile this heart-shaped board?
0
How many L-shaped pieces will not be used to make cubes?
0
Number of turns a coin makes going around some other coins