Does a way to find the least amount of pizza cuts for a certain number of slices (11) exist?

I found this problem in a Logic and Reason book from 2000's which seems to be reprinted or adapted from Martin Gardner's book of recreational puzzles. In the beginning it seemed rather easy but I couldn't find a way to solve it properly and ended up just guessing.

But does a better way to solve it exist?.

In the road coming back from the lumber store, a carpenter notices that he requires to cut a 5mm thick pine circular plate in equal parts in order to make the support stand of a satellite dish which is to be placed atop his home. Since he's running out of batteries of his only electric saw and assuming that he cannot use his truck's battery due the rain to charge his saw (Hence he's urging to cut the wood). Find the least number of cuts he can make in order to produce the $11$ equal slices of the same thickness (5,mm) he needs assuming that the led indicator in his saw warns him the saw can function properly for 8 cuts before the unit stops.

As I mentioned it seemed easy but I tried different combinations and in the end I couldn't find the right one.

In the end what I attempted was just the obvious but this is not the answer. 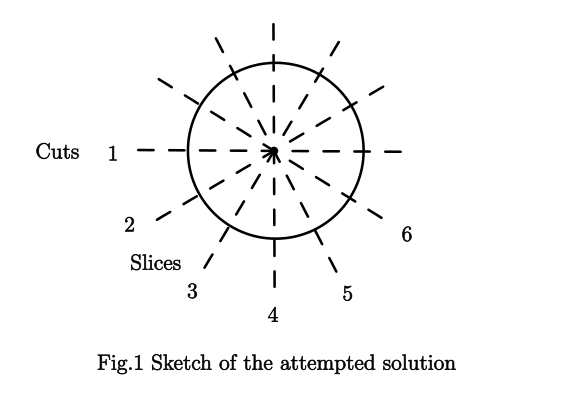 No matter how many times I've attempted I ended up off by one either over the number or below the number listed in the choices.

Is there some sort of logic in puzzle?. Can someone help me with where to look for or what to do first in these kinds of situations?. Since this involves doing cuts in a flat surface it would really help me a lot to include some drawing or diagram to better understand the approach.

Note: Although it doesn't specifically indicates that overlapping the slices is allowed or not allowed (for cutting), how different would the answer be if the overlapping of slices to reduce the number of cuts is not allowed. Can it be solved this way?

Here is one answer which involves stacking to cut through multiple pieces in one cut.

First draw on the circle 11 wedges of equal size; like a pizza cut into 11 slices the same size as you would normally expect. 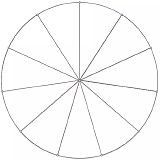 Our first 2 cuts are are used to cut the circle almost in half; one half will have 5/11 pieces, and the other will have 6/11 pieces. The cuts do not line up exactly through the center of the circle, hence we need 2 cuts instead of one. 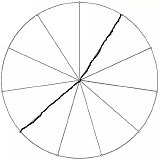 Next, put the smaller piece over top the larger. There should be a single piece of the larger not covered by the smaller. Now cut the larger into 3 sections, each with two pieces. This takes 2 more cuts. 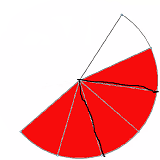 At this point, you have 5 sections which are twice the size of the end piece, and one piece which is exactly the right size (it came from the 5/11 section). Stack all 5 sections and cut them in half with your 5th cut. Now you have 11 pieces which are all the same size and shape.

Not the answer you're looking for? Browse other questions tagged optimization dissection or ask your own question.