This is part two in my clichéd treasure island puzzle series. The story carries directly on from part one.

You take an incredulous look at the map.

spoiler for part one

"That's a bit of a cliché. "Do you think that means Cross-bone Cliffs?"

"Not a chance." replies your Dad. "That place was barren. Nothing there other than rocks and bird crap. I think the map is just messing with you. Leave it."

But you can't leave it, can you? What sort of story would this be if you just ignored it and binned the map? Terrible. Through bribery and alcohol you convince your best mate, Frank, and his sister, Joan, to join you on an expedition to the island, which just so happens to be within sailing distance, and Joan just so happens to own a yacht. Convenient.

You land on the north-east of the island, on the beach by the echo caves. The three of you trudge up to the mouth of the cave and peer into the uninviting blackness. The caves disappear steeply down into the side of a hill, heading inland. You stand at the caves mouth and decide to test the relevance of the name. You holler into the void: "BOOM!" The cave seems to swallow up the shout, but a few seconds later a deep echo returns.

"That's odd. Not exactly what I said, but I suppose close enough."

It seems clear that the cave is twisting your words. But why? Is it trying to tell you something? To determine what it is saying, you shout different words and record the echo.

The clues below hint to what was spoken and what was echoed. Can you figure out the specifics and determine what the cave is trying to say?

I'm having fun with these tables, so if it doesn't show for any reason here is a CSV of the same:

Arranging the answers in columns, with the relevant letters next to them: 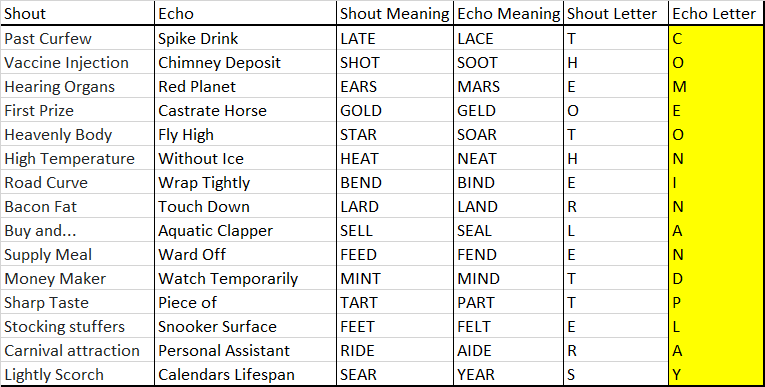 Come on in and play.

Then the answer can be extracted by

looking for the changed letter of the new word, i.e. COME?NIN?N??LRY

Not the answer you're looking for? Browse other questions tagged enigmatic-puzzle story crossword-clues or ask your own question.