My dear friend researches and designs canal irrigation systems in a remote desert. He's been missing for two weeks. Members of his research team have reported erratic changes in his behavior prior to his disappearance, and that he's been adding random letters and numbers on the edges of his maps. Here are scans of all the maps I could find in his office. 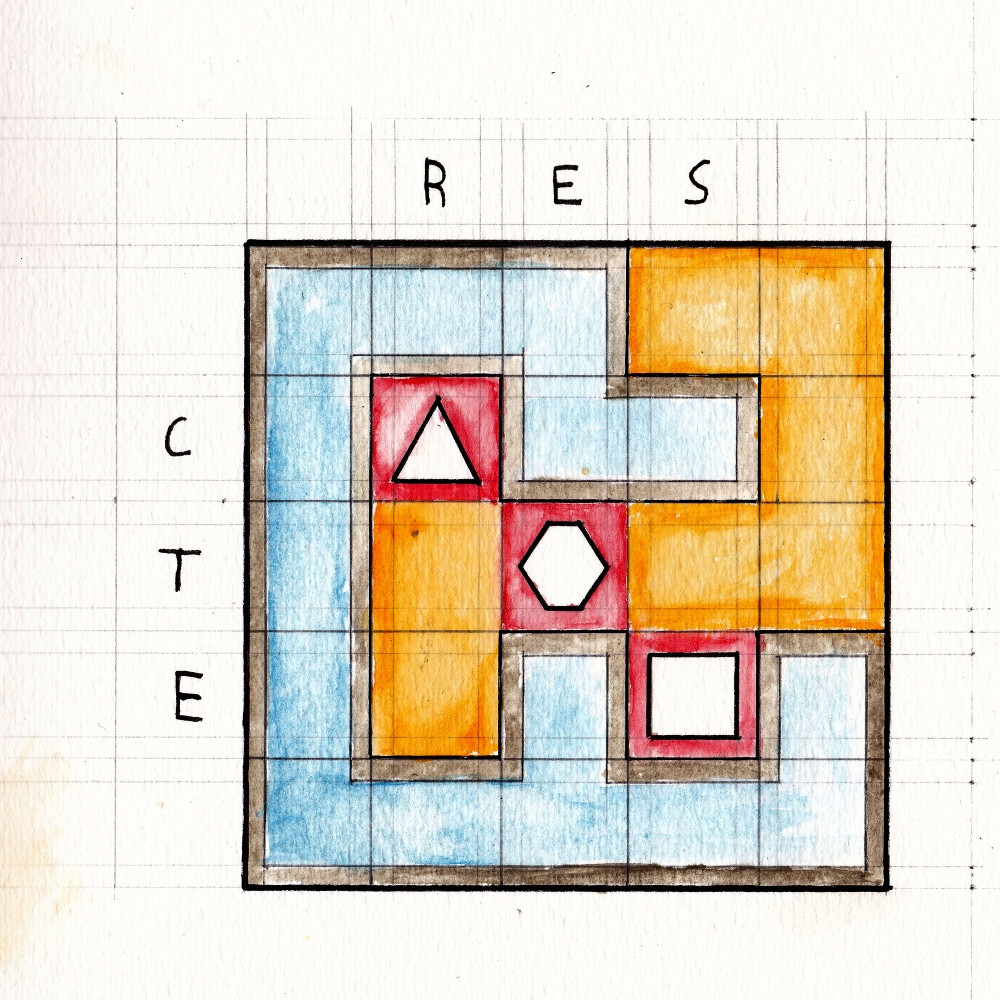 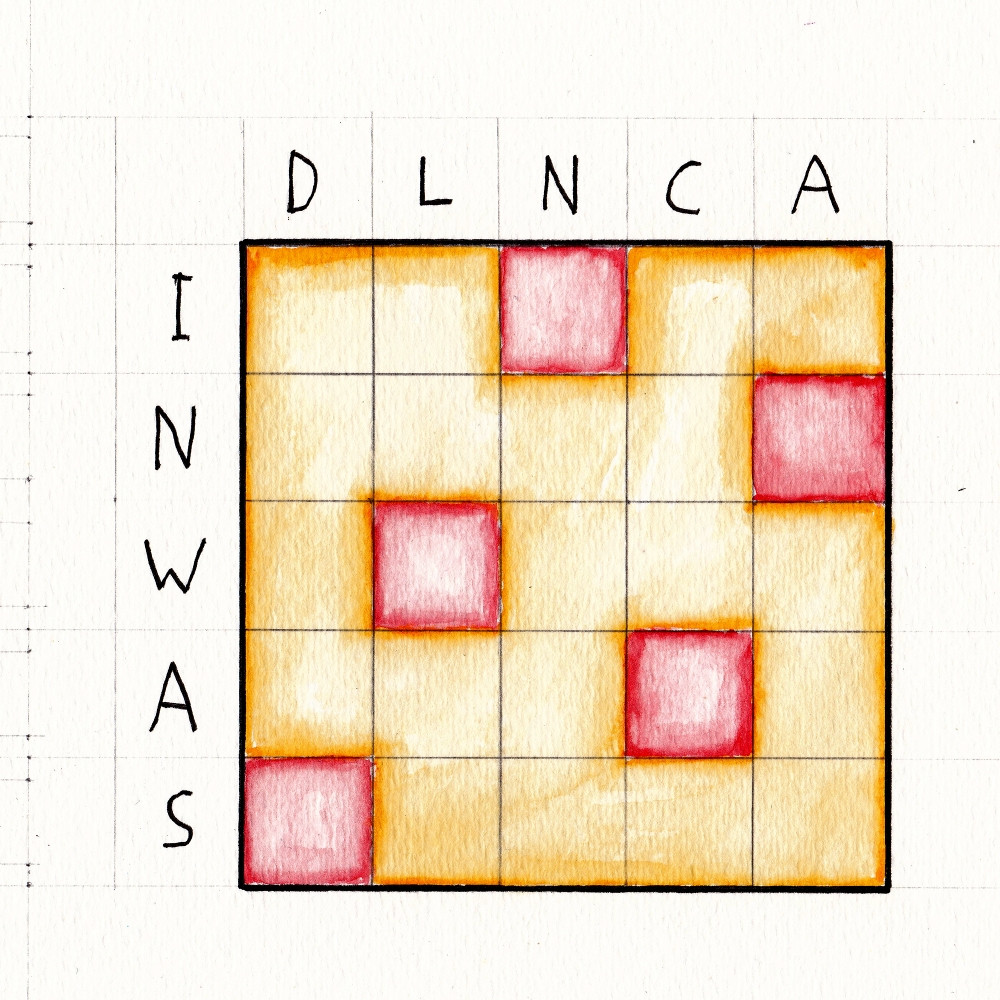 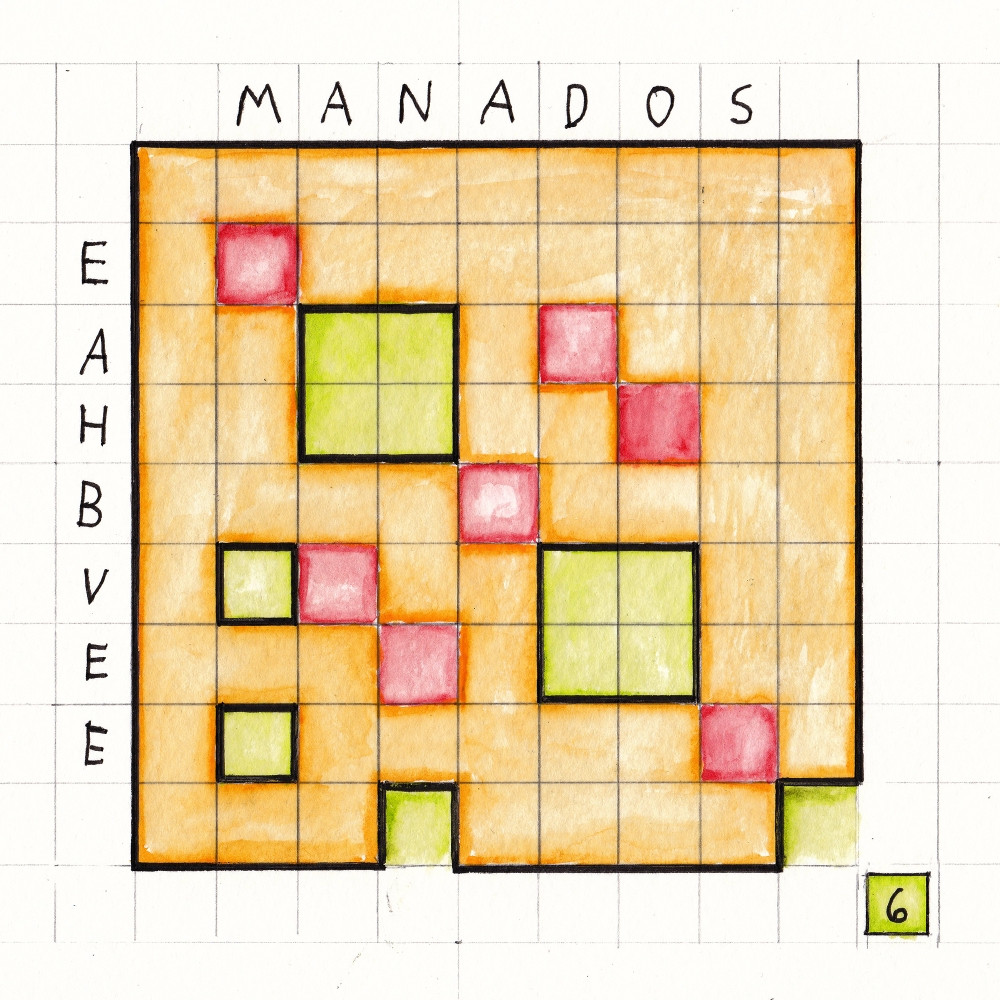 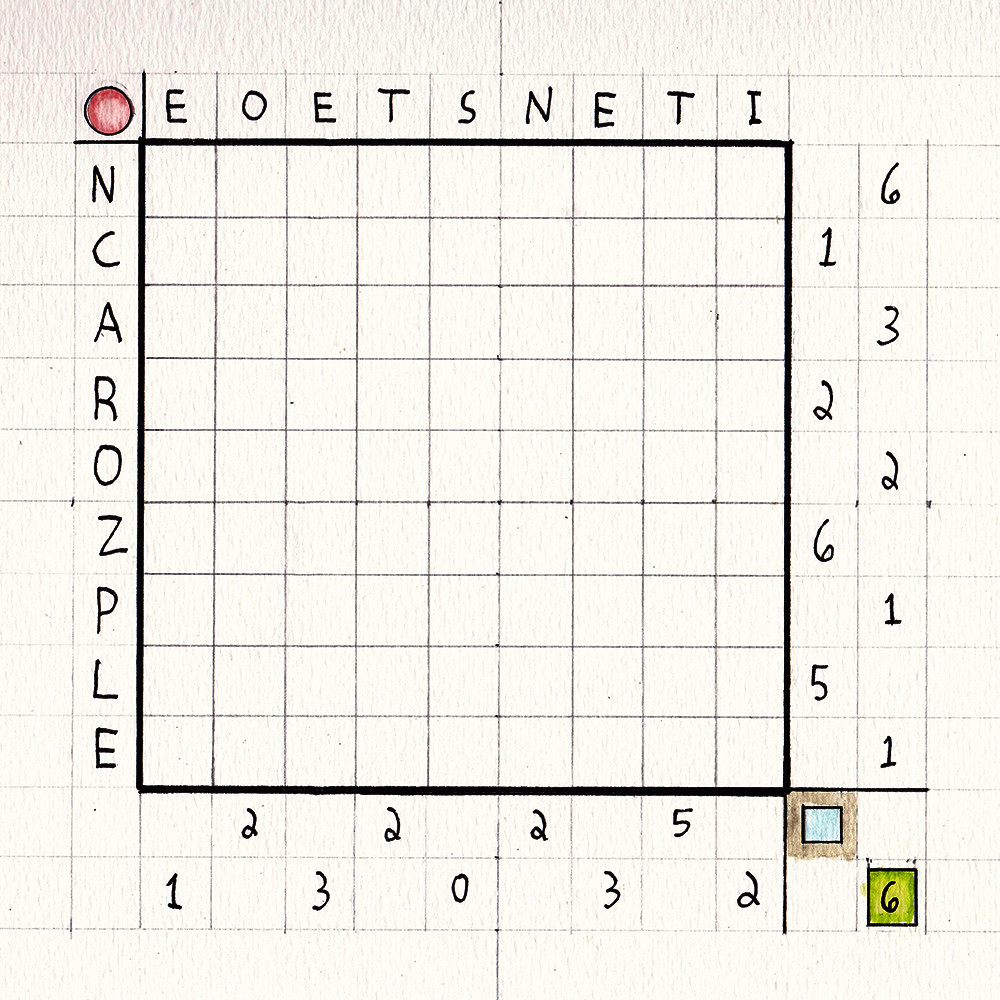 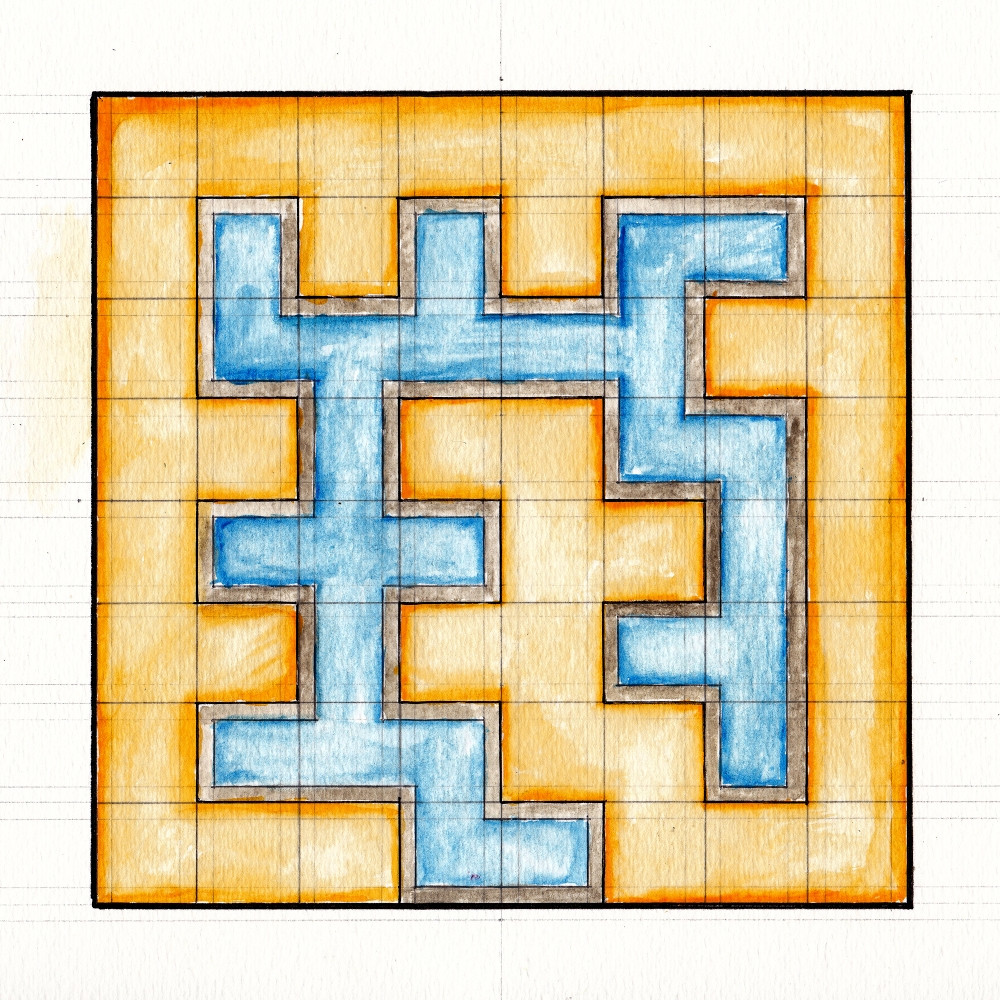 This last one had no text or north arrow, so I'm not sure if it's oriented correctly.

There were some other strange drawings in his office as well. This was pinned on the wall.

This was found in a secret drawer in his desk. 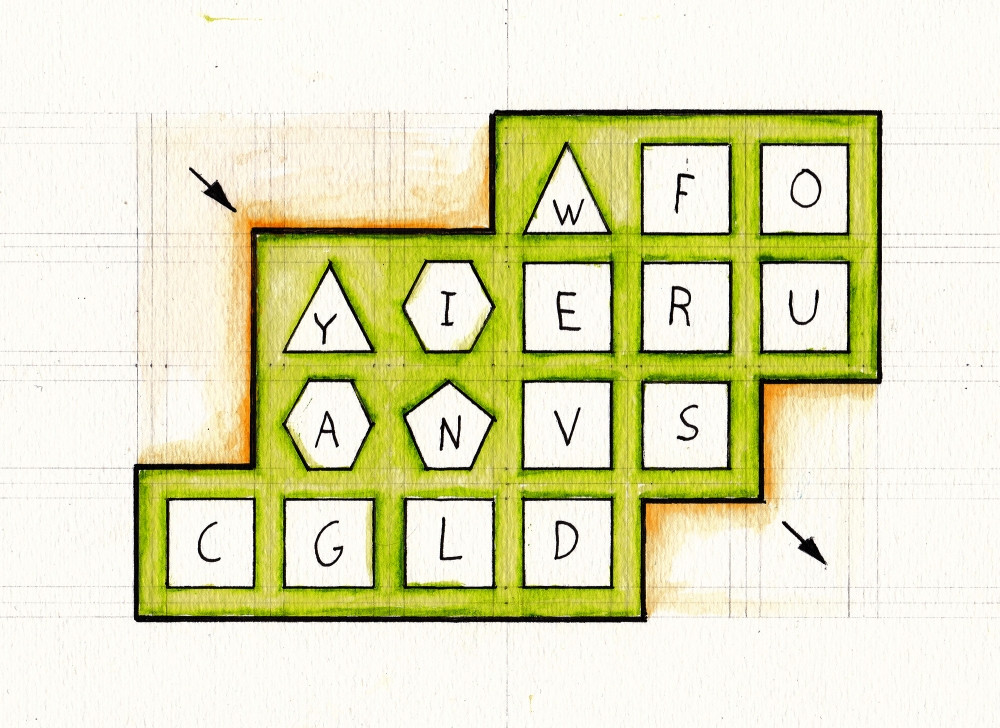 And this was on a piece of vellum on his drafting board. 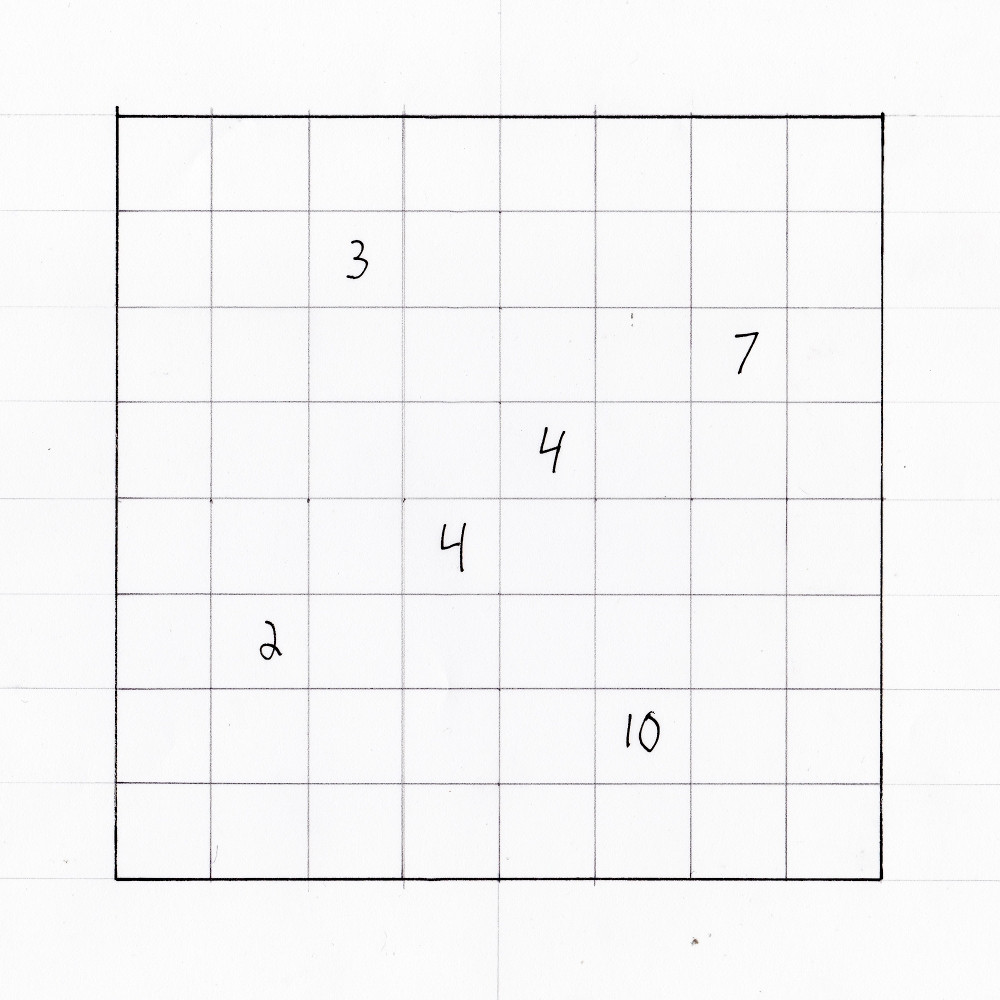 Where could he have gone?

At long last, a hint:

as4s4hetic's observation about the number of sides of the shapes corresponding to the number of Yellow/Red cells is a complete (and quite unlikely) coincidence that unfortunately I didn't catch, forming a red herring I think many are understandably chasing. The shapes have a different meaning. Other than that, as4s4hetic is very much on the right track and excruciatingly close to discovering a critical part of how this hybrid is structured.

I have noticed that in the first image,

The number of edges of the shapes in the red squares correspond to the number of orange (and red) squares within the 3x3 grid surrounding the square. 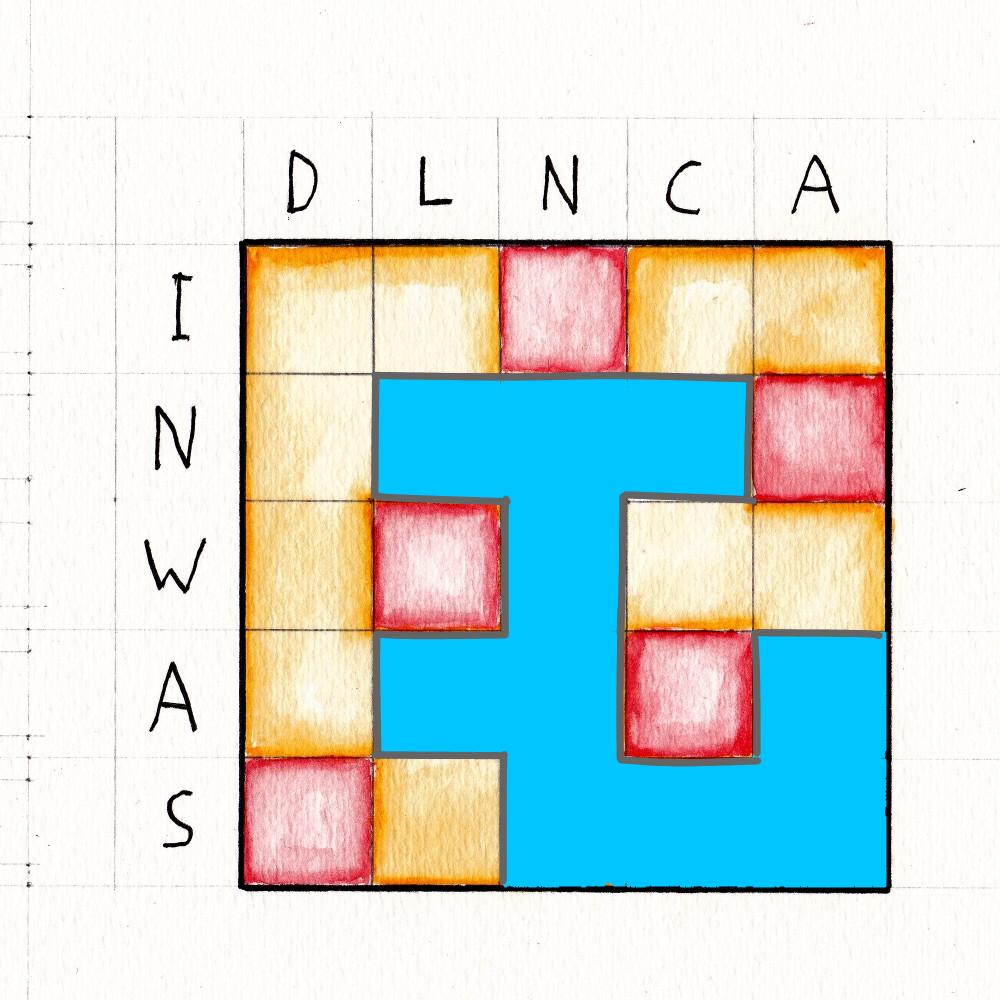 Now, adding shapes to the second image using the rule discovered in the first gives the new image 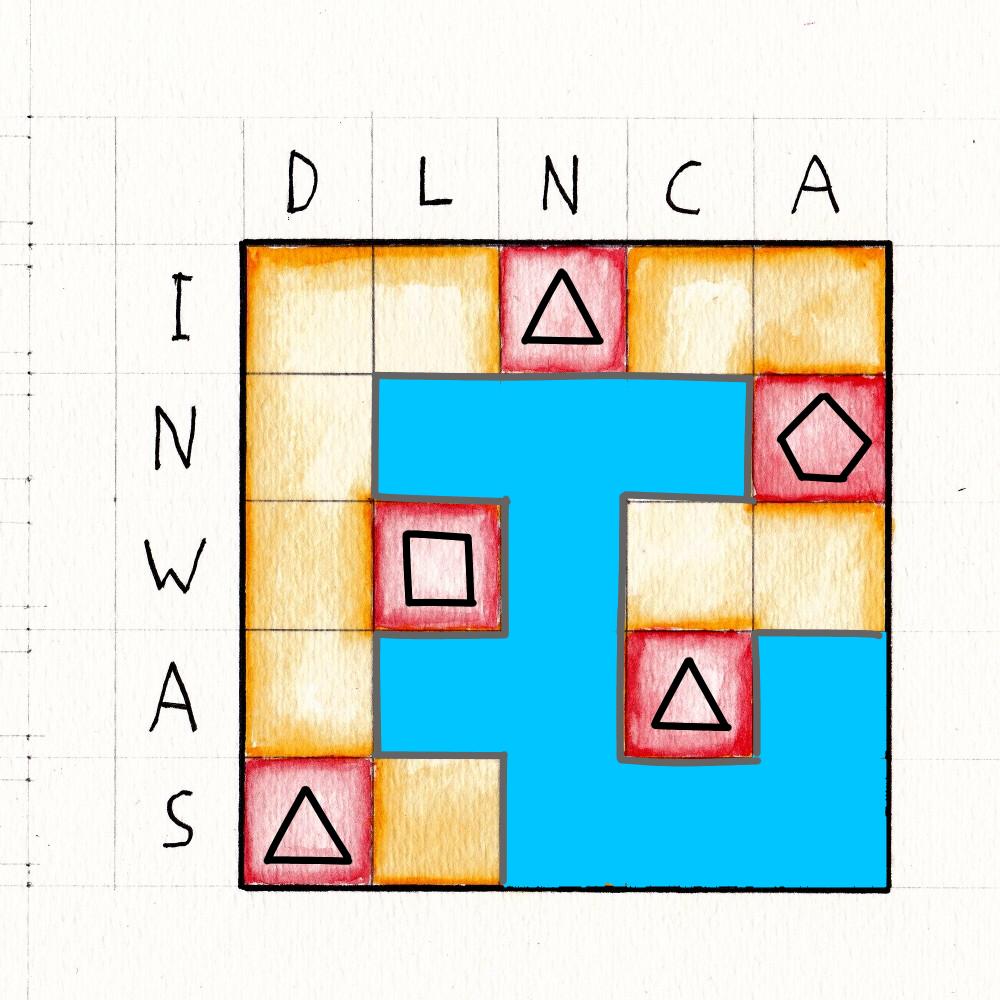 I believe the solution to the third image could be 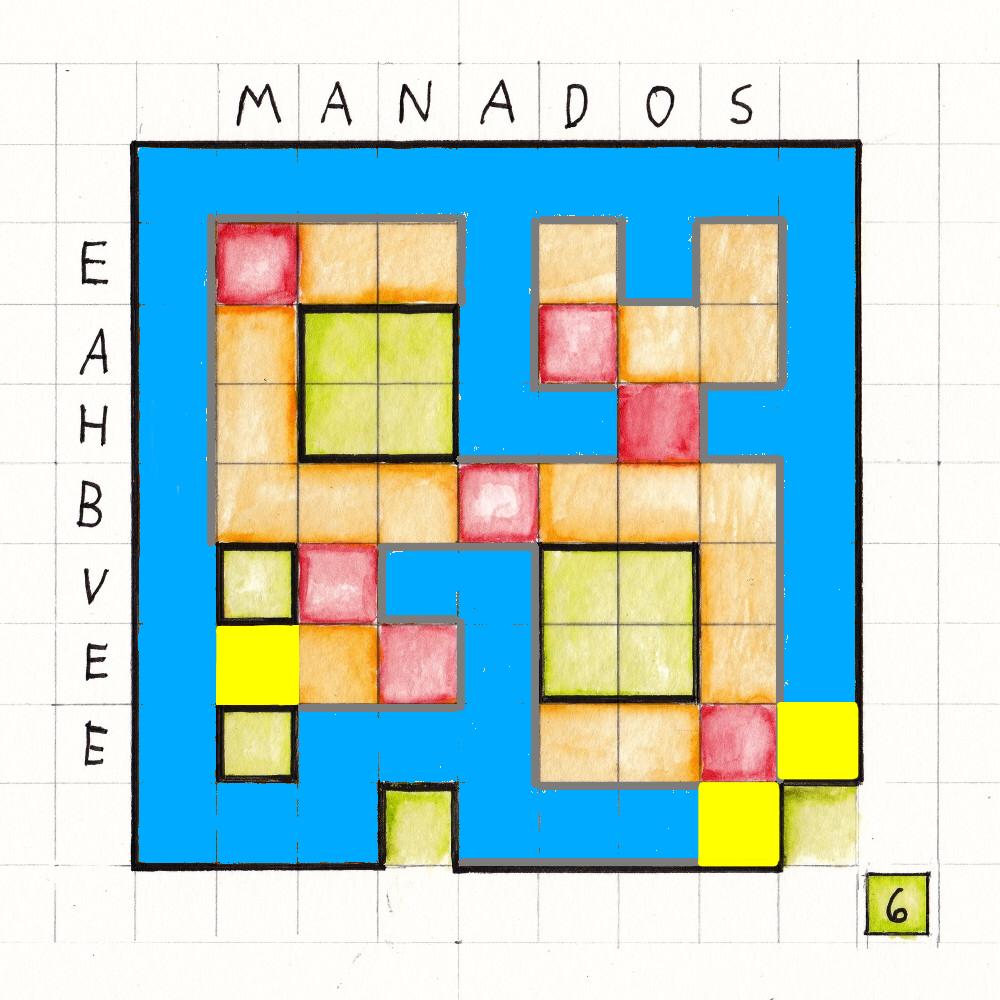 However, this solution is not unique as the squares highlighted in yellow could be coloured either orange or blue. Also, if we consider the 4x4 square at the left corner as well as the one directly above, neither contain an orange square. I do not know if this is allowed.

overlay the last image onto 5th image and rotate it 180 degrees, you get this: 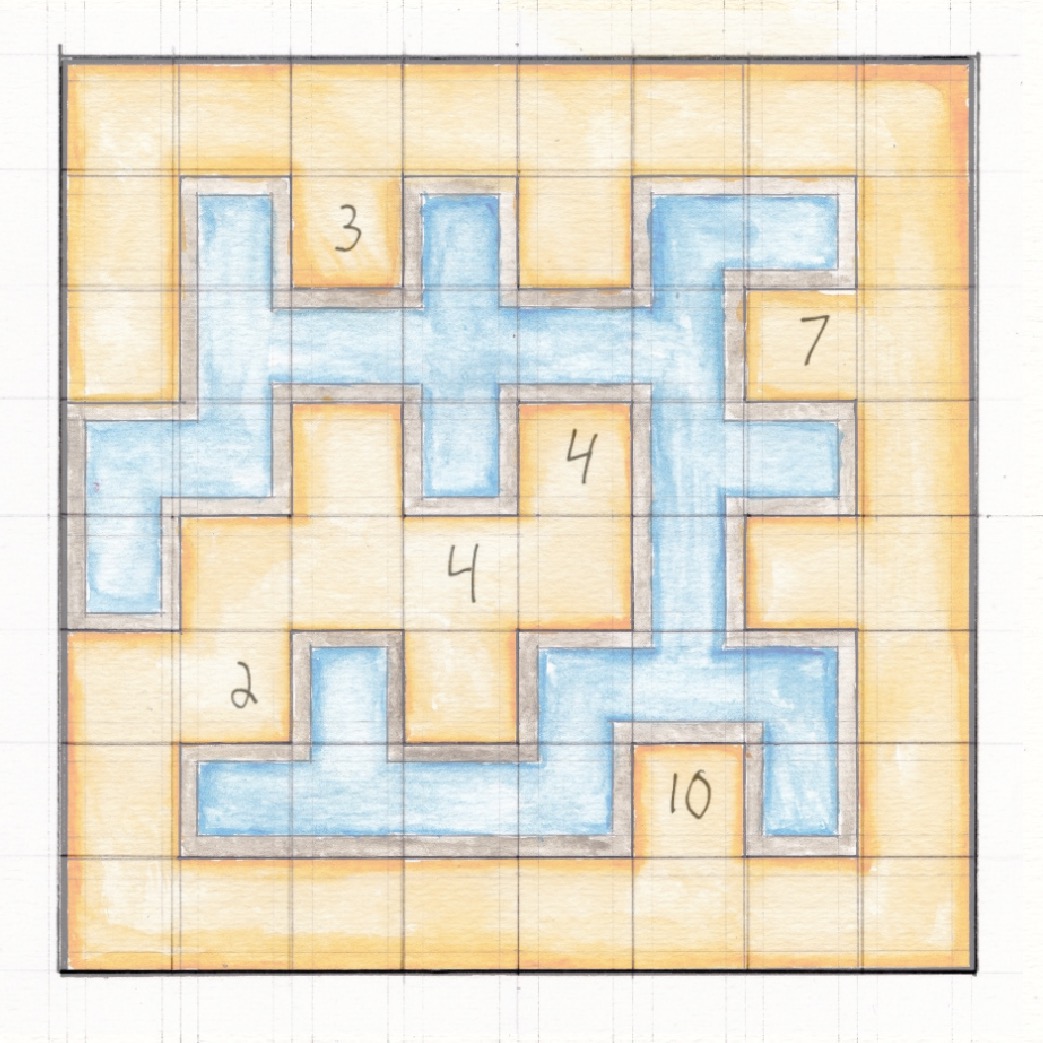 The numbers seem to correspond to the number of blue squares adjacent to it, except the leftmost 4 would have to be changed to a 3. 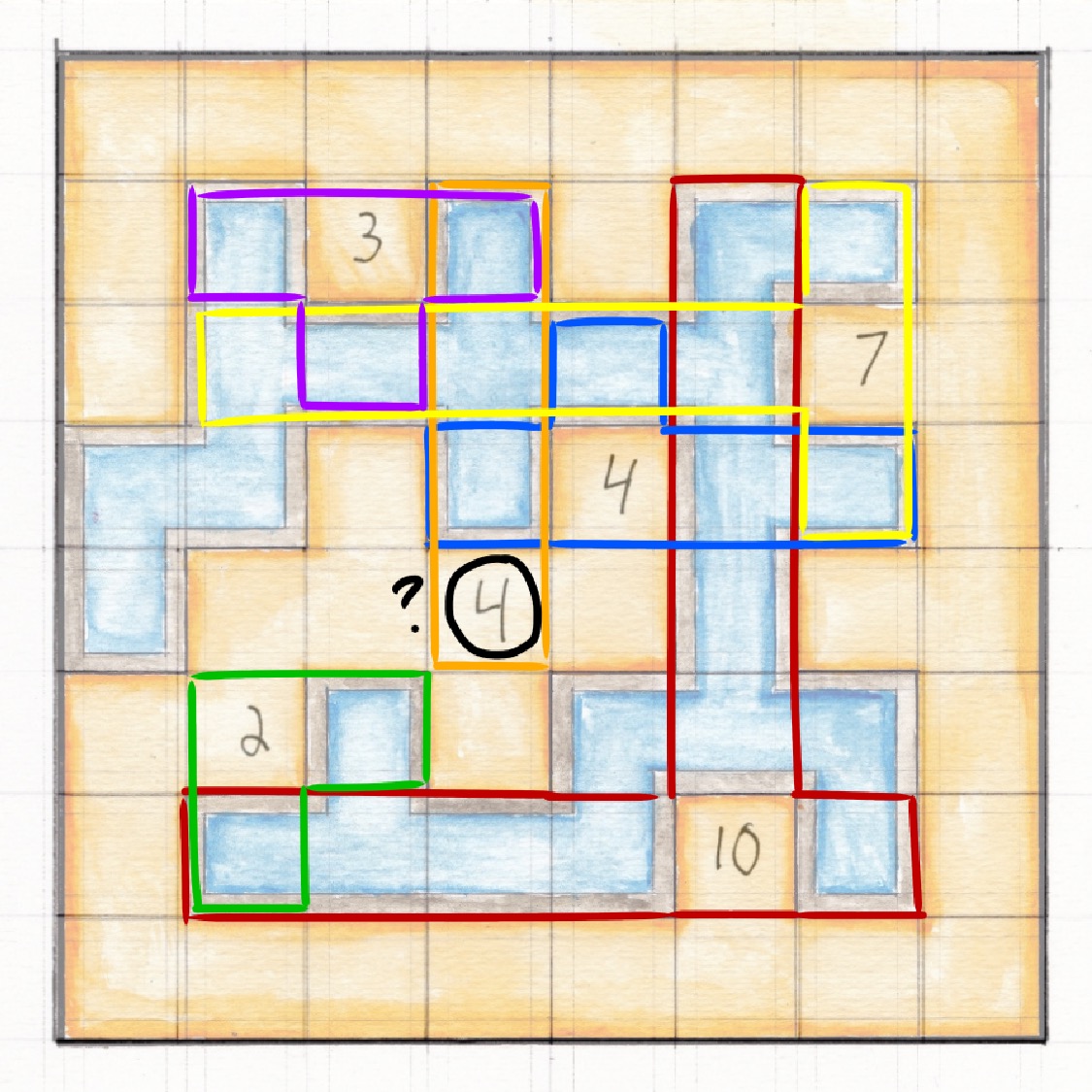 Let me try a different approach.

There is one red square in each row and column (fact). That provides us with a free pairwise collocation on rows and columns, or: on the letters written one the up and on the left. This collocations for the first three images (yes, that is a lot of examples!) give you:

Drawing a line through letters is convenient, if we turn around at every collocation (woosh! - left, woosh! - up, woosh! - left again, diving in and out). Now for the first two anagrams are already found, they were just not as explained.

The third one was harder but still doable (I didn't find any more clues to this one). It's more informative:

So, we're talking locations. The hardest part is still to come. The next picture is missing the squares, and anagramising it as is is close to impossible. Yet, we have numbers and experience of as4s4hetic.

THE RULES:
1) There is water and sand. Red is sand (yellow as well). Neither can fold into 2x2 squares. Either is connected.
2) There are trees. Trees are green and square. They are neither sand, nor water. Also, they (probably) don't touch sides of each other.
3) Red sand is in every column and row once (since we already have letters in every row and column)
4) Most important: numbers. Numbers in "water-layer" tell us, how much water in this row/column. Numbers in "tree-layer" tell us, how much wood in this row/column.
5) This '6' in the corner isn't there for fun. It means that we have 6 trees.

That is more than enough to solve the Ncarozple scheme. I'll try to take it slow, because you may not know where to start. 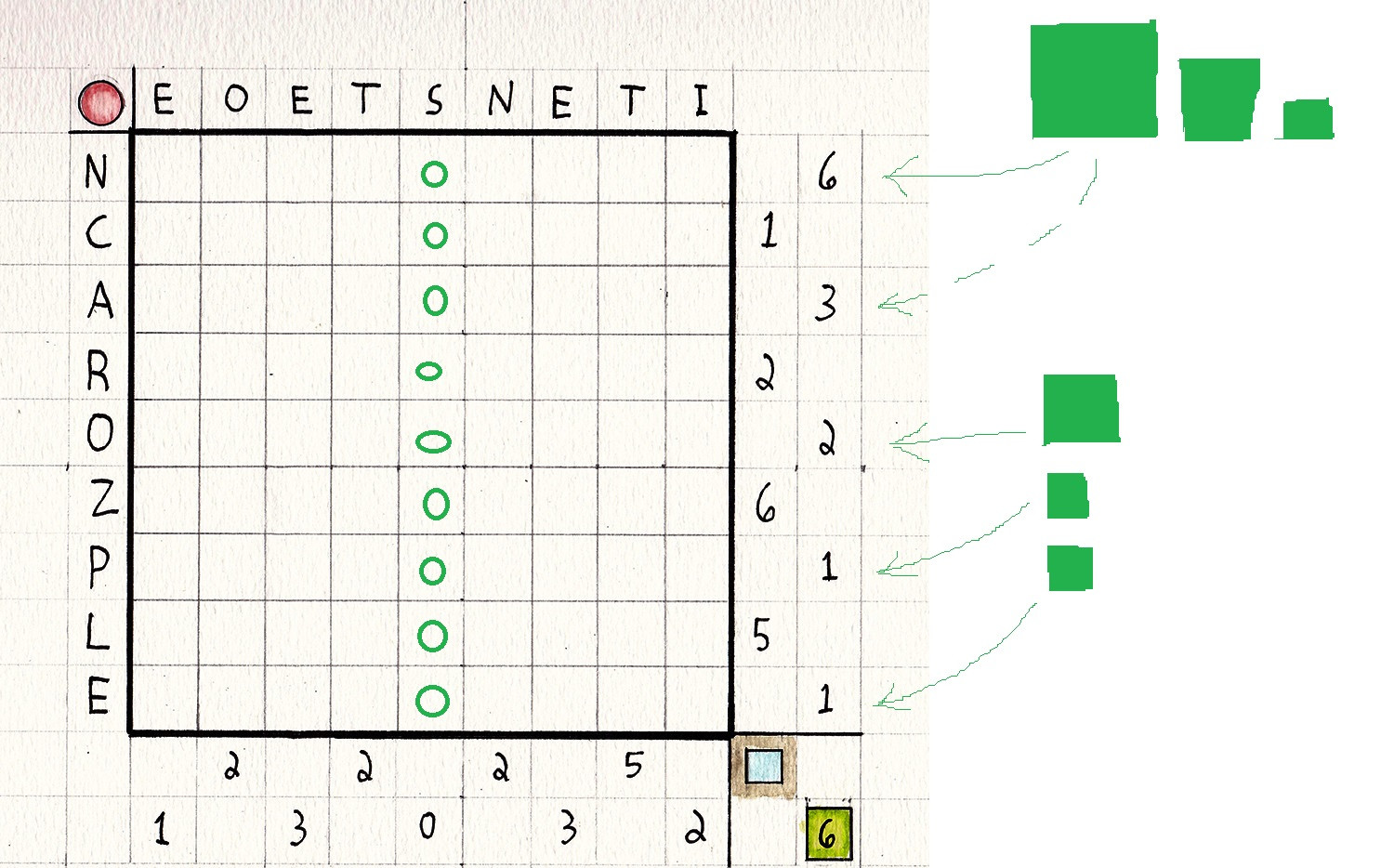 Let's wrongfully assume the 3x3 tree (read as: treetreetree) is on the right of the treeless line. First, water-5 on the down wants to fill the column (there is place, even one left for the red sand). Then we can locate two 1x1 trees (on the right). But then the down-3 can't be a 3: it's either 2 or 4 (check yourself)! Reductio to absurdum, we get the 3x3 tree to the left. 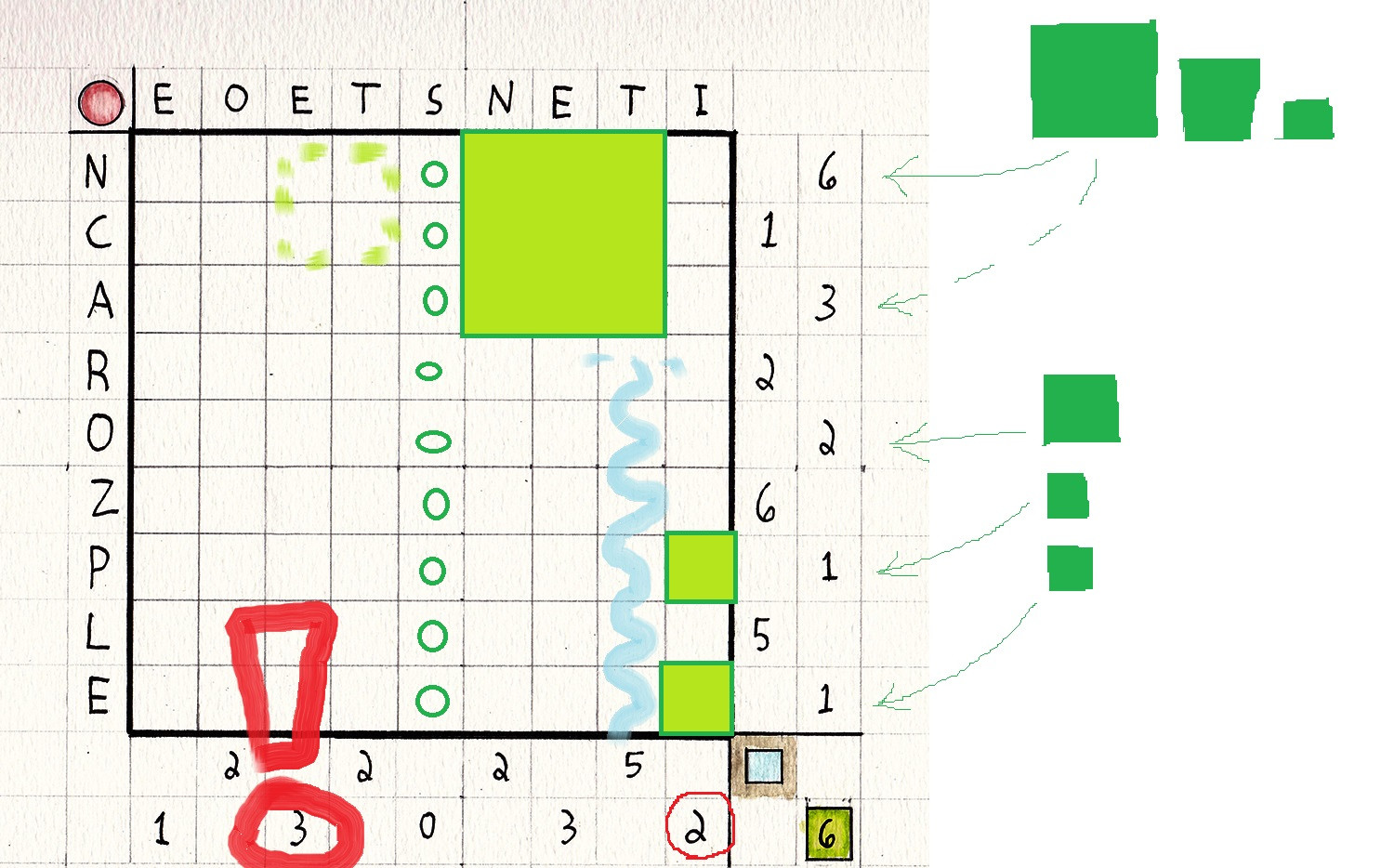 Step 3 (I just don't know how to divide spoilers actually):

The 1 and 3 on the down are odd numbers so they require the 1x1 trees to be near. The rest is easy, up to a point that we don't know if 2x2 is up or down and this 1x1 ships are in one of two ways. But now we can start placing water to find out. 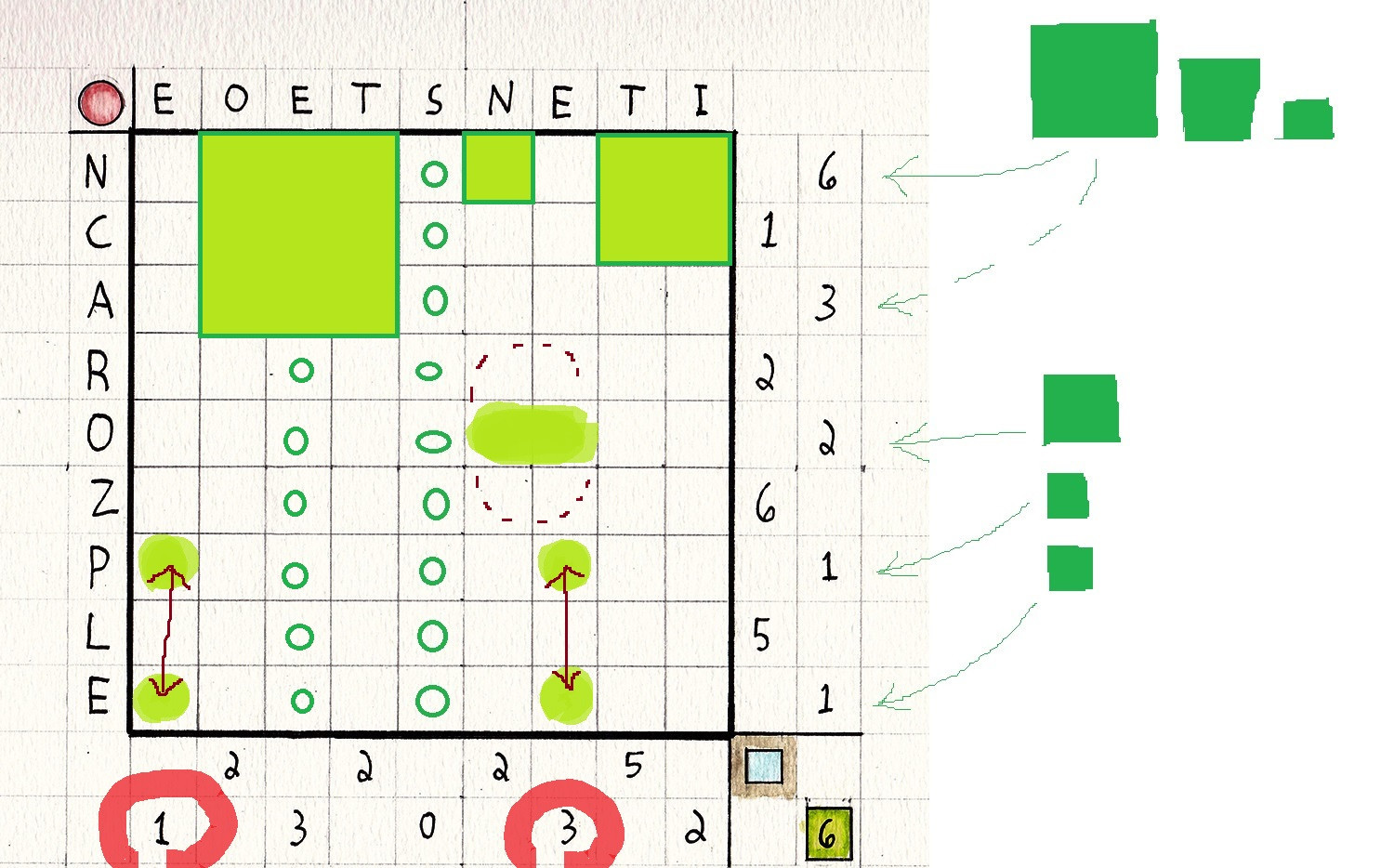 Now comes, what I called "Edge theorem" (I never tried an Yin-Ang before).

If you go along the border in Ying-Yang puzzle, the color changes maximum (and usually, exactly) twice. The reasons for it are connectiviness. What's more important: if we put trees like this, the border creates two points that require to change color (2x2 squares). That results in all the up-part being one color, that counteracts with 1-row. 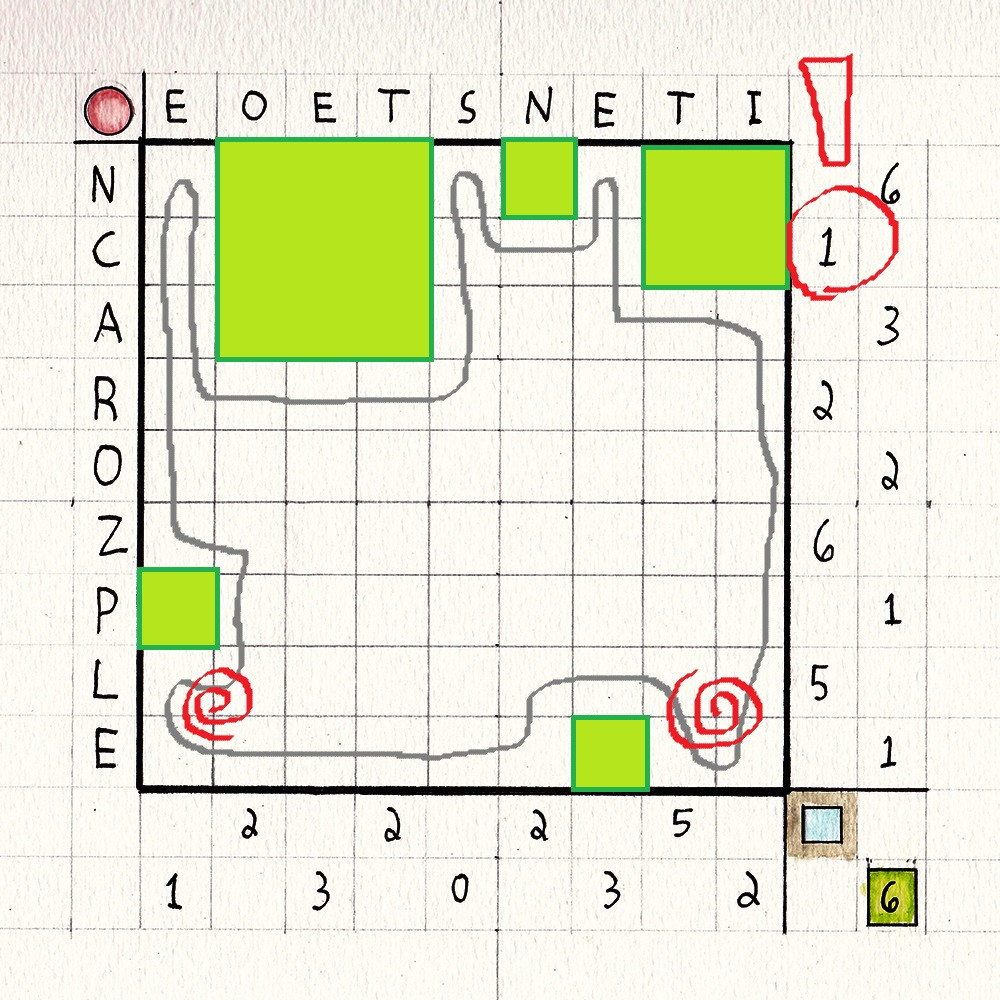 We have the trees made, the only other non-Ying-Yang idea I want to use - since every row and every column is supposed to have a red sand, therefore, sand-border goes along all 4 sides, and water-border: 2 maximum. That gives us a take at the borders. The rest is pretty clear. 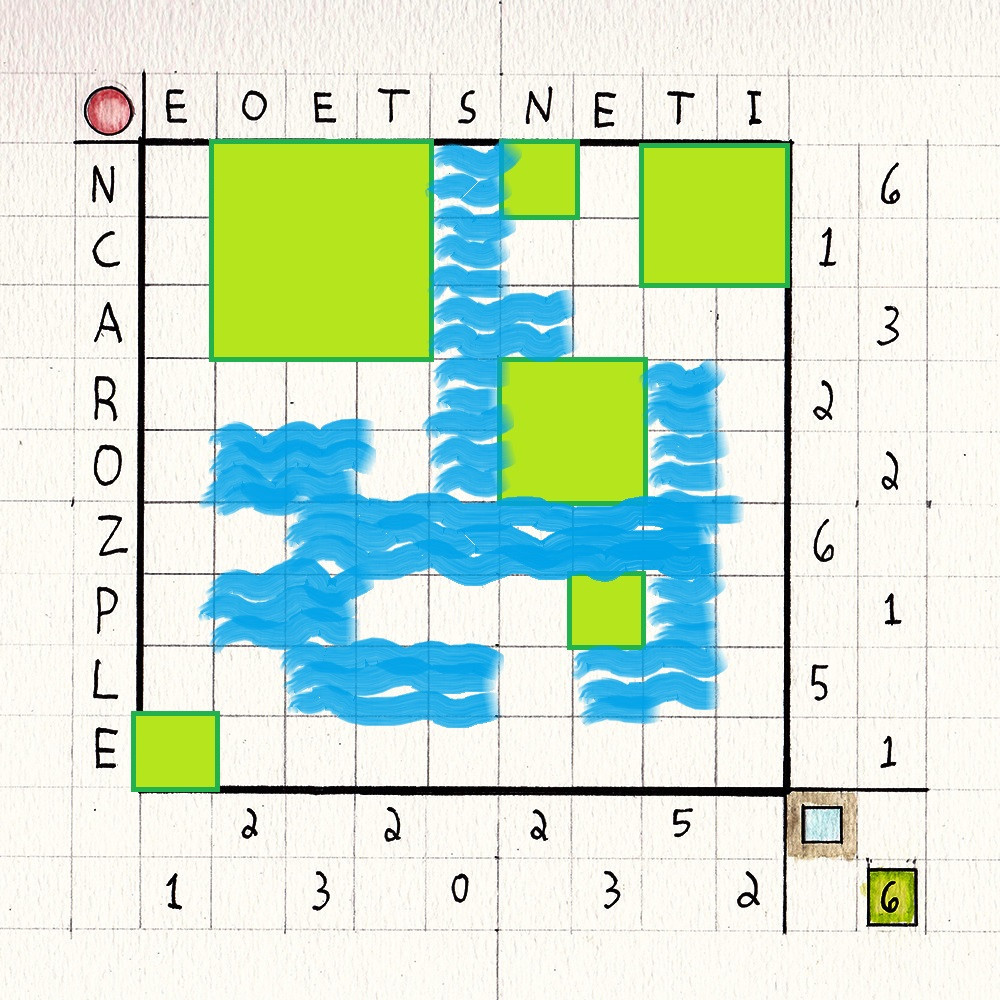 Now, you would ask:

That's all very pretty, but where are the red squares and the order to read them and location of my dear friend?

Patience here. This data is not enough to find the squares. Probably, I missed something important on the rules or the idea of the shapes. But I can compensate with a mind-game.

QUESTION: What starts with Z next to O (or E, or I) and can be connected to locations of dear friends? It's a Zo-ne. And here it might also be a Dear-friend-zone (yeah I'm good at puns). Though only a hypothesis, marking Z-O and reverse N-E as red squares gives us all the others. Well, not all the other positions, but letters for sure. 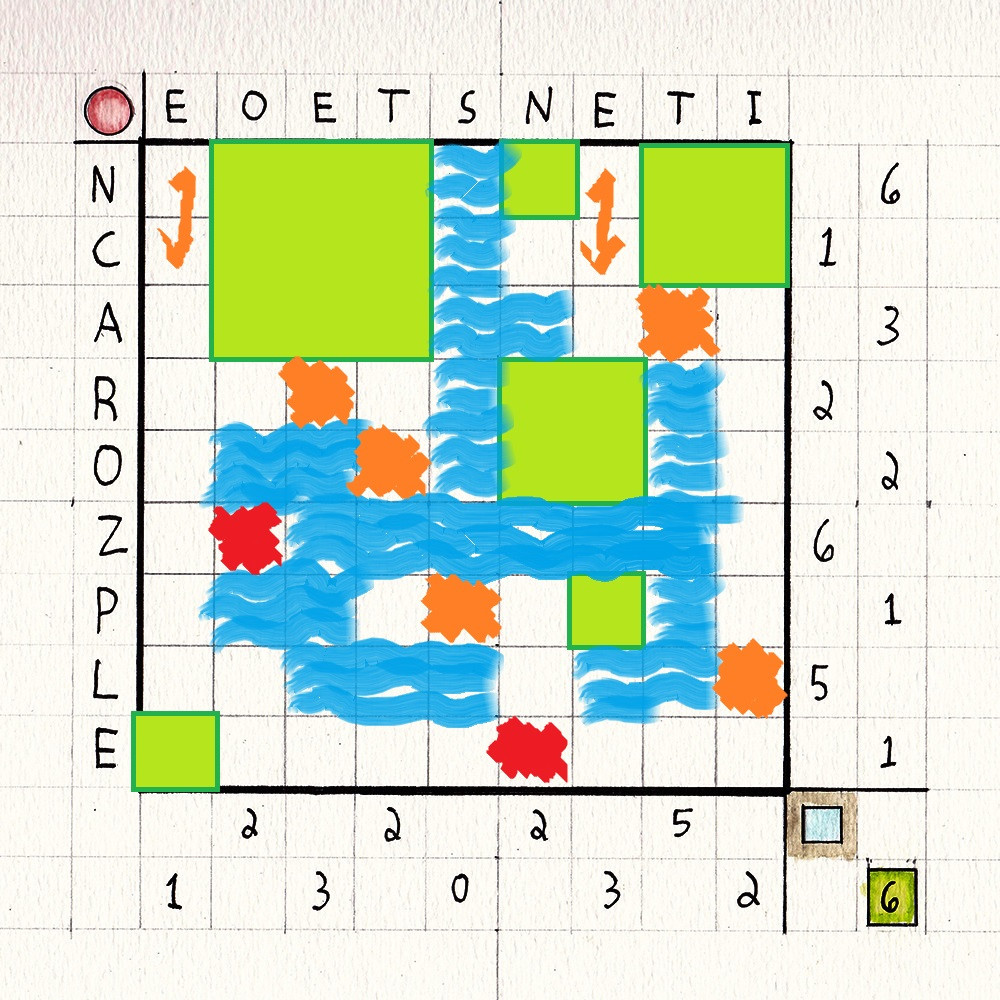 I spent a lot of time on this one (I still wasn't sure about a 'zone' assumption, btw) and somehow I ended up getting it. The next location hint is

Now it all comes together.

Nevada homebase top secret alien zone is definitely the Area 51. Or not? Unfortunately, I can't finish the decoding. I raise this theme from year ago to let you try once again.

Now, the assumption is:

Shapes are somehow derived from the (filled?) grid. Then, the shapes create order or pattern. This order was supposed to help order the pairs of letters (which I handled myself, so you can reverse-engineer the order I got). The pattern should probably be used on the secret drawer table, to get another message. I don't know if the vellum is needed anywhere.

We can interpret the panel as traversing a path to spell out various logic puzzle genre names: YIN YANG, CANAL VIEW, and FOUR WINDS. 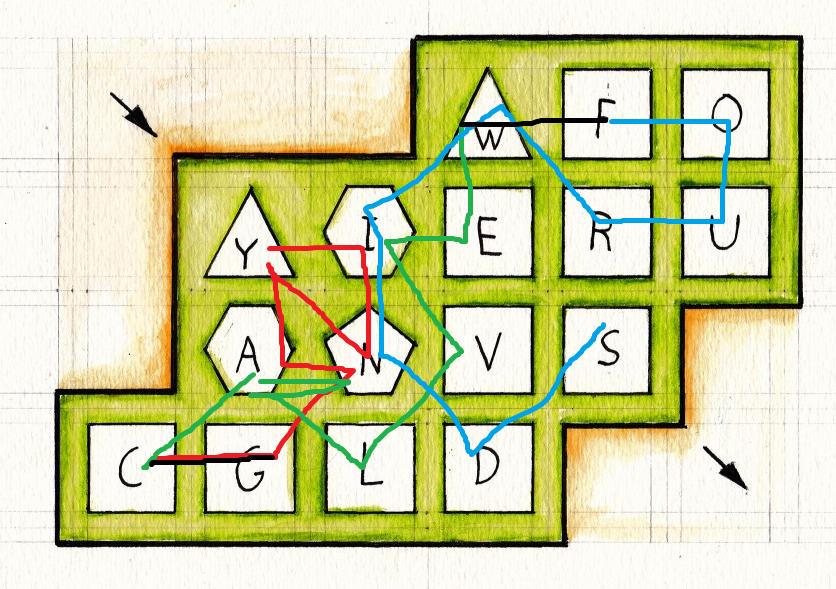 Notably, YIN-YANG is the mechanic used to separate water from ground with respect to all tree-less squares. CANAL VIEW is the genre similar to Corral, but instead of viewing squares of the cave, you view squares of the river instead. We see this in the last puzzle on the vellum. However, I haven't seen any part of this puzzle use FOUR WINDS mechanics.
At any rate, however, this could help us interpret the phrase "CANAL WINDS".

Furthermore, I would like to contest as4s4hetic's assertion that

The first one resolves uniquely using only Yin-Yang rules. 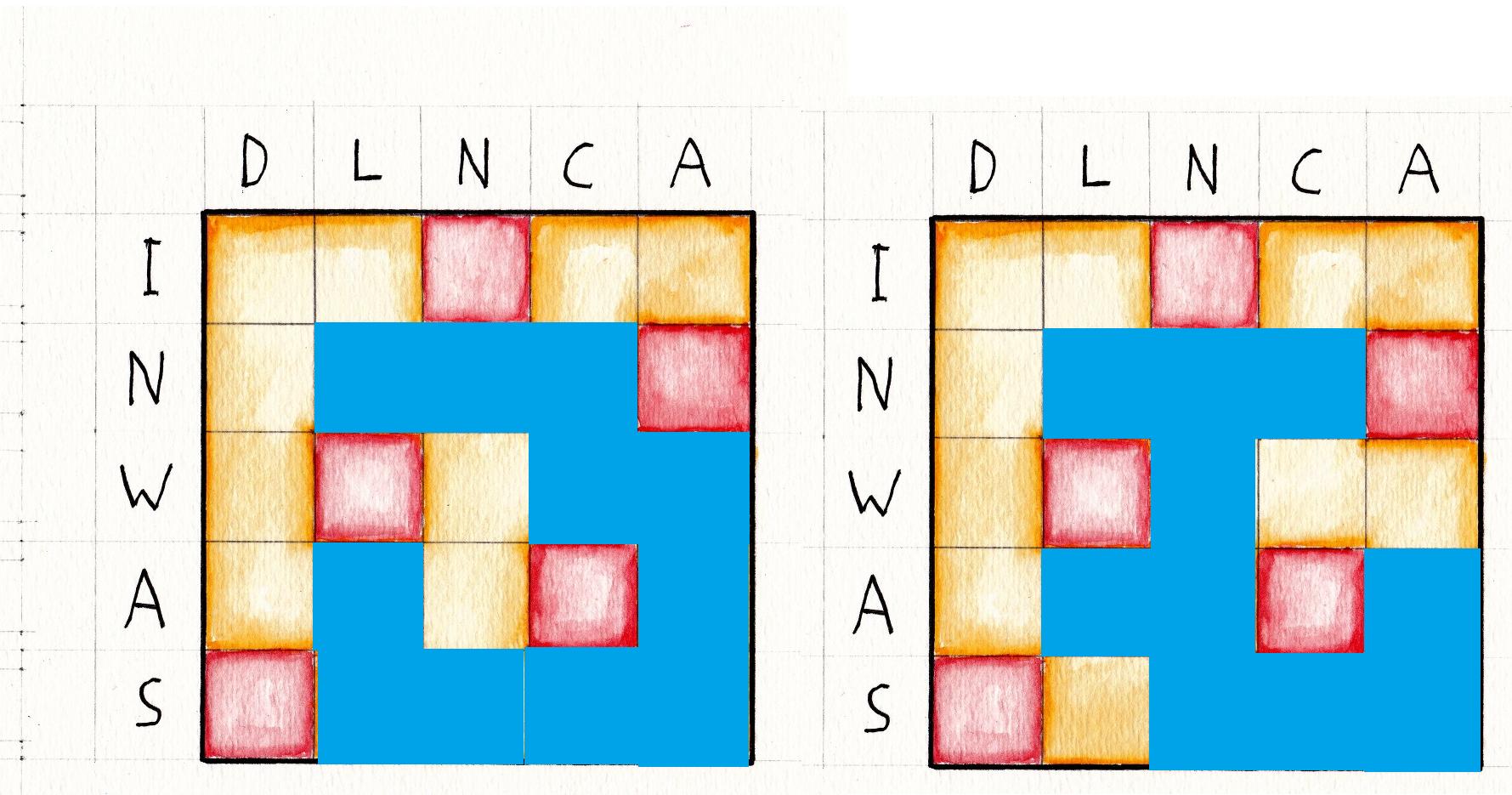 There are 2 solutions. Arguably the first one might even be better, with all red squares adjacent to the river.

In the path that phenomist found through the image with the shapes and letters, we can observe that there is a link between the shapes and the number of times that the path traverses the shape. More specific: the squares are traversed once, the triangle twice, the hexagons trice and the pentagon four times. This gives us a way to link these shapes to numbers from 1 to 4.

Applying this to the first picture,

we get the following numbers on the red squares: 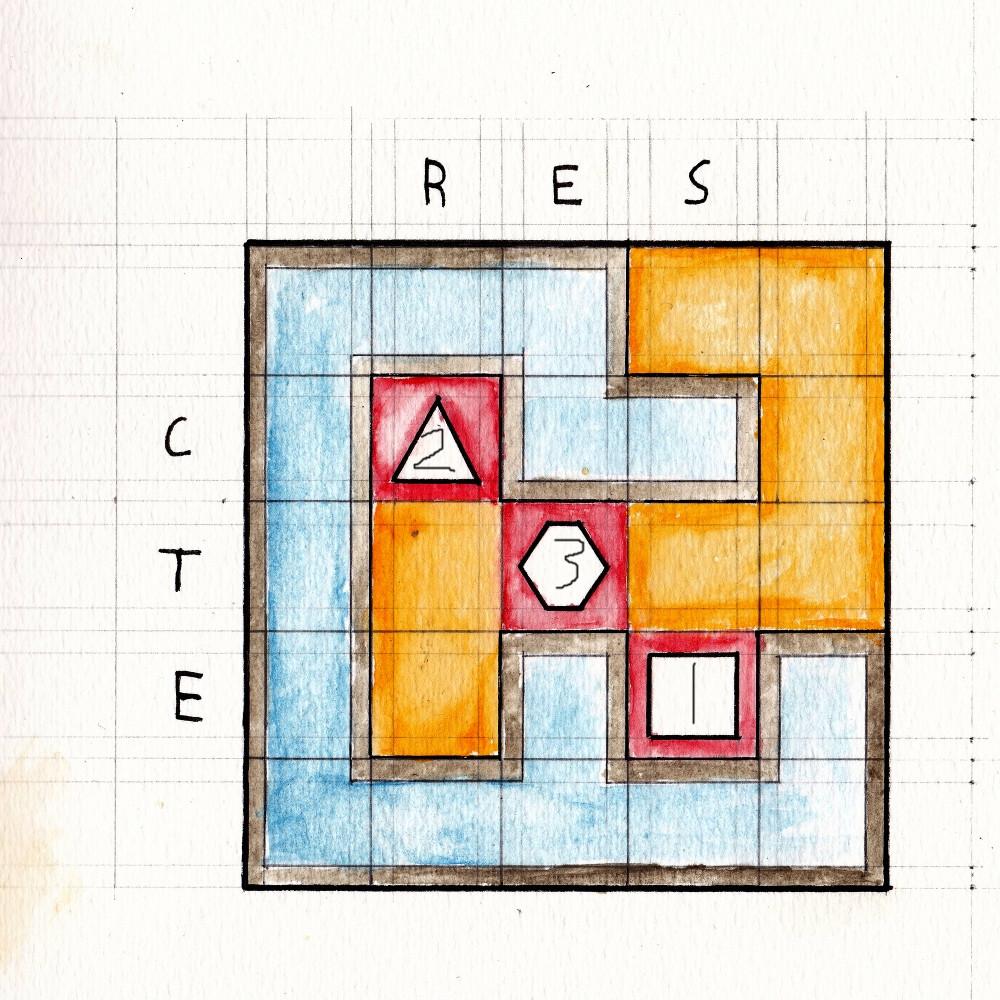 These numbers correspond to the order in which the solution "SECRET" can be found, but also with the numbers of orange squares reachable (in a straight line) from each of the red squares.

Now we can try to do the same to the solution of the second puzzle found by as4s4hetic:

Numbering the red squares in the order used to find the solution "CANAL WINDS" gives: 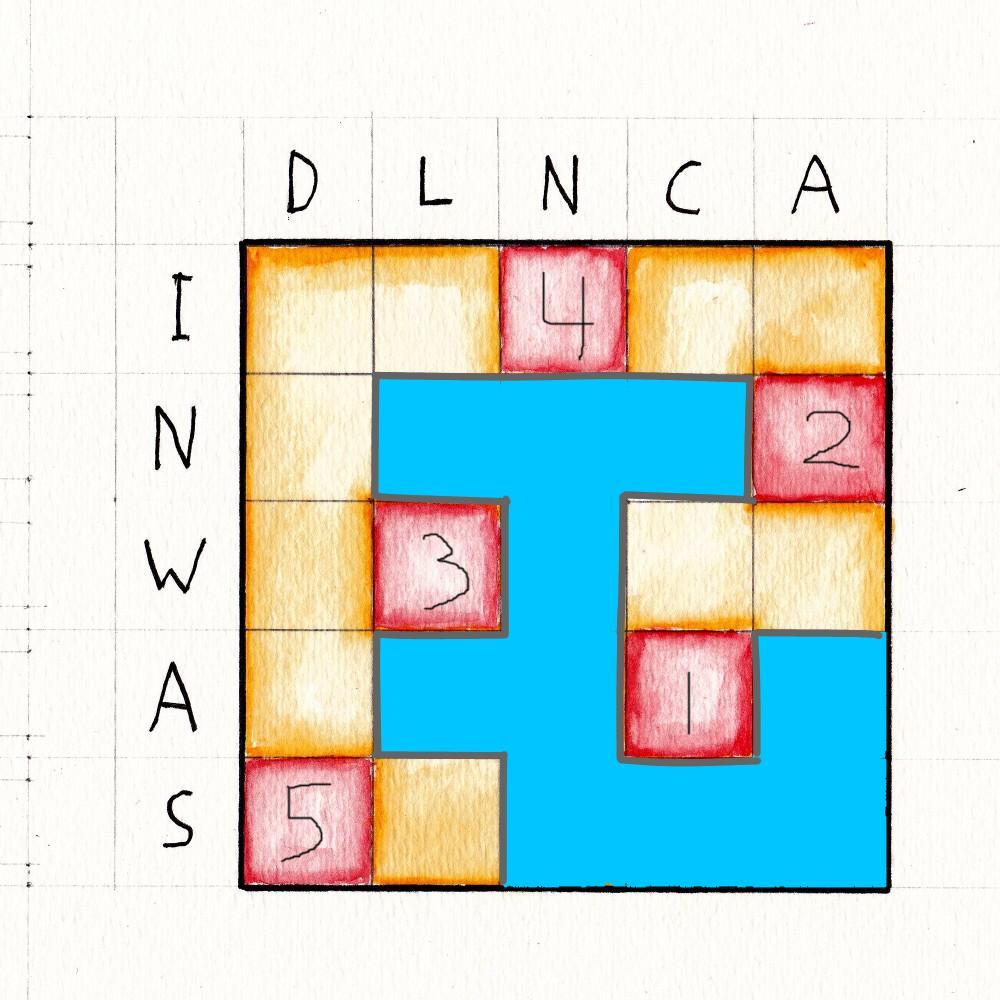 We can also apply this logic to the third puzzle, solved by as4s4hetic: 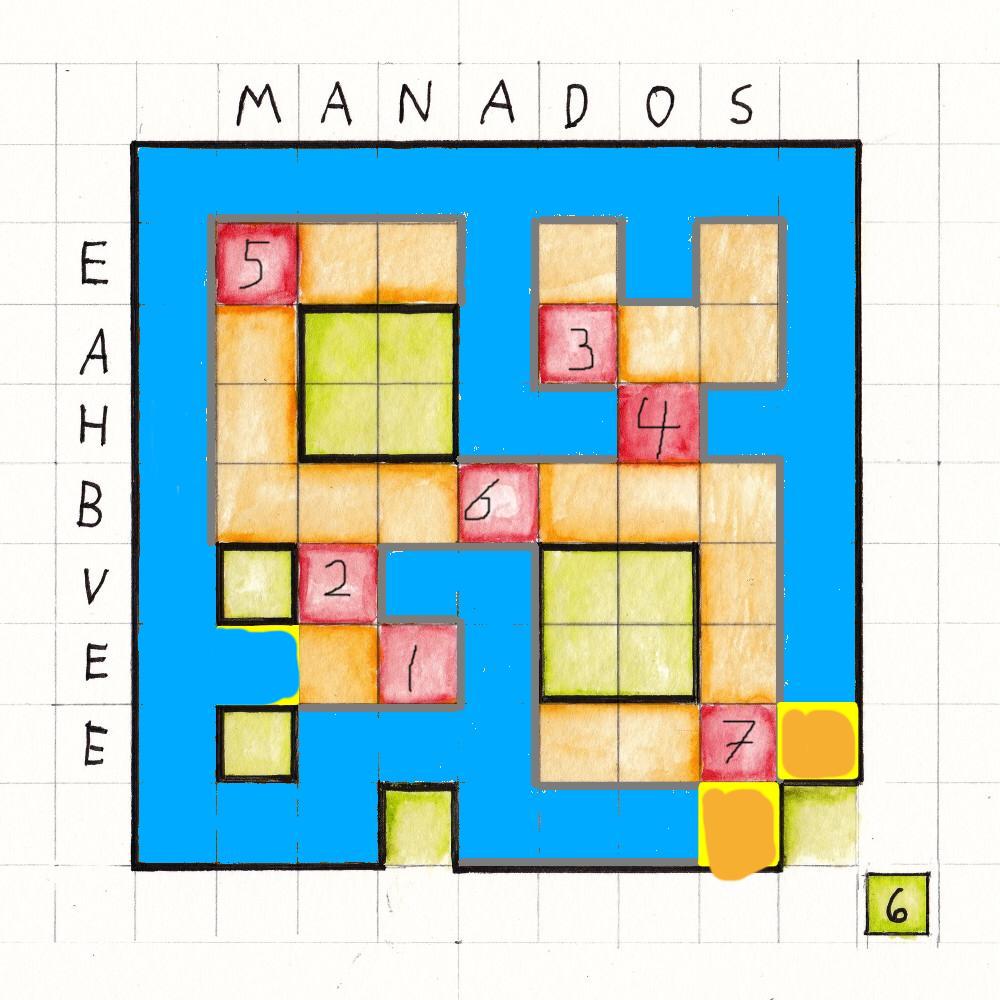 And to the final puzzle, solved by Thomas Blue: 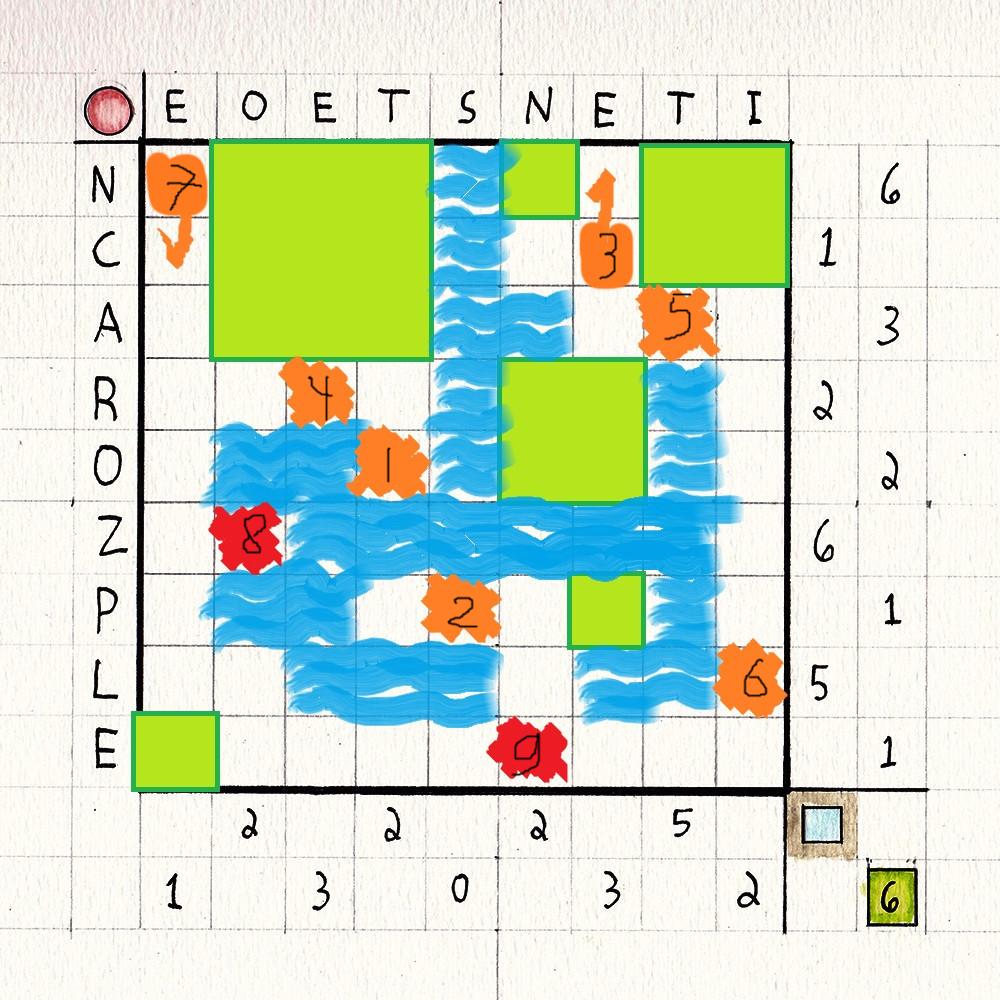 The final mystery left is what to do with the drawing pinned on the wall...

Not the answer you're looking for? Browse other questions tagged enigmatic-puzzle grid-deduction reverse-puzzling or ask your own question.

1
A case of academic misconduct?
19
My colleague's search history
14
Discovering the past
15
Killing Entropy : the first byte
4
Can you find the missing lad and the treasure?
30
Parallelisation
81
My God, it's full of stars!
10
The highly public trial of Capo di Tutti-Capone
25
Where will this killer strike next?
15
Just another day in the Shack