Puzzlers, I am presenting a set of six duo-grids! Of course, I need to tell you how they work - you are given a grid. Looking at it, you are given the two puzzle types embedded in it and the operation. You are also given the values for some of the squares. Because some of the puzzles were... difficult to make, I have modified some rules to existing puzzles. In retrospect, this is pretty much the same as my Adderlink puzzle (see there for an example). Ultimately, the goal is to deduce the two sub-puzzles in each puzzle. So, for example, if I had a 5 in a square and the operation is addition, then I know that I have to have either: 0 and 5, 4 and 1, 3 and 2, etc. in the puzzles (if you still don't understand, just click the adderlink above, the rules are the same except that the puzzles and operations change). 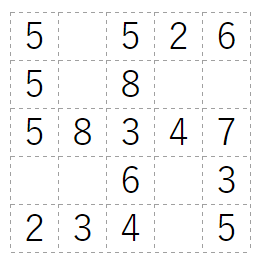 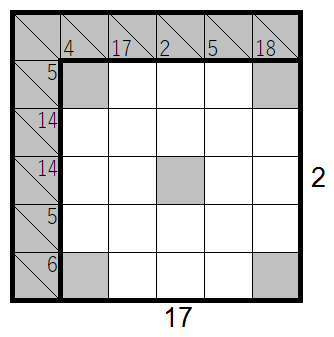 Grey squares mean that nothing goes there for the Kakuro ONLY, and also the Kakuro has the additional property that no two squares are the same horizontally, vertically or diagonally including through the center square.

$\color{red}{\text{user39583 proved that this puzzle's ambiguous; see his solution for the intended sol.}}$ (don't forget to +1 his solution!) 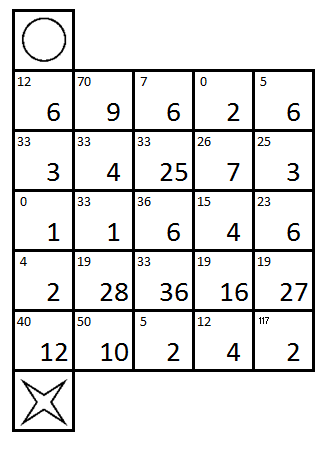 Lastly, the Kenken has numbers 1-6: at most one of any number in a row or column

The Haisu was used with permission from TGE 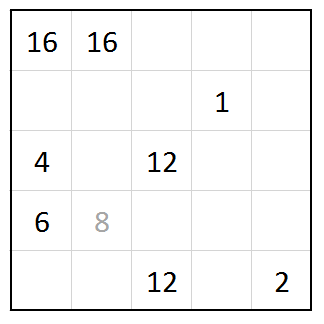 Well, they were the names I found on here (Don't worry, there are English explanations). Two things: The Nachbarn regions do not necessarily have to be the same size. And also, although every black number has to be in its own region, the grey one does not. 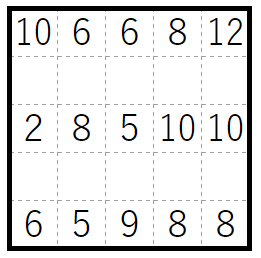 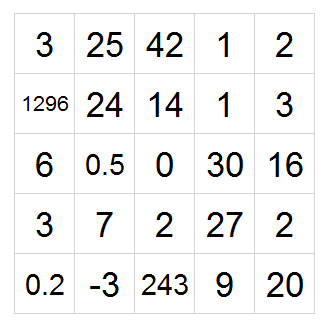 I'm extremely sorry about the gross underestimation of difficulty in this and the inconvenience therecaused. Sorry to all attempters who attacked the earlier version without this picture.

Any queries or comments, feel free to ask below. I will answer any question about how the puzzles work

There is almost a 1-1 bijection between squares and letters

The puzzles come in pairs; the extraction also deals with them in pairs

Each square corresponds to a letter, much like in a polybius cipher. Then you need to do some anagramming

The final solution is

The solution can be found by

taking the squares in a duo-grid which have the same number in both grids and taking a corresponding letter from a polybius square. Anagramming these letters gives two sets of words, first for anagrams from all individual puzzles, second for anagrams for a fixed number from all the puzzles (e.g. gathering all the letters from all the puzzles that have number 1 in them):
\begin{array}{c|c|c|}&Puzzle&Number\\\hline1&dive&devil\\\hline2&coli&logic\\\hline3&ughs&utes\\\hline4&basil&braid\\\hline5&reload&halo\\\hline6&tend&dens\\\hline\end{array}

Reading these letters from top to bottom gives double vision.

Here are solutions to all the sub-puzzles, but since it is a metapuzzle there should be some way of using them to get a final answer, which I haven't figured out yet.

First just the solutions for easy finding because this is going to be long:

Kakuro $\div$ Skyscraper
The solution for this puzzle isn't unique, so here is the solution intended by OP

The operator Latin square for Grid 6 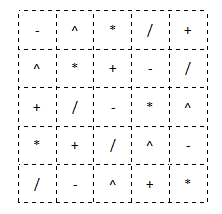 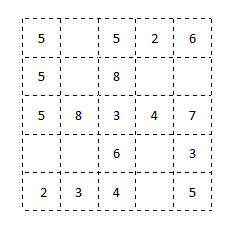 3 is the maximum cell value in Slitherlink and 5 in Sudoku so 8 = 3+5 giving also 7 = 3+4, since the 5 in Sudoku is already taken on that row. Because the loop in Slitherlink cannot touch itself, we can also deduce some borders around the 3s.

If the upper right corner had a 5 in Sudoku, it would have a 1 in Slitherlink, which could only go below the cell. This would eventually force the border to form a small loop in the last column, because of the 3 there. Therefore the only possible place for the 5 in the first row is the first column. This also gives the remaining 5s.

After this it is fairly straightforward to fill the Sudoku starting with the first column, then filling the 4s, then 3s and then the rest.

Then it is easy to fill the slitherlink starting from the first row and going downwards. 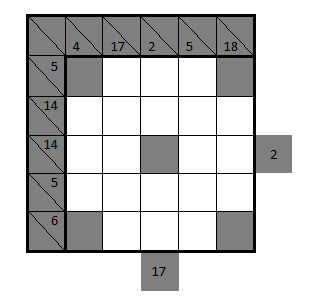 There would be solutions both for the remaining column and row sums being 6 and 8 or them being 8 and 10. Therefore I assume that the rule that the row cannot contain same numbers also applies for the sums, making the solution for the column sum 8 invalid. This logic doesn't work too well however, since the 18s are on the same diagonal.

Now the second cell of the fourth column cannot be a 4 because of the diagonal so it must be 6, giving also the last row. The 1 of the fourth column must now go on the third row giving the rest of the Kakuro. The solution for the Skyscraper isn’t unique and I have found 7 different solutions. Two of them can be seen below, where the remaining empty cells can be filled by two different ways. Note that this is not the intended solution of OP. The intended solution has been added to the list of solutions at the top. 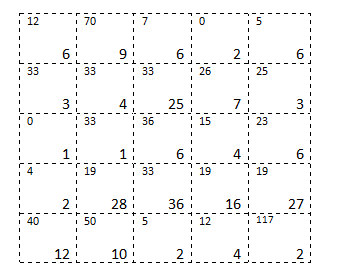 We can start by noticing that the 28 can only be 7*4, so the Haisu region containing it must contain at least seven cells. Since there is a long connected region where the litlle numbers are only 19 or 33, and furthermore 19 = 26-7, 33=26+7, we can guess that those form the region, which is entered 7 times in Haisu and for which the sum of cells is 26 in Kenken. There is two possibel ways to draw a path which enters the region 7 times, but only one of those is possible with the given numbers.

The sum of the remaining 3 cells in that region must be 6, which leaves only one possibility. The first row must have 4 cells in the same region to find a solution for the little numbers.

For the last column the solutions are found if there is one cell by itself and the other two in the same region. Then the three remaining cells in the upper right are also together in their region.

Now, I believe there must be a mistake in the last row, since the only logical solution for that 117 would be 120-3. Since it is in the corner, this would require the size of the region to be at least 4, but no matter which cells you would select, there would always be at most 3 possible cells. If the small number 50 is a mistake, and should be for example 5, 40 or 45 then we can find the following solution 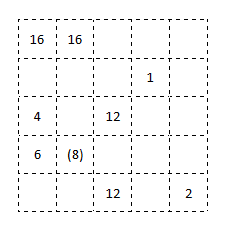 The 1 must be 1*1. Since no region can have 8 neighbors, the 16s must be 4*4. The one in nachbarn means that some region must fully surround the region with the one, but it cannot be the region with the 12, since that wouldn’t leave enough roome for both the 4s. There fore it must be the 4 on the right which surrounds the one.

Now in the Nawabari the first two cells of the third column must belong to the same rectangle, which implies that there must be a 2*2 square below the 4s. Also the third cell of the first column must be it’s own region in Nachbarn with two neighbors. The lower right corner must have two borders in the Nawabari, so it can have only one neighbor in Nachbarn. The 4 region coming from the upper right cannot be that neighbor, since it would make it neighbor to the middle square in the last row as well, and it would thus have 5 neighbors. Therefore that region must end in the middle row.

There is no way in the Nawabari, which would work if the ? in the first column were 3 and the ? in the last row were 4 at the same time. This means that the ? in the first column of Nachbarn cannot be 2, because there would be no way of making the ? of the last row of Nachbarn a 4. Therefore the ? in the first column is 3 in Nachbarn and 2 in Nawabari. This means that the extra hint (8) has to belong to the 4 region coming from the up, because it has to belong to a group with 4 neighbors and if it belonged to the middle ? then the 4 region from the up would have only 3 neighbors, and if it on the other hand belonged to the bottom ? then the just found 3 region in the left side would have only 2 neighbors. Since the 4 region cannot be connected to any more neighbors after that, we can also connect the 3 region to the bottom ? and extend the middle ? downwards.

Now since the bottom ? has to have at least 3 neighbors, it has to be the one surrounding the corner 1. Now we can also deduce the rest of the Nawabari. 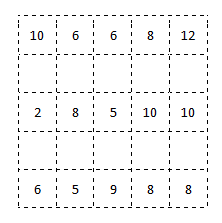 From here it is quite easy to see the final solution for the Fillomino and we can also find the only possible way to fill the remaining Ripple effect cells. 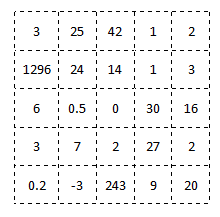 It is quite easy to deduce the most probable latin square for the operators.

This gives also already some of the numbers as well as long as we assume some reasonable upper limit for them.

We can already notice that the middle cell of the first row must contain a 7 in one of the puzzles. One puzzle where such a large number is possible for the edge is Seethrough (also goes by some other names), where the numbers denotes how many cells can be seen in horizontal and vertical directions before hitting a wall. However, neither puzzle would work for the 7 if the cell isn’t also counted itself like I believe is usually the case in Seethrough. If we count the cell itself also there isn’t a problem at least yet so we shall try solving the first puzzle as Seethrough and put the 7 there. I will erase the known open walls.

The upper right corner cannot see the 7 because it is at most 2 (assuming positive numbers also for the other puzzle). There must be a wall between the 3 and 7 as well. This gives only one possible way for the 7 and solves the neighboring 5 as well.

At this point the right side puzzle starts to look a lot like Shikaku especially when we take into account that 30* is most likely 5*6 and 20* is 4*5. Assuming it’s Shikaku we can already see the shapes of the 4, 5, 6 and 2 regions where we can deduce the second 2 region by noting that it will have to go to the 16^ cell. Filling these in we get

Filling most of the Seethrough walls is now easy. we can also see that the 3* cannot be 3 in the Shikaku so it must be 3 in the Seethrough. The 3 region in Shikaku must be in the 3 middle cells then followed by another 1. This gives the final solution

6 at upper right forces the loop to reach it from top side of grid and from right edge of grid. This means its adjacent 2 is 1+1. (Minimum allowed number of Sudoku plus the way both 8s forced the loop) Also, the 8 and the 7 in middle row together force the 5 of middle row to be 2+3 or 3+2.

Which in turn forces the remaining 5s in the Sudoku.

Allowing us to complete the Sudoku.

And then the Slitherlink.

Valid clues in Kakuro are based on number of cells the clues can see before first hole. Based on this, we can un-divide some clues right away.

Or at least narrow them down.

Not the answer you're looking for? Browse other questions tagged enigmatic-puzzle steganography no-computers grid-deduction metapuzzles or ask your own question.