Shooting a Laser Between two Mirrors

There are two large mirrors standing upright and facing each other, both 10 meters long. They are not quite parallel: if you extended them, they would intersect at a $1^\circ$ angle. The distance from the mirrors to this intersection point is also 10 meters. See below (the angle in the picture is exaggerated to make it more readable).

You also have a laser gun, which you plan to shoot at one of the mirrors so that the beam ricochets back and forth between them as many times as possible.

What's the greatest number of reflections you can get?

Assume that a laser will reflect even if it hits the very edge of a mirror.

To solve this, we first express the problem in a new way: Instead of having a laser bouncing between two mirrors, we have a laser moving straight through a different space; to accomplish this, we draw what you would see if you were standing in the setup - that is, where the mirrors are, we place a new, reflected image of the whole space! That is, we make copies of the $1^{\circ}$ wedge by mirroring it over the rays that bound it. The result looks something like this: 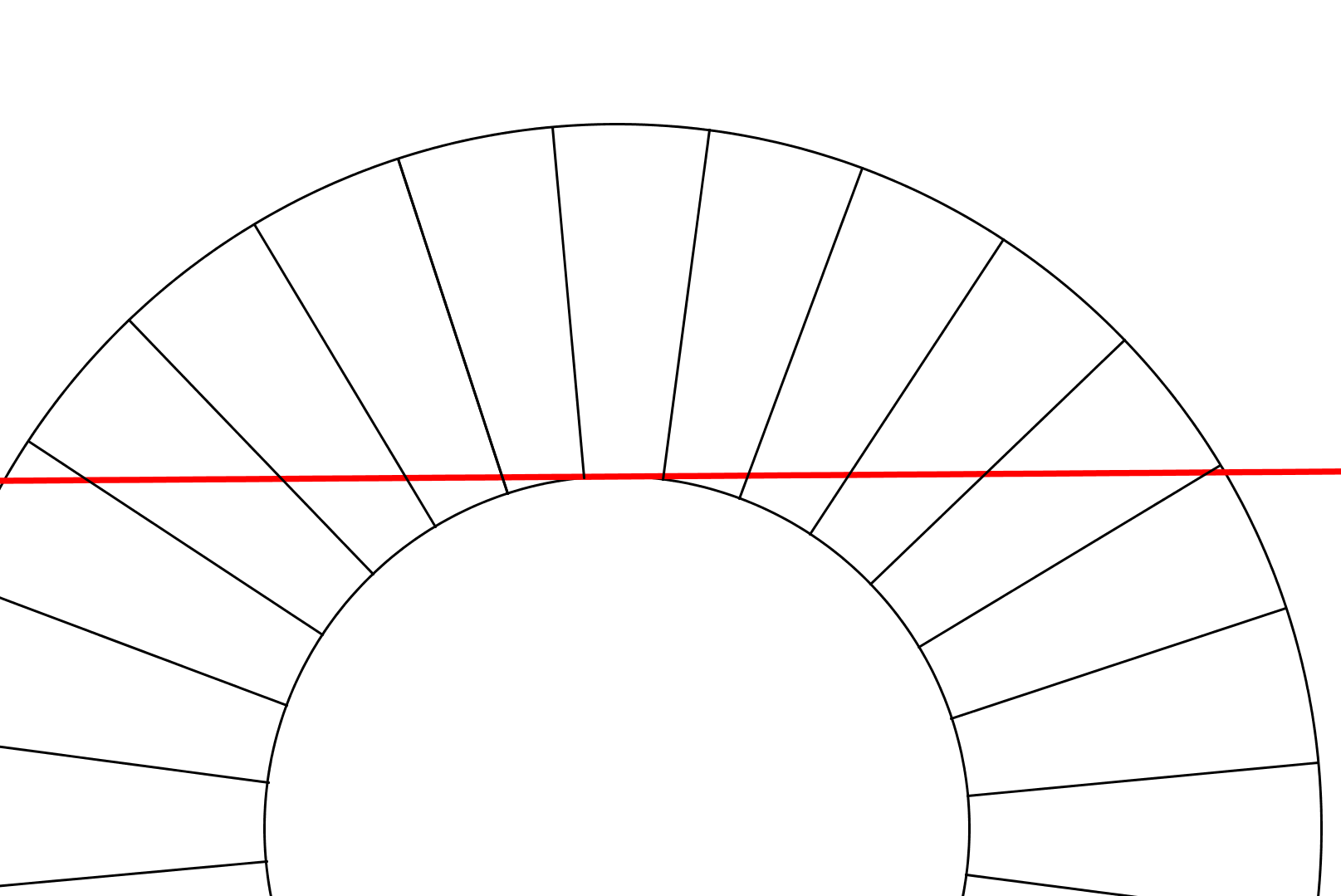 where the line segments represent the mirrors and the red line is the laser. This is basically what you'd see if you were standing inside such a setup (although you'd see many copies of yourself too). We may regard this as a sort of "covering space" for the old one as each point in the old one is copied many times into the new one.

This makes the problem simple: How many consecutive line segments can the red line cross? Well, let's call the distance from the center of the circle to the laser $d$. And, for simplicitly, lets call the radius of the inner circle $1$ and the outer circle $2$, since we only need to preserve the ratio between those measurements (which is 10m : 20m originally). Then, a laser crosses a line segment measuring an angle of $\theta$ to it if: $$\sin(\theta)\leq d\leq 2\sin(\theta)$$ We thus require that the smallest value of $2\sin(\theta)$ of any line we cross is at least equal to than the greatest value of $\sin(\theta)$ in the lines that we cross - otherwise, no suitable $d$ exists.

A picture of this would probably just look like a lot of red lines. However, the same logic applies if the angle between the mirrors were $5^{\circ}$ and predicts $25$ reflections. That looks like this:

Notice that it hits one mirror perpendicularly, and hence retraces its steps. In other words, some advice:

Don't look in the direction you point the laser.

23
Digging a tunnel between random locations
7
When is the area between the hour and minutes hands equal?
8
The distance between David and Eric
9
Rope between 2 poles
10
Laser Beams in Helsinki Skies
16
The Lazy Laser Physicist
8
Combine two squares into a square with the sum of the two
4
An angle between diagonals
11
Optimal Path between two concentric circle arcs