Digging a tunnel between random locations

Romeo and Juliet are each placed uniformly at random locations on a spherical planet, meaning that each square meter of surface area of the planet is equally likely.

Romeo decides to dig a straight-line tunnel through the planet towards Juliet.

What is the most likely distance Romeo has to dig?

In other words, what is the mode of the probability distribution of straight-line distances?

Answer: The most likely distance is the diameter of the planet, when Romeo and Juliet are antipodal.

Assume WLOG Romeo is on the North Pole. Juliet's position is uniformly random on the sphere.

This is a surprising and non-obvious fact about spheres. It's not true for circles or for higher dimensions.

In other words, if you make a slice of an apple that's a fixed width, you always get the same amount of peel. Slices closer to the poles will have a smaller radius, but the peel will be tilted inwards letting more of it fit, and these two effects exactly compensate. 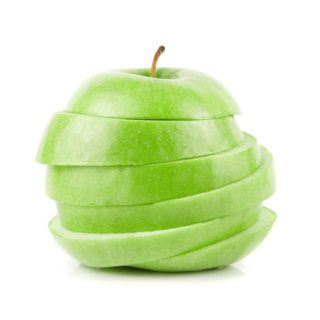 (In this picture, the slices are different widths, but I hope it gets the idea across.)

See the calculation from Mathworld for the surface area of a zone.

The surface area is computed to be $2 \pi r h$ (where $r$ is the sphere's radius), which is proportional to the thickness $h$ and independent the position of the slice given by $a$ and $b$.

So, Juliet's position can be randomly generated by picking a uniformly random $z$-coordinate. Therefore, the most likely distance is the one corresponding to the infinitesimal slice $\mathrm{d}z$ that compresses to the smallest range of distances $\left| \mathrm{d}D \right|$, maximizing the probability density. This problem is unchanged if we instead consider points on a two-dimensional circle.

Then, taking the derivative with respect to $z$ gives

and so the infinitesimal range of distances

This is minimized when $D$ is maximized. So, the most likely distance is the maximum one of the diameter, when Romeo and Juliet are antipodal.

We've also shown that the distribution of distance squared is uniform.

So the further away you get, the higher the population. The mode, therefore, must be $2$ - the maximum distance.

Intuitively, this must be because at the South pole, you can move a long way without changing your distance to the North pole much. I am very surprised to see a linear relationship drop out of that, though.

(Although I can't say I'm surprised to see someone has beaten me to it).

Edit: as noted by others, this answer is incorrect. It assumes (incorrectly) that the distance to the modal latitude is the modal distance.

Assume, wlog, that Romeo is at the north pole. Form latitudinal rings, composed of the land equidistant from Romeo. The equatorial one is largest. Therefore, we just need the straight line distance to the equator, which is $\frac{d}{\sqrt{2}}$

A short argument based on a beautiful equation giving the area of a spherical cap, runs as follows:

For a spherical planet, regardless its diameter, the surface area reachable by a tunnel with length not exceeding $x$ is $\pi x^2$. So the area reachable by tunnels ranging in length from $x$ to $x+dx$ is $2 \pi x dx$. The mode (most likely $x$ value) is reached at maximum $x$ equal to the diameter of the planet.

So although only one unique position is antipodal to Romeo's position, it does correspond to the most likely tunnel length.