Cutting from a cube (visualization test)

How many faces does this leftover shape have?

I feel the answer is seven, but my friends say five. This may be a relatively easy question for this site, but I found it quite hard to visualize.

You have two pieces one has 5 faces the other 7.

You and your friend are talking about different pieces. 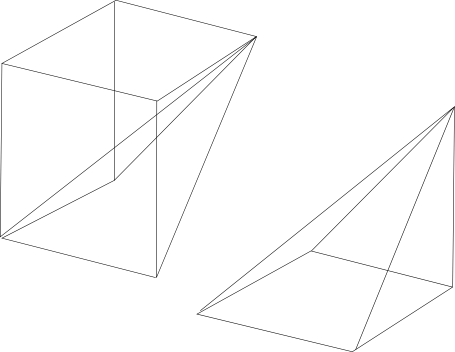 The piece on the left has a total of 7 faces (5 that were on the outside of the cube and 2 that are formed inside by cutting.)

The piece on the right has 5 faces (3 that were on the outside of the cube and 2 that are formed inside by cutting.)

The shape enclosed by the points is the one on the right (5 faces) the piece left over is on the left (7 faces.)

The shape that was cut out would be a square pyramid. Therefore it would have 5 faces: the 4 triangular faces formed when cutting it out of the cube as well as the square bottom face of the cube.

If you chose a point internal to the top face of the cube instead of one of the top vertices, you'd still get a square pyramid as the shape you cut out. However, then the leftover shape would have 9 faces. In that case the 4 sides of the cube would all stay intact as faces of the leftover shape, and you would have 4 faces corresponding to the 4 triangular faces of the pyramid.

I guess it depends what you mean by "connect this point to each of the 4 points at the bottom" if its by a straight line (regardless of matter) then your answer is:

5. If your base points are numbered 1 to 4, and your origin point >!is labeled A. Then you will have the bottom face (straight vertical line >!from A to the point immediatly below (1). You will also have two side faces going up vertically from the base as triangles as defined by lines from A to (2) and (3) which are the points next to (1). Finally the final two faces will be a diamond slanted from point A to (4 - across from 1), each half of the diamond resting on the 2 vertical triangles and the line from A to 4. 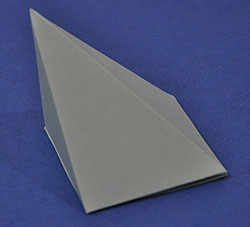 5. There are the 3 faces on the bottom and each vertical side next to the upper point. The new revealed surface is two faces with a ridge extending from the upper point to the lower diagonal point.

15
Touching matchsticks with compass and straightedge
19
Cube made of 2x2x1 blocks which blocks all light
10
Various cross-sections of platonic solids
7
One a puzzle, two a puzzle, Hot Cross Clocks
6
A construction on an infinite 2d grid, part 1
12
Ray reflection inside the cube
16
Cover a cube with four-legged walky-squares!
2
The Big Cube and Squares Puzzle
5
How can I cut a cube so that all its vertices except for two mutually opposite vertices are equally distanced from the plane of the cut?
0
How many L-shaped pieces will not be used to make cubes?