How can I cut a cube so that all its vertices except for two mutually opposite vertices are equally distanced from the plane of the cut?

A friend of mine has been struggling with a solid geometry problem and, knowing my imagination skills developed by playing gomokunarabe and renju, has asked me to help her, but the problem has proved to be too tough to crack for me either. The difficulty isn't about how to make calculations; it's that we can't imagine where a cut described in the problem could be. The problem seems to require a great deal of creativity and imagination and be a great dissection puzzle, and I humbly hope that SE users can help us.

Here is my English translation of the problem:

All vertices of a cube ABCDA₁B₁C₁D₁ except for two mutually opposite vertices A and C₁ are equally distanced from a certain plane. Find the distance from each of those six vertices to that plane. The length of an edge of the cube is 1.

It's the hint that made me puzzled, because I see only one single way to make a cut satisfying the formulation of the problem. My idea is simple: let's look at the cube from such a perspective that two mutually opposite edges entirely merge with each other, and let's cut the cube so that the plane of the cut is the red line in the image below: 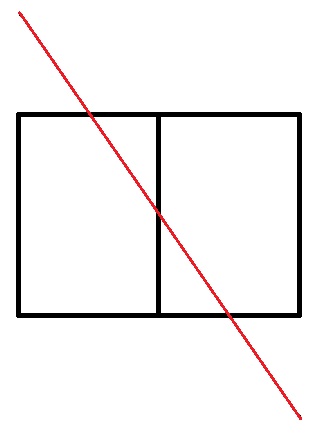 For that cut I easily made calculations and found the distance, but where does the second legitimate cut lie? I can't even imagine.

If I cut the cube parallel to one of its faces into two equal halves, then all eight vertices will be equally distanced from the plane of the cut, and this contradicts the requirement that a couple of mutually opposite vertices stand out in this regard.

Unable to see the second cut, I thought that the hint in the formulation of the problem might be erroneous, but my friend considers that to be a very remote possibility, knowing how scrupulous her teacher is.

Can you find the mysterious second cut or prove that it doesn't exist? 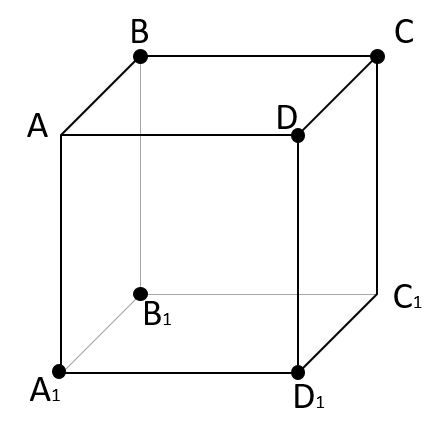 A 6-0 split is impossible (that is to say, they can't all be on the same side) because the 6 points are not coplanar, so if they are all on the same side, they cannot be the same distance from a plane.

Likewise, a 5-1 split is impossible because no 5 of them are coplanar.

Out of the vertices adjacent to A, at least two of them must be on the same side of the plane as each other, by the Pigeonhole Principle. WLOG, assume that $B$ and $D$ are in $S_1$. Now we can simply consider the possibilities for the last vertex of $S_1$:

- If it is $C$, then this yields the OP's "solution" of slicing the cube in half, parallel to a face (namely face $ABCD$), which might not be valid.

So we have exhausted all the possibilities.

6
Points on a cube
6
Cutting from a cube (visualization test)
12
Professor Halfbrain's second cutting theorem
3
The lost drone at the Great Wall of China
9
Half the pentagon!
7
One Morning at the Coffeehouse
12
Ray reflection inside the cube
4
An angle between diagonals
21
An ant's walk in the Cartesian Plane