I wanted to know how the best possible solution would change, if I were to add in special squares with different effects. I have some more ideas I would like to try if people like this kind of puzzle.

There is an empty 7x7 grid. You are allowed to paint some of its cells as walls (black), while the remaining cells are either empty(white) or hold a special piece. A robot is programmed to start on the Start(green) square and visit all of the goal(purple) squares using the shortest path possible. The game is over once the robot touches the last goal, it does not have to go back to start. The robot automatically knows the shortest path (including the effects of the special squares) and its decisions cannot be influenced. The robot moves from one empty cell to an adjacent empty cell (Horizontally or vertically, but not diagonally). The special squares are 2 x slide squares(red, with an arrow) and 2 x slowing squares(blue). Special squares cannot be placed on starting squares or goal squares. Can you paint the walls and add the special squares in a way that forces the robot to take the most number of steps? 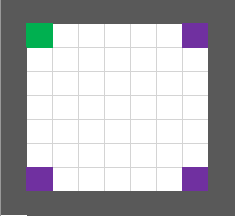 Slide Squares: The robot counts the slide as a part of moving onto the square. You may enter any direction except directly opposite of the arrow, and the spot directly opposite of the arrow must not be a wall. The robot will slide the direction the arrow is pointing. Once the slide has been used once, it disappears and you may go back across it in any direction. Here, it would take 3 moves to reach the goal, but 4 moves if it wanted to go from goal to start afterwards.

Slowing Squares: The robot counts this square as 2 moves. You may enter/exit from any direction and it has infinite uses. Here, It would take the robot 5 moves to reach the goal, and still 5 if it wanted to go from goal to start afterwards.

A different approach to the slides yields an improved solution: 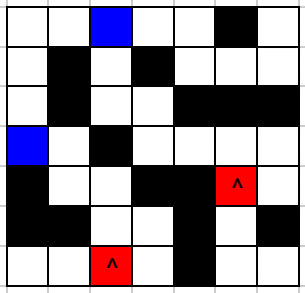 The optimal solution has the goal sequence of BL-TR-BR and requires a total of 54 steps.

My solution for the standard 7x7 is 46, though a greater number may be possible. 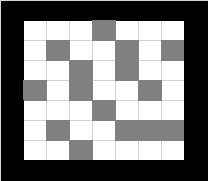 Adding in the special squares 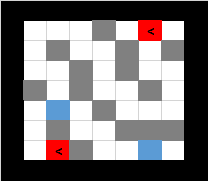 Thus, improvement should come from an additional use of a slow square (bringing both to 3, which I don't think is possible) or using the second slide square to force an additional step.

Not the answer you're looking for? Browse other questions tagged optimization or ask your own question.