Suppose you can make a rectangular maze, where each cell (apart from the bottom-right) can contain an arrow in one of the four directions (up, down, left or right) of your choosing, except for those on an edge or corner, which must not point out of the maze.

A ball is then placed into the top-left square and begins to move. It will move in the direction of the arrow in the cell that it is currently in. Then, that arrow will rotate 90 degrees clockwise. If an arrow is pointing out of the maze, it will continue rotating clockwise until it points in a valid direction.

A valid maze is one in which the ball will never reach the bottom-right corner.

Prove or disprove the existence of such a maze. If it exists, find the smallest possible maze (in terms of number of squares).

Here is an example of a maze. 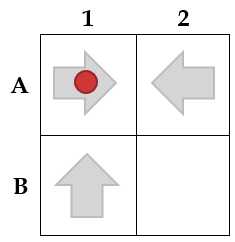 Suppose such a maze exists. Then the balls visits at least one square infinitely many times. Let $S$ be one such square that is closest to the bottom-right. $S$ is not the bottom-right square, so there exists a square $T$ to the right of or below $S$ that is closer to the bottom-right than $S$ is. However, the ball must visit $T$ at least once every $4$ visits to $S$ due to arrow rotation. Therefore, the ball must also visit $T$ infinitely many times, contradicting the minimality of $S$. Then no such maze exists.

Not the answer you're looking for? Browse other questions tagged logical-deduction strategy optimization or ask your own question.

7
Block the snake from reaching points
10
JonMark Perry's Grid Logic Puzzle
1
Guide the dots to land on the portals at the same time
3
Guide dots to land on any pair of matching portals at the same time
18
Playing with one Queen on a chessboard
2
Creating the hardest 7x7 maze with special pieces
0
Fill grid with Bs
2
Lasers : Introduction (Level 1)
4
Lasers: The Reflection (Level 2)
3
Lasers: Cross through the bridges (Level 3)