Network connection: Create a network that guides the signal from start to goal

This is a different 'connect the dots' puzzle.

Your task is to connect the blue nodes in the map below with links such that the created network guides a signal emitted from the red triangle to the green pentagram.
It is required that the signal visits each node exactly once.
(There is no restriction with respect to links. They may or may not be used by the signal.) 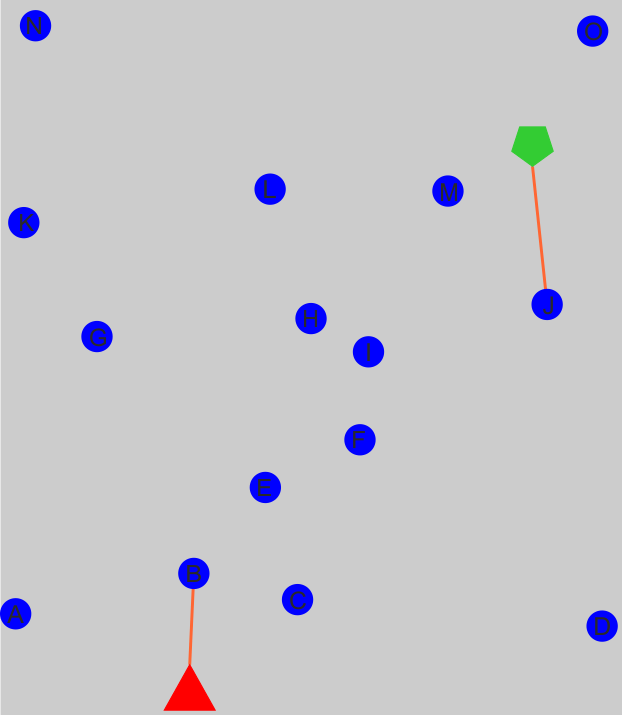 I do know that at least one solution exists, but I guess there might be more than one. In your answer, when possible, please give details on how you solved the puzzle or which general (useful) insights you've gained.

My Solution (by hand): 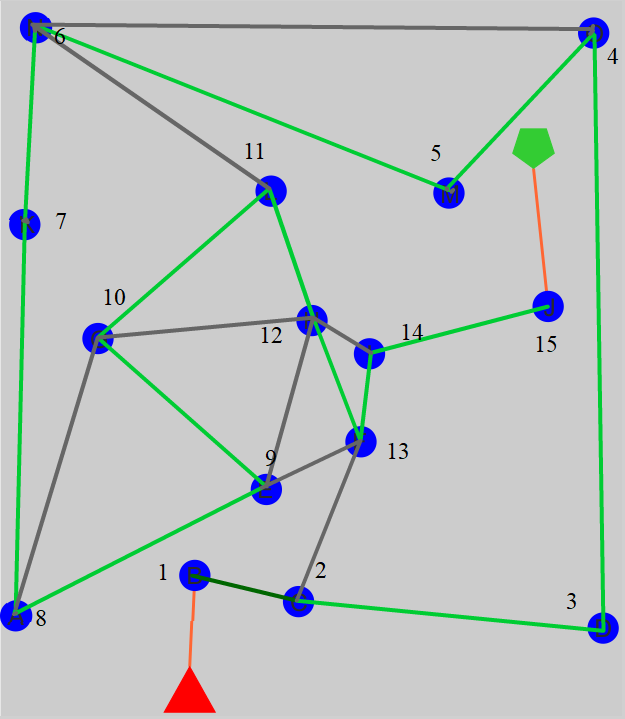 Insights by using a computer program

I wrote a computer program that can find all solution to this problem. However, it seems there are still challenges to solve here. Note, that there are lot's of valid solutions to the obove problem... I'm not going to post them here, because I want you to have a chance to find your own solution by hand without someone arguing "Haha! You just copied it from overthere...". Anyway, here are some more insights.

For finding the allowed interconnections, I went through all 2-node-combinations with ID(node1) < ID(node2). This ensured I get only undirectional links. To check if there are collisions with other nodes, I used a modified point to line distance formula. Other nodes must be more than the radius of a node (16 pixels) and half the line width (2 pixels) away from the line. However, I needed to modify the line formula to also compute the position of that nearest point on the line. As a line through nodes "H" and "M" gets very near to "O" if it is seen mathmatically as an infinite line. Hence, it needs to be checked if the collission is between the two nodes that are connected. Since this computation takes some time, it's beneficial to precompute all possible interconnections. The result is this image: 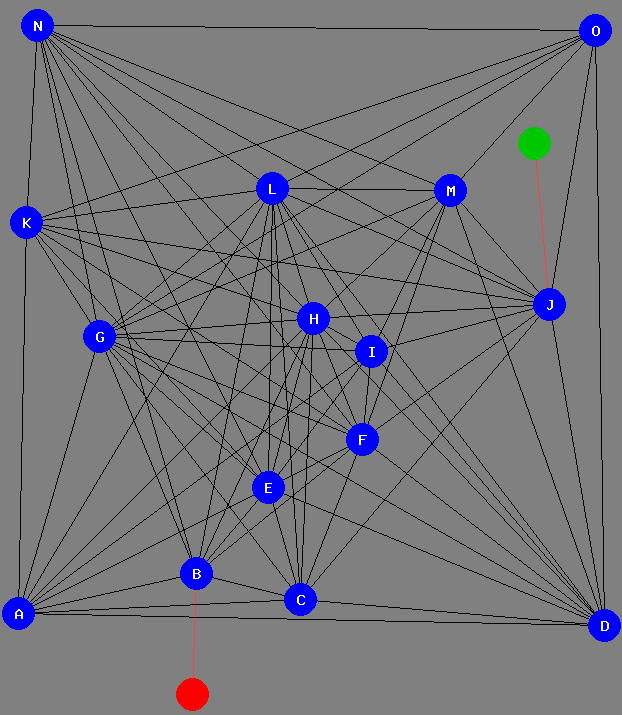 . Note that two of the connections are not usable, since they cross the connection from the Start to node B. Also note, that the Start and End can be approximated by circles too, as there are no connections that are going by too close to them to cause any trouble. For other node positions this might however by different!

The same was done for the crossings of connection. I used a formula for line intersections for this. I used one which calculates "u" and "t" as the position of the crossing on the lines. This time we need to check, if the crossing is on both of the connections tested. Also if using the "u" and "t" checking for >= 0 and <= 1 also finds a collission if the two connections share one point! So either check for >= 0.001 and <= 0.999 or test if any node is used by both connections in test. When now adding the initial connections manually and showing all possible interconnections left we get: 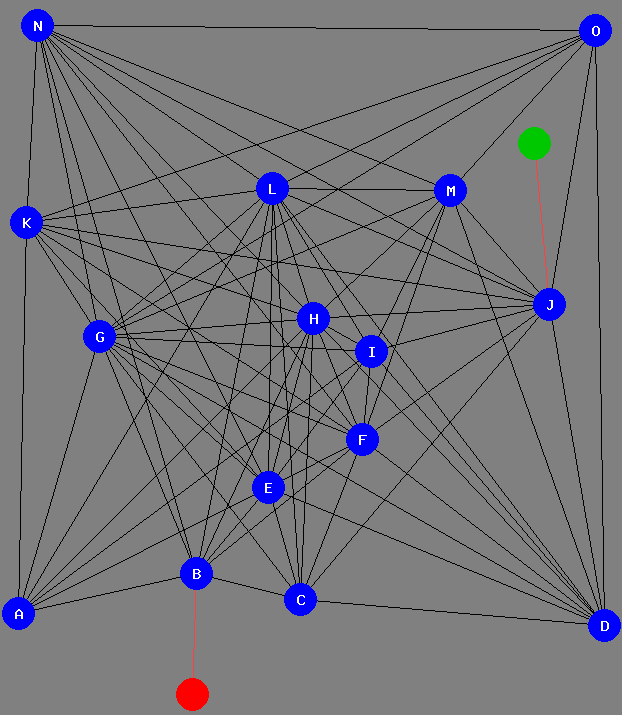 Intermediate solutions when ignoring the rules on how the signal follows the connections:

The next step was to just visit every node, before reaching node "J". This time ignoring the rules how the signal would travel, but not allowing crossing connections. I used a list of nodes that must still be visited and initialized it with all nodes from A to O and started the search at "B", which automatically removed "B" from the "toVisit" list. Then from there it recursively tried all possible combinations, which surprisingly didn't take too long (~3 minutes) even I just used a very inefficient programming language (PHP) in terms of speed. I chose it because producing images with it is very simple. It only found 45255 solutions, which was also surpring me. The original Traveling Salesman Problem problem would have taken ages and find millions or billions of solutions. But it seems that not being allowed to cross any connection, that was traveled before, speeds up the process extremely and at the same time reduces the number of solutions.

At first glance it seemed really challenging to implement this rule in a computer, since you would need to go through all connections that are used, calculate angles... in the right direction (always the direction pointing from the current node visited away), order them and then somehow estimate which is the first, second and so on. How could that be solved quickly? -- I already had the list of all possible interconnections. Hence, I could go through all nodes in advance and calculate the angle for each connection that leaves them. To calculate the angles the atan2(dy,dx) function is very helpful! Then all connections for each node are stored in a list, ordered by the angle. It doesn't matter which angle it starts. If we later want to estimate the path followed by the signal, we go through that list for the current node we are at and follow the order it is in! We create a new list storing any connections that are "used" so far, in the order we find them. Also we note down the list index of the connection we used to get to this current node as indexEntered, which will always be contained in this list... then as the list index starts by 0, we can simply calculate index = (indexEntered + signalStrength) % length(list) to get the exit node.

Now we not only need to add the links we want to follow, but also some links that ensure the signal goes the way we want it to go. As it was so quick to find the 45255 solutions for all the pathes without crossing connections, but ignoring the signal strength rule, I used a simple approach: At each node I tried trough all the permutations of still allowed connections originated from that node. To do that, I estimated the number $n$ of connections from the 'available' list that are related to the current node. Then I cycled through the $2^n$ possiblities, knowing that this quickly becomes a high number but hoping that using lots of connections would also cause most of that possibilities would very quickly die out in the near progress having to many connections in the way to reach other nodes. It worked, but it's very slow. So far it found 269 solutions having searched less than 1% of the problem space. Looking at those solutions showed a further insight: 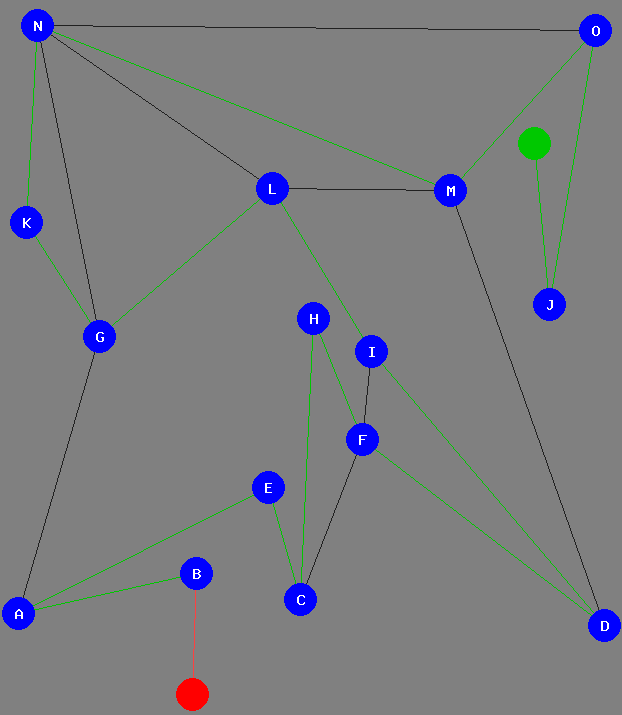 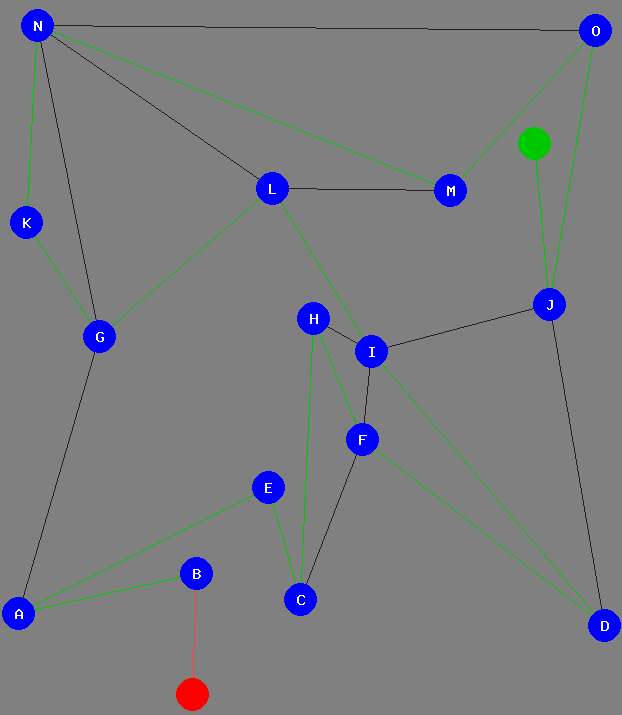 . Even if the path the signal takes stays the same, there can be multiple solutions!

As cycling though all that permuations seems to bee too slow, it might be much faster to find those 45255 solutions for just visiting all nodes (ignoring how the signal would flow) first and then add additional connections to make the signal flow as we want. This is one of the strategies I used to find my solution by hand. However, there is another strategy we could use to speed things up: the rule about the number of connections that need to be there to not make the signal flow backwards; I decided to find/store the 45255 intermediate solutions which took 34 minutes. That was 10 times slower than last time, most probably because I also generated the compressed *.png files. However, I can now cycle through those intermediate solutions and try to resolve them. Also I can do statistics on how many of them finally had real solutions and so on. 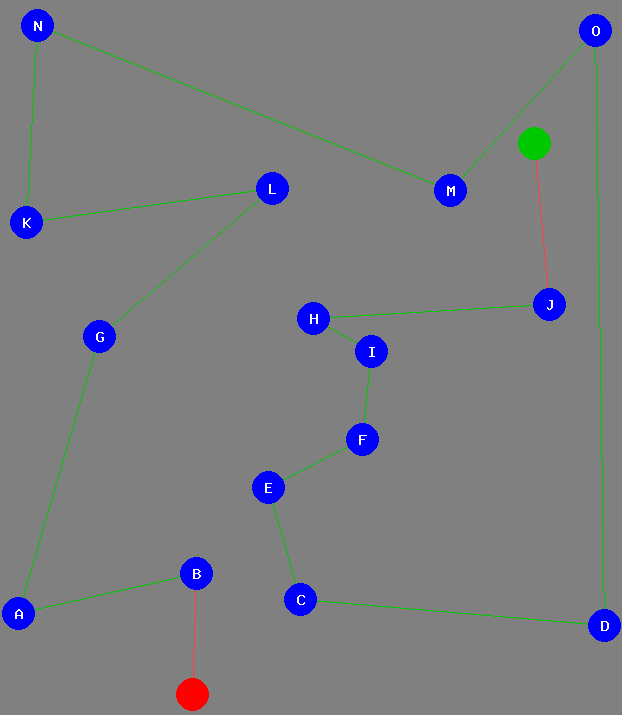 Note that I'm not supplying all solutions here, so you can solve the puzzle yourself and find any of the other over 34800 solutions that were not shown here so far!

For me it was just a lot of trial and error. The only real "strategy" I had was trying to stick to the outermost nodes as much as possible. Other than that, the fact that a signal with an odd-number strength lets you pass directly through a previously unvisited node helps. (All lines are links. Purple lines trace the actual path of the signal.) 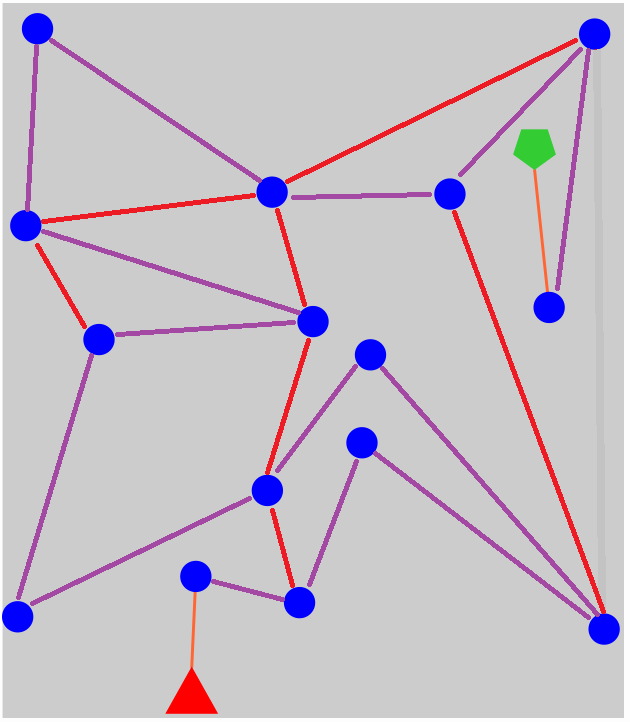 Not the answer you're looking for? Browse other questions tagged visual network or ask your own question.

21
Hidden in plain sight - By what method do these images hide a prime number?
6
Signal-network: Create a network that guides 2 signals
4
What is the largest, compact connected-network polyomino for these tiles?
7
Lights in the Dungeon: Five by Five
9
Lights in the Dungeon: Eighteen by Eleven
46
A-maze-ing Dice
8
Semiminibino...hologram
26
Transport Networks - An Introduction
4
Tokyo metro puzzle #5