Triangulating for the simplest puzzle that is still at least somewhat interesting to solve..

On the left side wall in this picture, we have two particular clocks:

1: an analog clock with identical hour and minute arms, and

2: a digital clock that shows initial zeroes when appropriate

During the course of a day, which of these clocks agrees more often with its horizontal mirror image? 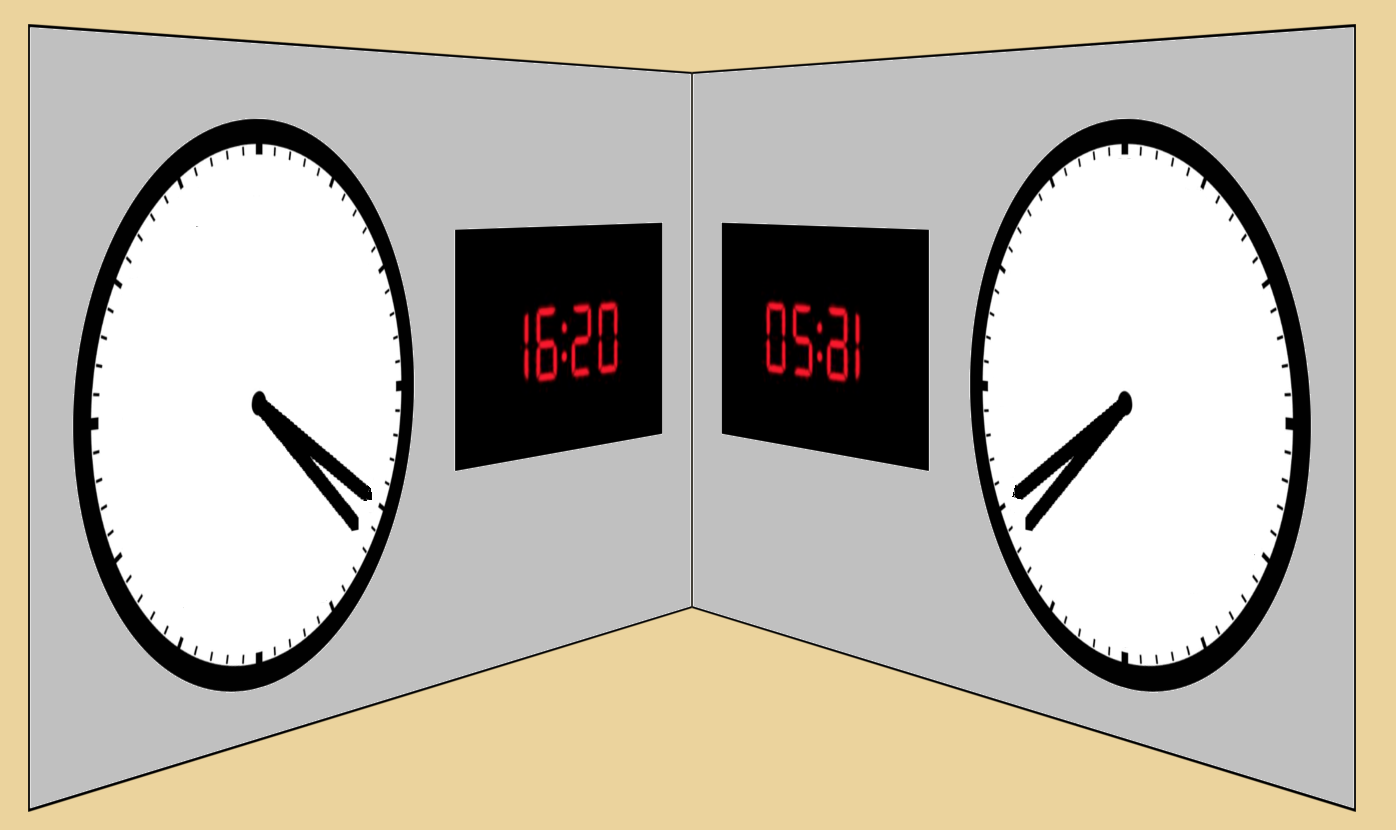 The times where the analog clock will match are

The same as the times that the analog clock has reflective symmetry across it's "y" axis. This will happen at least once an hour. The proof for this involves the Intermediate Value Theorem, but essentially boils down to the fact that, every hour, the hour hand continuously sweeps one part of the clock, while the minute hand continuously sweeps the entire clock. It follows that, in sweeping the entire clock, it must for an instant pass through the part of the clock that is currently opposite the hour hand.

It actually matches slightly more often than this, because they're already matching at noon/midnight, so it comes out to 13 matches every 12 hours, or 26 total.

The times where the digital clocks will match are

Again, where the clock has reflective symmetry across it's "y" axis (The colon). As @Dorrulf has already enumerated, this happens at 00:00, 02:50, 20:05, and 22:55. I'm not counting the times with ones in them, because they don't show up on the same half of the digit when reflected. This is a measly 4 total

So, it's clear that the reflections match more often for the

Assuming 'agrees with' is synonymous with 'looks the same'...

As suggested by Dorrulf and DqwertyC there are a minimum of 4 times when the digital clocks agree (if only (2|5), and (0|0) digits are considered to be mirror images, and a maximum of 11 times if (1|1) is also included.

For the digital clock we have:

So the result is:

To me, the question asks particularly about when the values of the clocks read the same value on either wall, rather than just being exactly visually identical. This matters primarily for digital in that as long as the reflection shows actual numbers, and the value of said numbers is equal to that of the left wall, I count it. Essentially, the padding of the 1 doesn't matter, thus 11:11 is acceptable.

Analog:
I believe the analog clock can be defined as:
f(y) = +-|x| for -3 <= x <= 3 where x is an integer.
The result is 13 points. Now, if you think that 12:30 should qualify and that the hour hand isn't off kilter enough to dissuade you, then you should also accept that the -0 and +0 y values in the function are different points, which would bump the results to 14. Given that this is only for a 12 hour period, we can double those numbers resulting in either 26 or 28 total values.

Digital:
I haven't figured out how to represent the dialog clock as a function like above, but the bounds are as follows:
The clock value must read the same forward and back (palindrome).
The right side is limited to values between 0 and 24 (military time).
The left side is limited to values between 0 and 60.
Basically, the right side is the only one that matters, and the left side's tens position restrictions fall to the right's ones position, and the left's ones position restrictions fall to the right's tens position.
Therefore, we have values where: z = x*10 + y
Where 0 <= z <= 24 and 0 <= x <= 2 and 0 <= y <= 5
As 3, 4, 6, 7, 9 are not reflective, and 8 is too large.
This boils down to 11 results.

As such, analog has more matches. (As @Phil1970 already noted)

Original below. Can ignore.

Not the answer you're looking for? Browse other questions tagged visual geometry time or ask your own question.

1
What are the exact times an analog clock with two identical hands and its vertically mirrored image show the same time?

50
Find the treasure before Dargloc does
7
One a puzzle, two a puzzle, Hot Cross Clocks
15
Twelve Labours - Prologue
16
The Odd Street Clocks
9
Four touching clocks
14
Idle Hands - A study on clocks
1
What are the exact times an analog clock with two identical hands and its vertically mirrored image show the same time?