The clockmaker took a walk after a lunch from a restaurant and across the block corner he found the old clock box with four similar looking clocks on every wall. It is in the middle of the street intersection mounted on top of a tall wooden pole. "Can you restore and synchronize them?" ask an old man sitting on a bench around the pole. "You see, only the pendulum clock is running. The last that stopped yesterday afternoon is the tilted clock. All these clocks usually works properly on their own ways" he explains while giving a rewinder key and a ladder to him. As the clockmaker inspect and explore the 4 clocks, 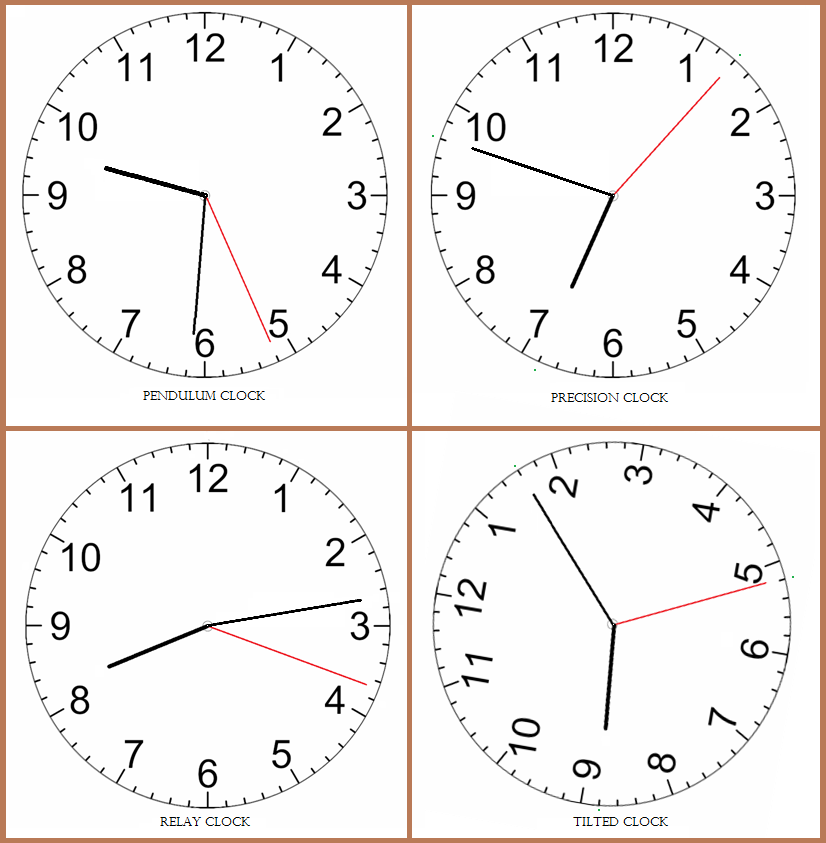 The note above the pendulum clock reads: "The seconds , the minute and the hour hand reverse their rotational direction when they strike the 12 mark. At midnight all hands are moving clockwise". The clockmaker forgot his cellphone to tell time but If he can tell the real time from this clock, he can make this the reference for starting the other clocks.

The note above the relay clock reads: "At 12 o'clock all hands runs with proper clockwise speed. When two hands coincide they switch rotational speed". For the clockmaker it is easier to tell the time on the clock when he figure out the pattern.

The note above the tilted clock reads: "All the hands are always at the proper angles. The clock face has a tilted design and the hand dials were shuffled". For the clockmaker this is shambles. He can't tell which hand runs in seconds,minute or hour speed. And the face plate of the clock is a bit loose indicating it had been rotated somehow. He must turn it to proper position.

The clockmaker can starts a clock when he rewinds it. He finished the job in an hour or so. How did he restored and synchronized the four clocks?

Browse other questions tagged time or ask your own question.

8
Odd hours with two timers
19
A weird and spooky clock
7
One a puzzle, two a puzzle, Hot Cross Clocks
4
The time is approximately 10:10
15
“Musical chair” for clock hands
4
Switching the clock
11
Mirrored clocks
16
You cannot have 120 degrees of separation, but how close can you get?
4
A Second Hand Question