An entry for Fortnightly Topic Challenge #40, have fun with non-Chess puzzle! ;)

Three young children: Red, Green, and Blue; were playing a classic game of Snakes and Ladders, when suddenly their mom called them to have a dinner.

When they came back to their room, they forgot whose turn it was; even they were not sure either about the order of the play!

This was the last condition of the board, including the die. Could you tell them whose turn it is and the order of the play? 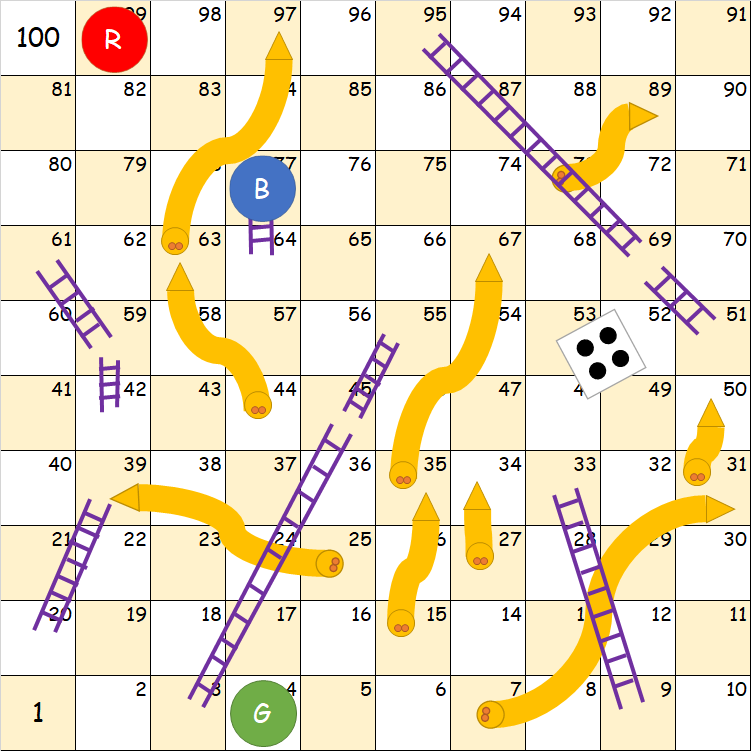 Some notes and clarifications:

The other guys already got the answer. (Maybe not with completely airtight arguments, but nevertheless.) The explanations would be a lot easier to follow if they had pictures, so here's one: 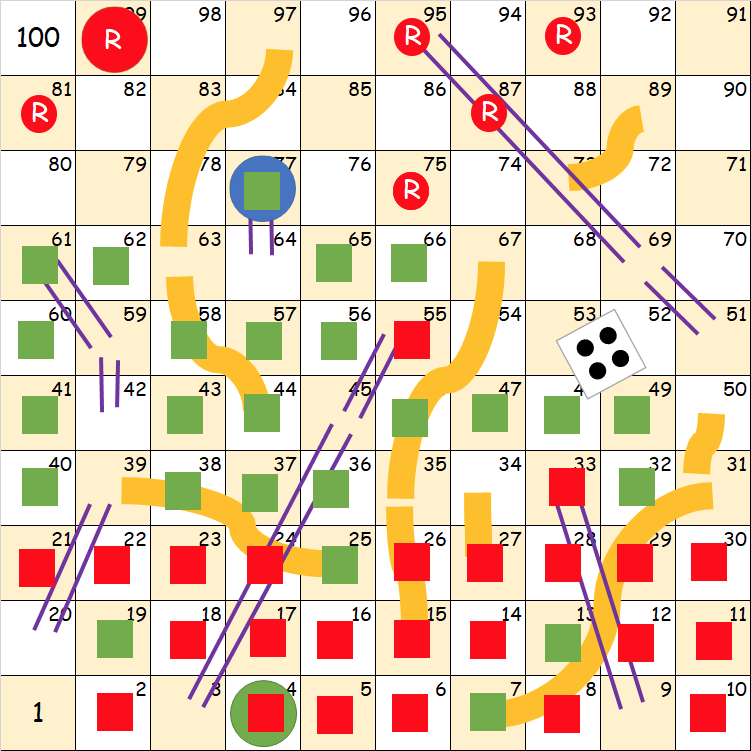 From there, the solution is pretty simple:

So the only remaining things to check are that

So finally, the answer is

It's Green's turn, and after that it's time for the fourth round, with Red playing next.

Blue was the child who just rolled the 4, you know this because Green is only 3 spots from the beginning and if Red had rolled a 4 he would've started the last turn from an impossible position on top a chute
Because of Green's position he must have only taken 1 or 2 moves from the beginning of the game. Both Red and Blue's position is impossible to reach in 1 turn, as even with the roll again on 6 rule, they get trapped in an infinite loop with the slide from 31 to 7.
There are 9 effectively different starting positions for turn 2, a unique one for if their last roll landed them on one of the escape ladders or their last die roll. It is impossible to reach Red's current position or Blue's known starting position from any of these 9 starting positions, meaning that Red has already taken 3 turns, Blue has just taken his 3rd turn and Green must go next.

Assuming the order of players to roll the dice is R B G,
the next player after they come back from dinner will be

Not the answer you're looking for? Browse other questions tagged board-games retrograde-analysis or ask your own question.

32
Mate in one with NO PIECES?

6
make a green profit in roulette
15
Scrabble Impossibilities
10
Who Wins At Horsie-Push?
6
A Blokus Flow problem
6
Customers are weird these days
7
Escape the cube 2 (Theseus and Minotaur variant)
26
The master programmer and the mystical reversal
13
Stepladder Game, Introduction and Puzzle 1: Turning
11
Murder in the Royal Court
28
How did four chessmen disappear?