Same goes for the aliens op top. Every alien on the top of the image goes through the four mutation chambers below it. The one above A goes through A, D, G and J. The alien below chamber J is the result.

Every chamber applies exactly one mutation (make a head square, ...).

These mutations can occur:

Each of these mutations can occur as many times as you want. It is not said that every mutation described above will occur for sure. This means that multiple chambers can remove leggs and that adding arms is done nowhere (e.g.). 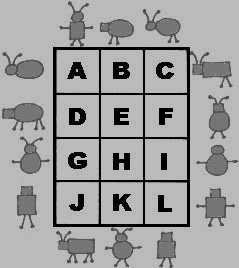 Can you tell me which room provides which mutation? If you can tell me, tell me in spoiler tags!

Source: Raadselweb.net (translated from Dutch to English by me)

As I haven't been the first to present a solution, I thought I might at least provide a detailed deduction route here. ( I did not look at the solution first. )

To solve this puzzle, I first make a reduction of information, moving form the (nice!) pictures to pure information. I use the following abbreviations:

By simply comparing left & right as well as top & bottom one gets:

The next step is to count which mutations actually appear, giving us:

Note that twice means that the same mutation appears twice in either the rows or twice in the columns.
Summing those mutations, we get 12, which is good, as we have 12 cells to fill.

Start with the modifications which appear once in total, and also appear once in either the rows or columns. Their cross-section has to be the mutation cell:

Now we look at the obvious double-counted mutations:

+S +U appear each twice but we see already that for the first row only a single cell is left over for +S. For the second row a net +U can only be achieved if there is only a positive and no negative mutation in that row. This immediately gives:

Next we can expand the logic:

In the third column 4 mutations have to happen but only one cell isn't yet assigned. It has to be +S. But now the last row needs to be neutral in S, which we can only achieve by a -S in the same row. This has to be in the 2nd column, because the net mutation for columns is +S in the first and -S in the second column, respectively. This gives us:

We can use the same arguments again for the upright (U) property:

In the third row there has to be +U and -U, and there is only one possibility to fit this:

And now there is only one possibility to fill in the rest for the final solution:

I noticed that my answer is different from BmyGuest; maybe there are multiple solutions?


Actually, I think that D must be -H (remove arms/hands)

I was much less methodical.

I found A, B, and C by process of elimination. Then I listed all the possiblities for E, F, H, I, K, and L. Then I was able to find E and I, followed by the rest through guessing and checking.

9
The Beverage Button
12
Checkers with the devil
4
The devils number
18
Jump to the 13th dimension
43
The Persistence Of Memory
17
The Collapse of Memory
9
Smart Students in a Murder Madhouse
19
Diabolical Deceptions: A 333rd Birthday Tribute to J.S. Bach
12
Masyu puzzles with many circles
0
The Primordial Ones