The horrible wordsearch: Can you decypher the word-search puzzle to find the final clue?

This will be a tricky one, I think. The whole puzzle is self-contained in the information between the two horizontal bars below.

The answer to this riddle is a book title of 5 words. The book is rather well known literature and can be legally obtained for free as e-book.

The word search-puzzle comes with a few important clues (see below), but there is no additional information to this puzzle outside the two horizontal bars.

Can you find the 5-word-title ?

The whole puzzle and the book title are in English. Although there are several "stages" to this puzzle, you will need to look at the puzzle as a whole, i.e. the additional clues may not be disregarded. (Or you will not solve this puzzle.)

Words are born as letters, but they reach adulthood when they are six. (And this puzzle is not child's play!)

You find us from East to West and West to East, from North to South and South to North. And in between, can we also be seen. We do not jump, we do not bend, a straight line we form, from start to end.

We meet at Waterloo station.

I have part of the puzzle:

(The following text is taken from xnor's answer as he finished the solution. This answer is marked as accepted as the majority of the grunt-work was done by Warlord --Joe)

From there, I simply

This led me to

The first paragraph of The Hounds of Baskerville, a story featuring Sherlock Holmes, which contains these words.

As confirmation as to the answer

the first chapter contains references to meeting at Waterloo Station.

I feel like I disregarded some information in my solution, so I'm curious if this is how it was intended to be solved.

The Hound of the Baskervilles

Warlord 099's answer took me almost the whole way there. It suggests to:

fill in partial words like B***KF*** into words like BREAKFAST, then find them in the grid with a set of substitutions. For example, it becomes BDSOKFOEC, a string found backwards in the top row of the words search, with the substitutions D<->R, S<->E, O<->A. C<->T. Presumably, Warlord 099 found these by looking for snippets in the word search and finding consistent substitutions.

From there, I simply

This led me to

The first paragraph of The Hounds of Baskerville, a story featuring Sherlock Holmes, which contains these words.

As confirmation as to the answer

the first chapter contains references to meeting at Waterloo Station.

I feel like I disregarded some information in my solution, so I'm curious if this is how it was intended to be solved.

This is the solution as intended. The puzzle has been properly solved in a somewhat joint attempt between Warlord 099, Xnor and Aioros. I feel I should post this solution here for completeness sake:

The first two hints are auxiliary to narrow down the word search. They were edited in after I realized that the possibilities of the word-search might have been too many, if "anything allowed" has to be assumed.

Simply a hint to disregard words with less than 6 letters in this puzzle. This is valid for both the word-search and then the book-search

Another clarification hint to narrow down the puzzle a bit. Indicates that the word-search is a standard 8-direction-straight-line-no-steps search in the grid.

The next hint is a critical one for the book-search. I think it is a real key-hint.

Who is we? Well, what meets at a station? Trains. The word is needed further down. Waterloo is a smaller hint towards the geographic area but it is not really needed. Central Station would have been as good, but I wanted it a bit more themed. (Aioros figured that hint out. Well done.)

This really was a crypto-word-search, so the additional clues needed where:

6 letter pairs are switched in this puzzle! Find those 6 pairs, and you've nearly solved it.

Those where the 10 words actually hidden in the word-search. I thought it would be pretty obvious, but it turned out, that many thought in a different direction. The * indicate letters which where of the switched pairs while the "fixed" letters are given.

...that one could still find the pattern in the word-search, which would then give 10 words with mangled letters (sometimes more than one alternative, but never too many), and one could then solve this like a simple replacement cypher. i.e. the last word could only fit in two places of the puzzle and could only have been one of the following according to the word search: VYEYCAD or VDCESLS.

It is potentially easiest to first highlight the letters which are not changed, i.e. BHKFUGQMPV. 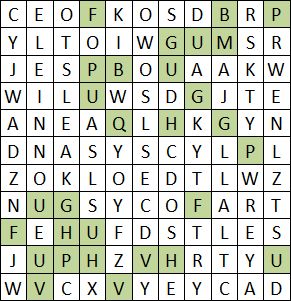 If you match the pattern, of the given words, there are really only very few places they would fit. Some letters appear very rarely, and the space is limited. For example, there is only one place where the pattern B*H of the first word fits. 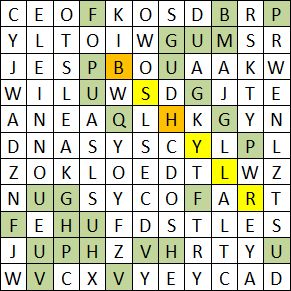 If you follow this through, you'll find all words:

You now have to solve the replacement-cypher with a bit of 'feeling' for English words. This gives you all 6 letter-pairs as discovered by Warlord 099. (Although he seems to have started out with the word breakfast regardless of the word-search!).

If you'd sort in alphabetic increasing order, this would give:

But now you need the word found from the important clue, giving you:

Which brings you to the final part of the puzzle:

C.Doyle is a rather known author and 'father' of Sherlock Holmes. The words found in the word-search appear an odd choice? Well, those are the first 10 words (of more than 5 letters) of one of the Sherlock books.

Mr. Sherlock Holmes, who was usually very late in the mornings, save upon those not infrequent occasions when he was up all night, was seated at the breakfast table. I stood upon the hearth-rug and picked up the stick which our visitor had left behind him the night before.

The title of that book: The Hound of the Baskervilles

In the spirit of this site, I would like to invite others to comment (in this answer) how they like the puzzle; how deductive they think it is; if they could solve it, and if so because of what clues; what could be improved etc. etc.

Not the answer you're looking for? Browse other questions tagged cipher word-search or ask your own question.