In this decrypted cipher, what is meant by "GABL" and how should I make sense of the whole message?

In "The Blue Scarab" in Dr. Thorndyke's Case-Book by R. Austin Freeman, Thorndyke finds the dead body of Uncle Reuben in a meadow based on hieroglyphic letters inscribed on a blue scarab ornament and using compass bearings. The translated letters read:

How should I interpret these words, and what do the numbers refer to?

While points concerning the plot of a story tend to be the domain of Literature.SE, our business on Puzzling.SE is puzzles - and this is a question about a puzzle. Namely: I think I have decrypted a cipher (albeit a particular one from a specific short story) - how can I make sense of its output? Here's an explanation for the OP, along with some general suggestions that can be applied in future similar scenarios...

As introduced by the OP, in this particular short story (The Blue Scarab by the British writer R. Austin Freeman) while investigating the theft of a deed-box from a Mr. Blowgrave, the detective Dr. Thorndyke ends up solving a deeper mystery involving the historical unexplained disappearance of his client's great-great-uncle Reuben and the whereabouts of some stolen jewels.

When all of the contents of the deed-box are safely returned except for a blue glass scarab whose back is decorated in ornate hieroglyphics, Thorndyke attributes the item great importance, retrieves the original hieroglyphics from their imprint in a wax seal that remains in Blowgrave's possession, and realises them for a cipher that needs to be interpreted. The hieroglyphics yield English letters: 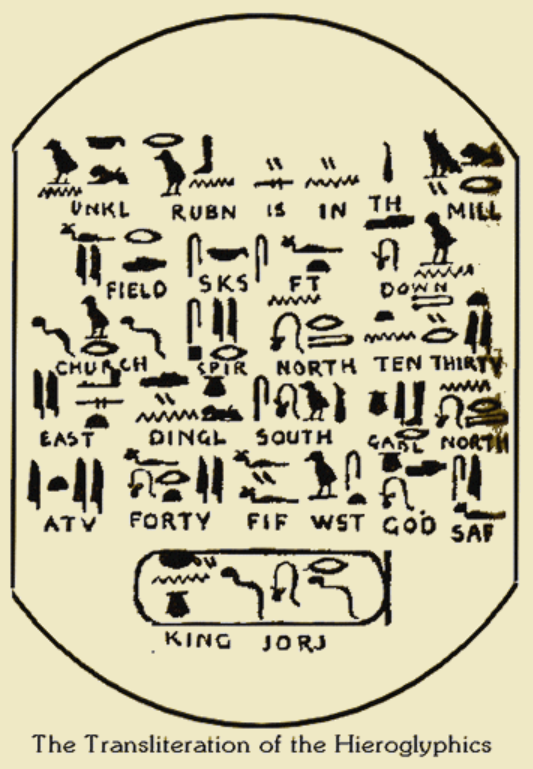 Frustratingly (for somebody wishing to know more about the significance of this message) it is never fully translated into proper English or even referred to explicitly in the remainder of the story. Instead, Thorndyke acts on this information and makes only oblique references to it. It's a classic case of letting-the-reader-do-the-rest-of-the-work - we've cracked the code itself (the hieroglyphics) but now we need to interpret what we have before us. Sometimes this is as much of a skill as actually cracking the code in the first place, and it's a tool that any puzzler trying to break a cipher needs to have in their toolbox.

So what are we as readers expected to do with this message, and how should I act when coming across similar partially-decoded messages in future?

Tip 1: Are we nearly there yet?

The first thing to ask after decoding a cipher or code is to ask whether we've actually finished decoding it - does our message make sense or are we supposed to perform any further steps on it?

Sometimes the output of a cipher is further encoded and yet more decryption is required. In this case, however, (as noted by the OP) many of the words outputted in the case of the Blue Scarab are recognisably English words - IS, IN, MILL, FIELD, DOWN, CHURCH, NORTH, TEN, THIRTY, EAST, SOUTH, FORTY, WEST, GOD, and KING; the others are not (not yet, that is). Given this, it seems that we are almost there - we likely don't need to do more decrypting, we just need to work out how to parse this 'plaintext' into readable English...

Out of context, we can make guesses at the significance of the remaining non-English words (UNKL, RUBN, TH, SKS, FT, SPIR, DINGL, GABL, ATY, FIF, SAF, and JORJ), but knowing a little more about the story, we can identify all of these with a few simple observations:

Note that, in fact, Point 1 (above) is the precise way the detective in the story breaks in to the meaning of the plaintext:

"Now it happens that I have just enough elementary knowledge of the hieroglyphic characters to enable me to spell them out when they are used alphabetically; and as soon as I saw the seal, I could see that these hieroglyphics formed English words. My attention was first attracted by the second group of signs, which spelled the word 'Reuben,' and then I saw that the first group spelled 'Uncle.' Of course, the instant I heard Miss Nellie speak of the connection between the scarab and Uncle Reuben, the murder was out..."

To make it comprehensible, we need to add some punctuation! There are some immediate obvious clauses that can be separated out from the rest to enable us to split it into three parts:

What are we to make of this middle section? Again returning to the context of the story, the decoded message is rumoured to identify the position of Uncle Reuben's grave. Clause (a) here immediately backs this up - he is buried in the Mill Field, a location that has previously been mentioned in the narrative as "a large meadow, at one end of which stood a dilapidated windmill..." Clause (b), therefore, is some kind of instruction as to how to pinpoint the grave precisely!

This could potentially lend itself to two different interpretations, somewhat along the lines of:

Since after solving the code, Thorndyke takes compass bearings (and since the first 'treasure map style' interpretation above would actually require only one of the two instructions to be provided in order to end up at the intended spot, rendering the other surplus to requirements) the second of these is most likely the intended parsing (or something thereabouts). In other words, by using the two given points, a map and a compass, the precise location of Uncle Reuben's grave could be identified through a process of triangulation.

To quote from the story again:

We moved on to the clump of young trees, where Thorndyke took from the research-case a tall, folding camera-tripod and a large prismatic compass with an aluminium dial. With the latter he [made] one or two trial bearings and then, setting up the tripod, fixed the compass on it. For some minutes Miss Blowgrave and I watched him as he shifted the tripod from spot to spot, peering through the sight-vane of the compass and glancing occasionally at the map. At length he turned to us and said: "We are in luck. None of these trees interferes with our bearings." He took from the research-case a surveyor's arrow, and sticking it in the ground under the tripod, added: "That is the spot. But we may have to dig a good way round it, for a compass is only a rough instrument."

To answer the OP's initial questions specifically: from context, ATY and GABL should be interpreted as 'eighty' and 'gable'; the numbers in the plaintext are compass bearings that enable the precise location of Uncle Reuben's grave to be pinpointed almost exactly.

The quoted text and image are taken from Project Gutenberg Australia.