Tic-Tac-Toe Without a Predefined Board

On a warm and uneventful summer day, John and Mary passed the time by playing games of Tic-Tac-Toe, taking sticks and drawing in the soil. John and Mary are both child prodigies, so within two rounds they solved the game and got bored. To decrease their boredom, Mary proposed a new and exciting variant of Tic-Tac-Toe.

In normal games of Tic-Tac-Toe, a 3x3 grid is drawn pre-game, and is then filled with the Xs and Os. In Mary's variant, the grid is only hypothetical, and it's position is not yet known. It is up to the players to assert it's exact location in making their moves.

Mary is an extremely confusing child, and she often scares her parents with how strange she is, so naturally we must walk through a sample game to understand what is going on in her head. 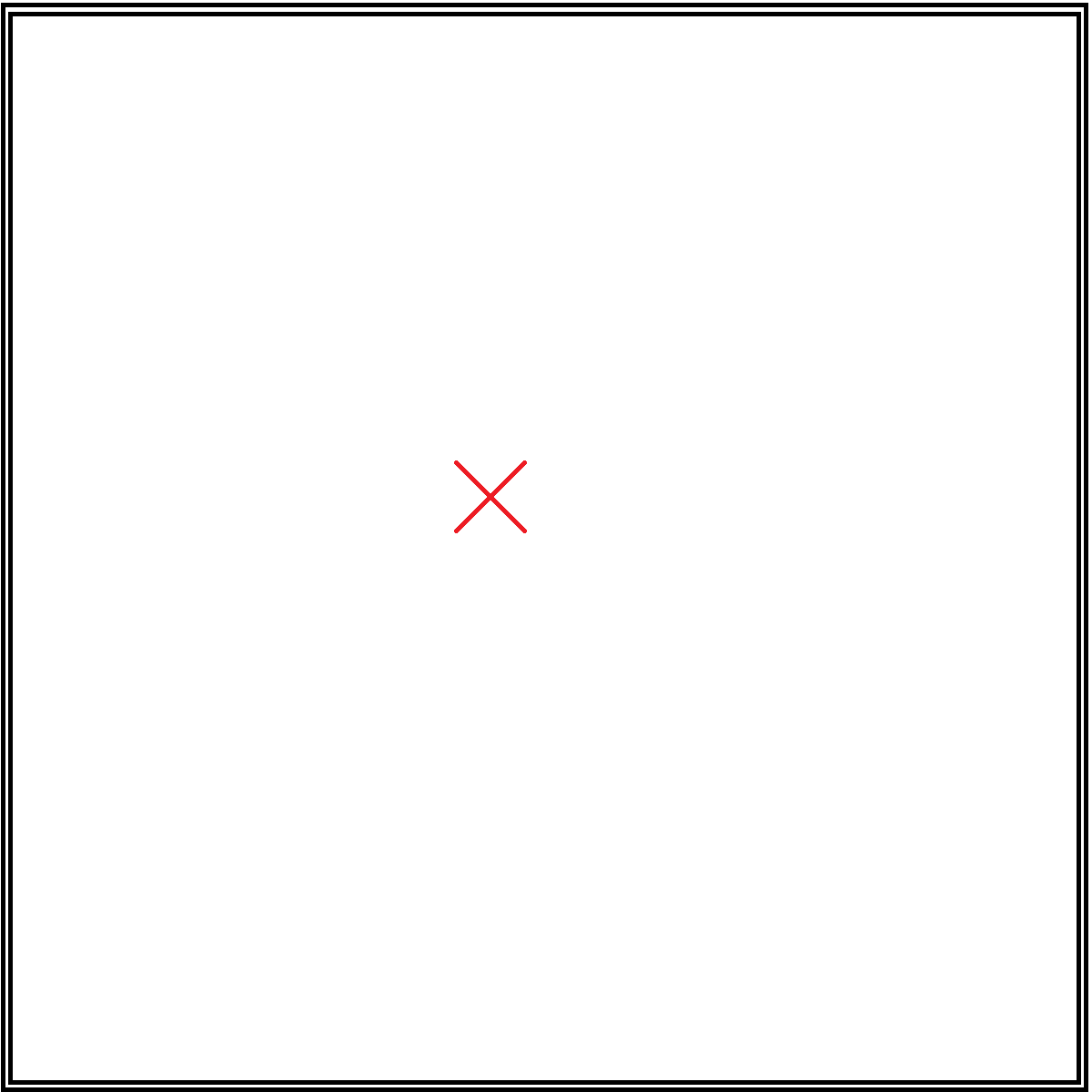 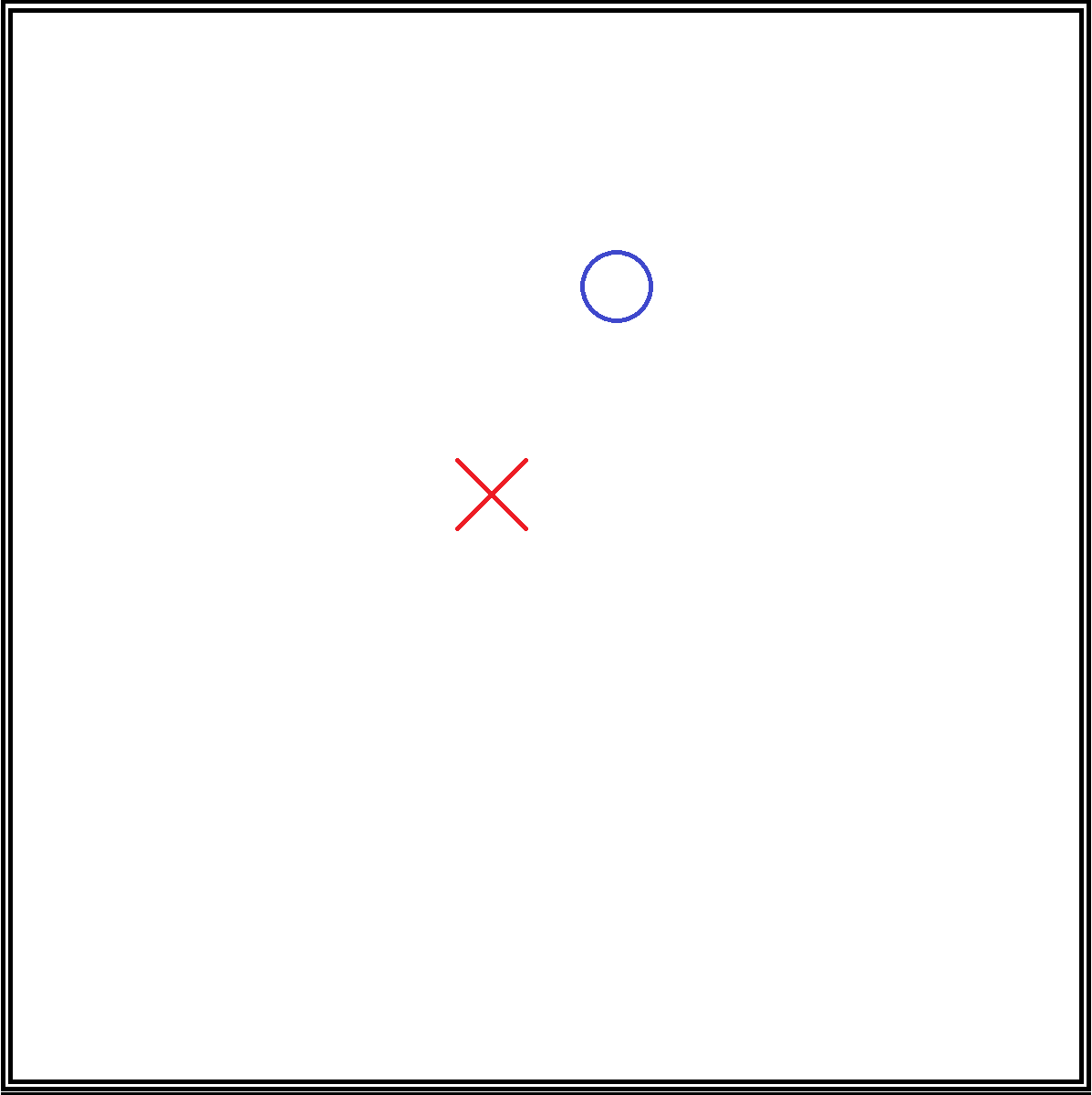 The second move. An observant one would note that these first two moves do not actually change the course of the game. 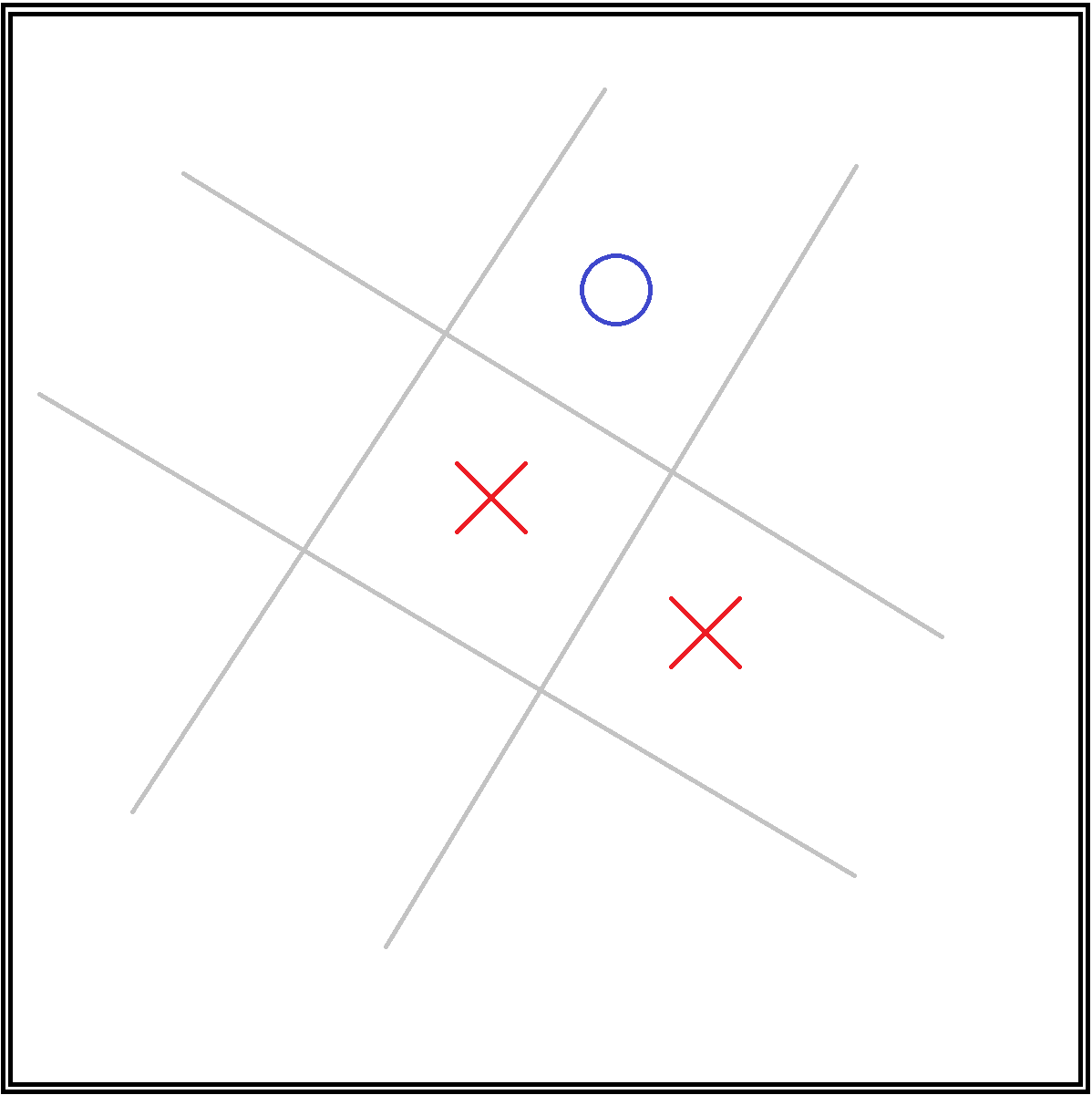 Player One asserts a possible location of the 3x3 board based on the given moves, and follows up on his hypothesis with his third move. 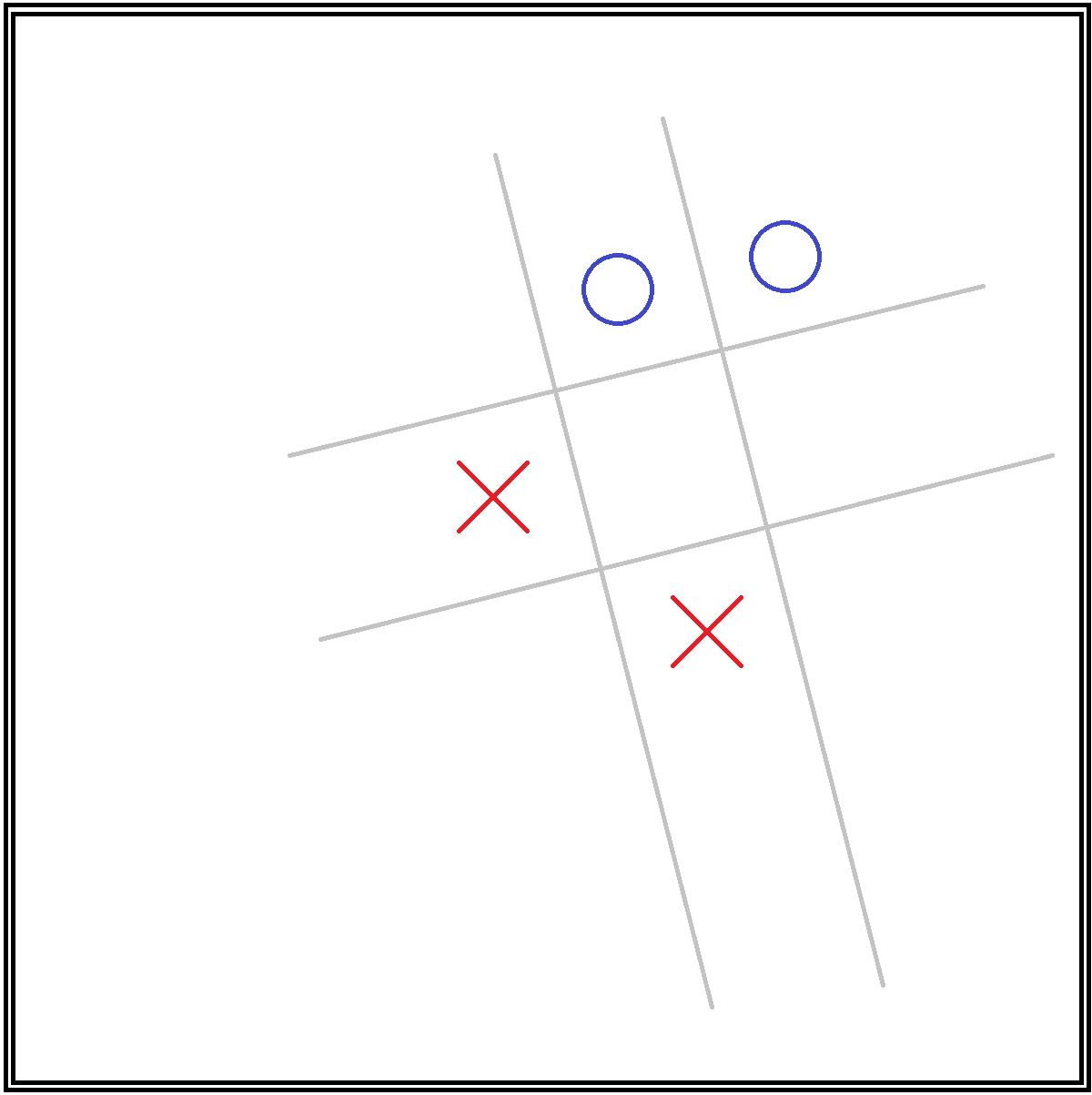 Player Two retorts, proclaiming a different possible position of the board, and follows up with the fourth move. With this move, the board is now uniquely defined with the given information. Play can now continue normally. 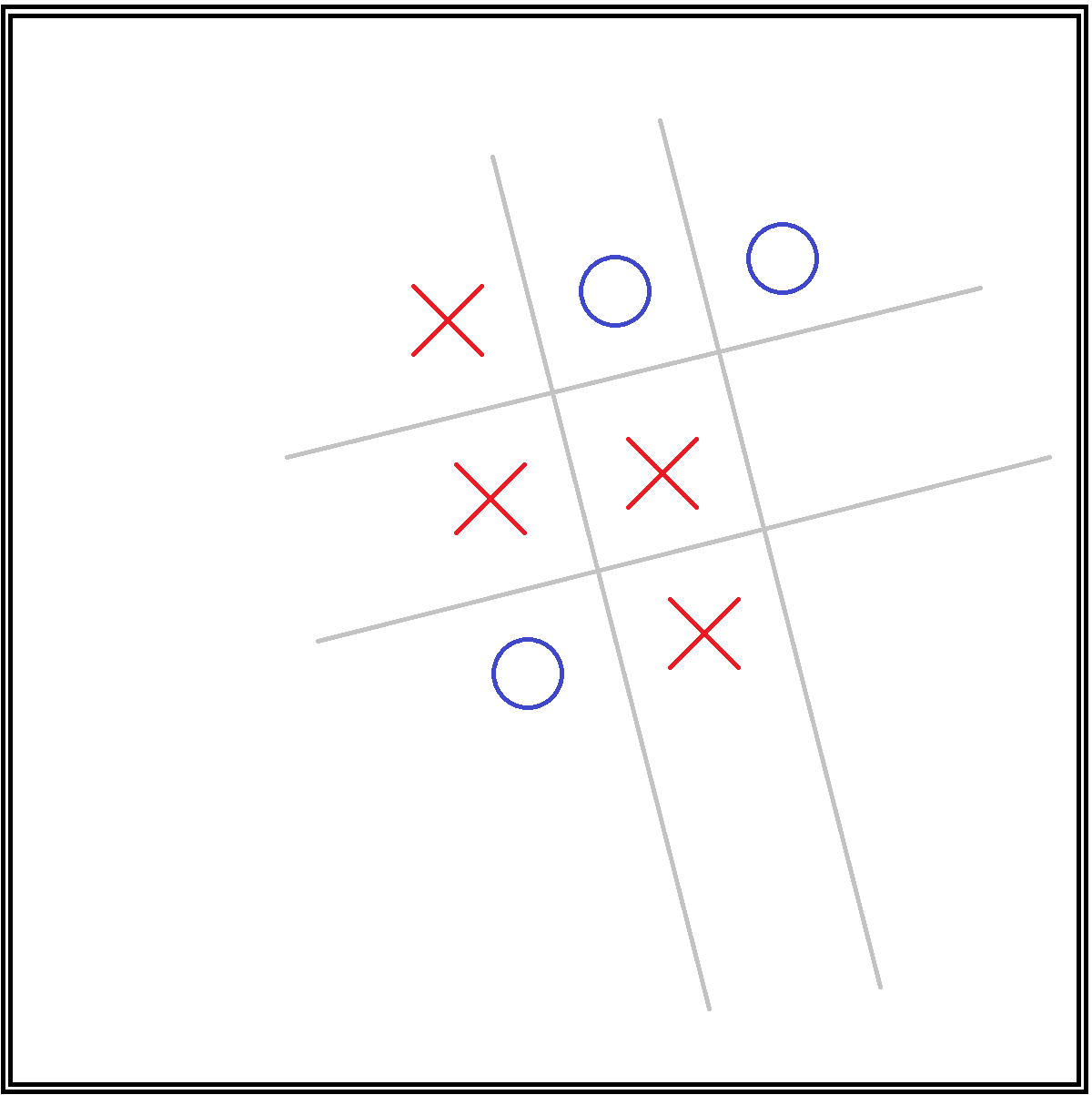 A sequence of forced moves shows that Player Two's defiance completely backfires, facing a double threat, and she loses the game.

In Mary's Tic-Tac-Toe variation, what will be the outcome with optimal play? Does Player One have a forced win?

We're now locked on this plane, albeit not uniquely (the O can be in the central or rightmost column). Either way, O is forced:

And now X can uniquely define the board and force a double threat, and thus a win:

Yes, as long as I didn't interpret you wrong, I believe that player 1 has a forced win: 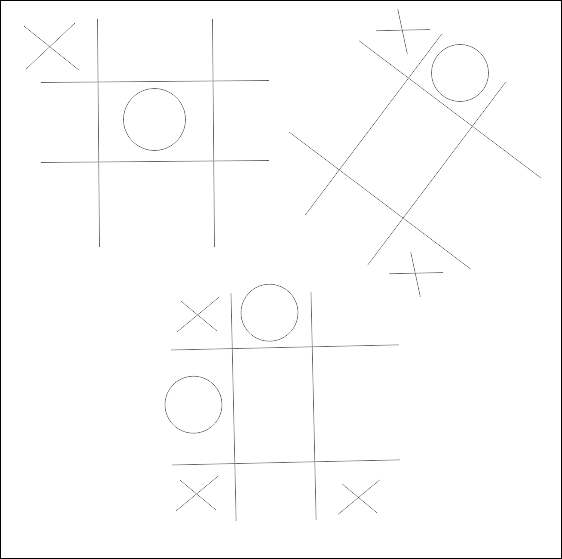 If The second player plays expecting the first player to go to the corners (The best strategy for winning) then the player should be trying for the center, if not they will loose as long as the other player dosn't make a mistake.

On the top left Tic-Tac-Toe game the second player plays as if the 1st player played in the corner and plays in the center according to the way he or she sees it. This however is inefective because the third play can define the boundaries of the game.

In the top right Tic-Tac-Toe game the 1st player can look at the 2nd player's move as dirrectly beside theirs and play to the corner farthest from their own. (This will make player 1 win.)