You are playing the classic game of 3x3 Tic-Tac-Toe. You are blindfolded and you cannot see the grid, while your opponent can see it. When making a move you call out a cell. If that cell is taken you are told that it is taken and you can call out another cell until you find an empty one. You make the first move. How can you guarantee to get a draw or better?

You can't do this going second:

The opponent starts by going in the middle. You must pick any cell around the outside. Then the opponent can pick any cell except the one opposite yours; and you now have to guess which of the three other lines through the center they were trying to create.

The strategy going first is:

Turn 1: Play in the middle.
O then makes another move.

Turn 2: Play on an edge.
O makes another move.

Turn 3: Try to play on the edge opposite your current one. If you do that, you win! Otherwise, O has played there, and the board looks like this:

So, you can try the bottom left corner; if that's taken, you go in the bottom right. Either way, you safely block O's only possible line!

This means after turn 3, the board will look something like this. O will now place their third piece. 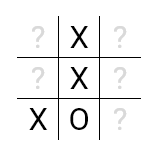 O only has one more line they can possibly make -- the right column. And they can't have just made it, because they've taken 3 turns total, and one of those was to block you.

Now it's easy to finish the game off - you just put a piece wherever it fits in the line on the right. This blocks O's last possible way to win, and you've successfully at least drawn the game!

it's not possible to force a draw blindfolded. If you ever place two pieces in a line and the third space is empty, O can just avoid that space - you'll have to play last and go there. So, going in the center won't work.

O starts by playing a knight's move away from you.

Now you only have a few possible safe spaces left: the other knight's move away, or if you started on an edge, one of the two adjacent edges. O responds...

...and now the game is forced to have a winner: if you don't block O, O wins. If you do, there is a cell that will force you to win, and O can just play anywhere but that cell.

41
What is the optimal first move in tic-tac-toe?
13
Devising a sudoku where the rows are the moves for a draw in tic tac toe
2
Another Tic-Tac-Toe problem
37
Titanic Tic-Tac-Toe
8
Tic Tac Toe Recursive
14
Tic-Tac-Toe Without a Predefined Board
19
A Tic-Tac-Toe type game
5
Can you tie in 3D Tic-Tac-Toe?