How many states can you determine in this game of minesweeper?

In this game of minesweeper, what is the number of unclicked squares whose state you are guaranteed to be able to determine without losing?

A square can have one of two states: Mine or Not Mine 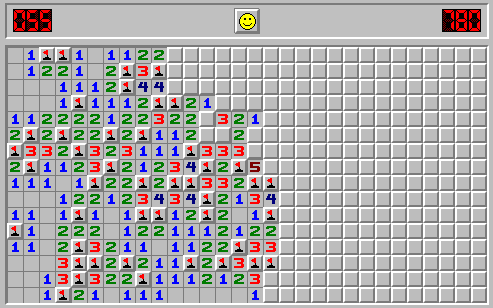 Edit: I stress that I am looking for a number, and hence your answer should be a single number, with explanation.

Edit: I am not interested in what the state of each square is, just if you will be able to determine it.

I can get this much: 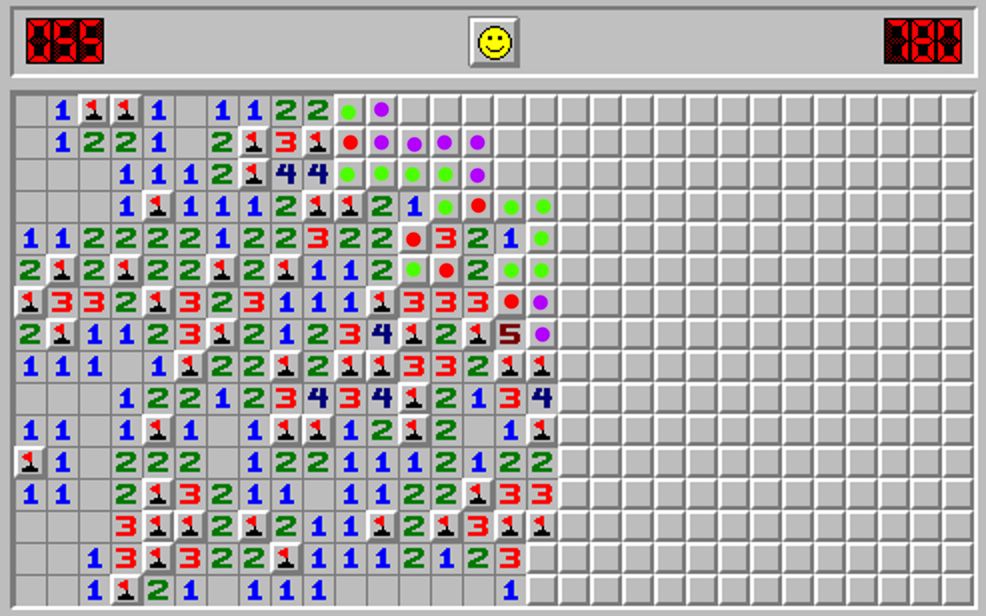 which is to say,

Here's how it goes.

The green and red cells are, respectively, mine-free and mined. We begin by counting cells near the 3 in the 321 configuration to the northeast: exactly one to S+SW, at most one to W+N, hence one to NE (and exactly one to W+N, which gives us a bunch of mine-free cells around the 1). I think the inferences that give us the other red and green cells are straightforward.

the purple cells are ones whose states we can definitely determine, though I can't tell you what the answer will be. For instance,look at the one "in the corner" at the top. We get that because the green cell to its southwest has only one neighbour; therefore, when we look at it (safe because it's green) we will discover that neighbour's state. Continuing with this sort of reasoning gives us the other purple cells at the top, and the upper of the two purples next to the 5 at the right. The other one next to the 5 is because we know how many mines are around the 5 and there's only one cell left.

there will be some other cells we can expand -- e.g., one of those two next to the 5 must be un-mined -- but how many new cells this tells us the state of is not determinable so far as I can tell, and I think the number could be zero.

[EDITED to add:] Here's a sketch of how to prove that

after these we need not be able to determine any further cell-states.

Note that I am writing this after reading other people's solutions :-) but I haven't read them in much depth and am not deliberately copying anything.

So, first of all,

it's obvious that we can't, or at least mightn't be able to, do anything in the lower half. E.g., right at the bottom we need one mine but it could go in either of the two available cells; provided the two lower purple cells haven't given us anything extra (which clearly they needn't) the six cells above could be (top to bottom) any of X--X-X, -X--X-, or --X--X, which between them allow each of those cells to be in either state.

What about the top region? Well,

if all the upper purple cells turn out to contain mines (which they could) then we plainly learn nothing "beyond" them at the very top.

So the only question is

whether then the five known-clear cells next to the 1 near the top right have to tell us anything about the seven unknown-and-not-purple cells next to them. The answer is no. Let's suppose the upper of the two lower purple cells is mined and the lower unmined. Now, reading clockwise from the cell two above that 1, if we have X-X-X-- then those five cells say 3313; if we have -XXX--X then they say the same; and likewise if we have -X-X--X; and between them these possibilities put each of those cells into both possible states.

indeed it is possible that no other cell's state can be determined after finding those 25.

I've found a bunch of squares which CAN'T be determined using the given information: 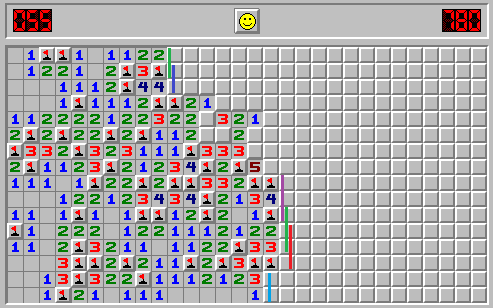 The cells in the bottom two rows, linked by a blue line, must be one mine and one yours, from both the 1 and the 3. We can't say any more than that.

Now each of Hellion's and Laurel's answers determines the state of the same 17 cells, and Gareth's shows that we can determine the state of a full 25 cells. Those 25 cover pretty much all but the ones I've marked here, which I've shown to be indeterminate. So the optimal answer should be 25.

I know what 17 of the unmarked squares are.

Red squares are mines and blacks aren't in this picture: 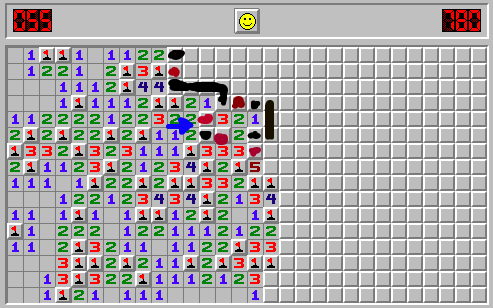 The blue arrow points to two squares, the two on the left below:

The three and the two to its right share 3 ?s, which must contain 2 mines. The rest of the mines near the two, but not the three must not be mines. The two below this first two is only adjacent to two unmarked squares, which must be mines.

At this point it's just basic minesweeper. 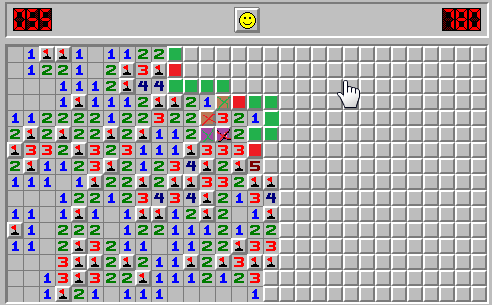 ! Starting with the 2 purple squares, those are one mine and one not-mine. Then the three other squares around the three must be 2-and-1; but two of those are part of the 1-and-4 around the one, so the two brown squares are 1-and-1, leaving the red square to be a mine.
Then the rest of the squares around the one to the lower right are definitely not-mines, which leaves two squares next to the two (the rightmost purple one and the bottommost marked red one) as mines; which means the other purple is a not-mine, so the lower brown one is a mine and the upper brown is a not-mine; the brown mine completes the column of three twos, so finally the three marked squares in the top three rows can be determined.

Not the answer you're looking for? Browse other questions tagged logical-deduction minesweeper or ask your own question.