How can you cut a doughnut into 12 pieces with only 3 straight cuts? [duplicate]

Hi guys I have been trying this for ages and can't work it out. Is it actually possible? P.S you can't move the doughnut/cut pieces.

cut the doughnut on a diagonal sideways. That is, think about a horizontal cut through the doughnut, and tilt it diagonally. This should give you two pieces, half circles with overlapping ends – the more overlapped, the better.

line up a cut vertically, from the top of the doughnut straight down, but diagonally (as viewed from above). It should go from the right side of the front "X" to the left side of the back "X". This should cut every piece you already have into two pieces – cutting a corner each off of, say, the right side of all the front-and-right three, and the left corner each off the back-and-left three.

My crude drawing, to help with confusion 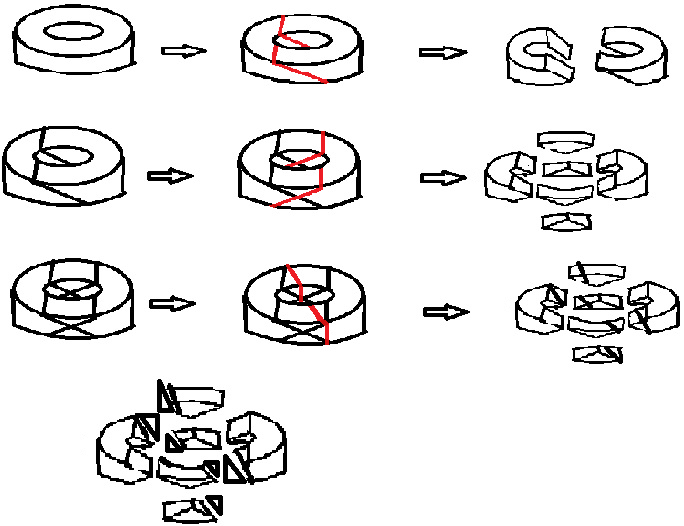 12
Slicing a donut 3 ways - what's the most number of pieces?

35
Cut the disk with a hole in four equal pieces
6
A puzzle for my family
5
Can't figure this one out.. What is the missing box?
12
Cut this shape into 3 pieces and fit them together to form a square
5
How can I cut a cube so that all its vertices except for two mutually opposite vertices are equally distanced from the plane of the cut?
8
Making 7 congruent triangles from the pieces of a triangle dissection
7
Can you distribute the balls equally into 2 boxes?
11
How long can you survive at the devil's playground?