This is the third question of the series: The Gnosis questions

"Link a phrase which means being depressed,
A phrase which means propitious future,
Something utilizing the phenomenon which results when film is exposed for a long time,
And the scientific process by which liquids(or gases) turn to solids.
"
Who am I?

Edit: It was not grasses, but gases. Apologies...

1. He is or rather 'was' a famous personality in his field of work.
2. All these four lines fetch one(or two) word each, and are his famous work.

I think I've got it this time.

the only thing i can think of here is Light Painting, a technique which uses long exposure photography, and of course picasso was a painter

My guess is that you are

Under the weather: rain is a type of weather

A phrase which means propitious future

Pennies from heaven: something raining down

This one I'm a little iffy on. When film is overexposed, the picture is "washed out", and the rain can cause a washout at a game or outdoor event.

Precipitation, which rain is a form of.

being depressed - feeling blue
propitious future - ?
Something utilizing the phenomenon which results when film is exposed for a long time - burn scientific process by which liquids(or gases) turn to solids - freezing

I think this because...

You said on kamenf's answer that "being depressed - feeling blue" is right. Mr Freeze is blue as seen from here: 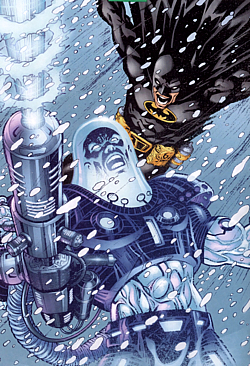 Not too sure about other parts, however:

You said my other answer to "And the scientific process by which liquids(or gases) turn to solids" was almost there. Perhaps you meant freezing? Not to mention Mr Freeze is a scientist.

Perhaps the phrase you mention is...

"In this universe, there's only one absolute... everything freezes!" This is Mr Freeze's quote. Although there are other quotes that suit other keywords, they don't contain the freeze keyword. It's always worth giving a shot I guess.

I do not have the complete answer but here's what I've worked out so far:

"Link a phrase which means being depressed,"

A golden future or a bright future?

expsosing a film to light uses a phenomenon which is called: Photoelectric.

well if you freez liquids or gases they become solid, so lowering the temperature. the scientific names for it are Deposition and Solidification.

At first i thought it was:

Carl sagan, because of his statement A Pale blue dot, (but the only thing matching there is blue, you might say (for the birght future, everything falls pale by comparison) but still that would only give me 3 words (Pale blue dot) where i have 4 sentences which might even give me more than 1 word each.

It might be albert einstein, when you think about photoelectric you might not directly think about him but this was a part of his work.

So no real answers yet, but maybe this helps others. I'll surely update this when I figure out more.

I am figuring out parts of it.