Bar trivia is heating up

Last week I popped into my local bar, Staggers, on Tuesday night with my work colleagues to have a few well drinks and jalapeño poppers, and kick some tail at bar trivia. Somewhat to my surprise, the bartender Sam had put up a huge, Jeopardy! style board for the evening, which looked like: 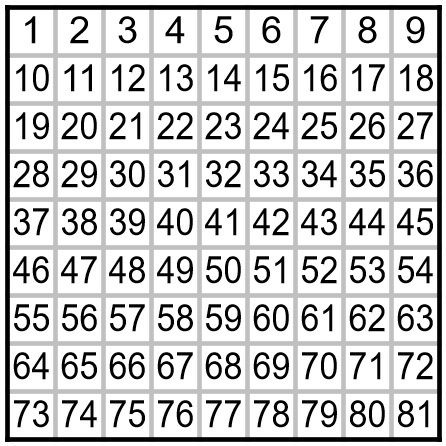 "Looks like somebody has been doing good business on trivia night," I said to Sam. Sam replied, "Yep, thought we'd do it up right, and have a place for folks to keep track of their answers."

After a few minutes, Sam started calling the questions, and my team slapped! But after question #64, Sam called "Alright, that's it for questions." I shouted, "But there are 81 squares?!?" Sam broke into a small smile, and said "Oh, you should be able to fill in the rest. We're not done."

What did Sam mean? If there were no more questions, what was left to do? And what about the extra questions? Oh, I guess I should give you the question list:

It is unfortunate that table markup doesn't work inside spoiler blocks.

Here are the answers to the quiz questions:

(I've said that Big Bend "seems wrong" because the question claims it runs along 1/4 of the Tex-Mex border, which it doesn't. OP has confirmed that this was an error and by the time you're reading this the question may have been amended.)

you will notice that many of the answers are, or contain, numbers in the range 1-81. I have put those in the column immediately before the answers themselves. There are two blocks, one immediately after the other, that are almost 180-degree rotations of one another when drawn on the 9x9 grid. (The answers in these blocks are either numbers or things like "turn", "right", "continuing", "bend" that evidently kinda describe the path we're taking; the latter occur in the same positions in the two blocks, though the specific words don't correspond closely.) I have labelled them A and B in the first column; the last two entries in each of these blocks I have given lowercase letters a,b instead because they are in the wrong order to preserve the symmetry. I don't think the symmetry has any particular importance other than its prettiness.

Before these we have some non-numerical clues; the 13 is actually one of these. The starts of the answers in the first block say THER/MO SU/DO/KU THER/MOM/ET/ER CLUES. After that come the aforementioned numerical-and-"turn" answers. Then NUM/ER/IC/AL CLUES, and a bunch more numerical answers.

So we are evidently meant to construct and solve a Thermometer Sudoku puzzle. (Maybe some variant thereof, depending on what it is I've failed to get out of "Thurston / Angus MacLise". Maybe it's just Thurston / MacLise -> THER/MAL or something.) But how are we supposed to interpret the clues? There are several kinda-plausible guesses as to how to interpret the thermometer clues, but all of them quickly encounter fatal objections other than this one: by default a thermometer is a single straight line, specified by its endpoints; "curve" etc. signifies a continuation. And the numerical clues seem clear enough: there are 1s in positions 6 and 76, 2s in positions 28 and 63, 3s in positions 7 and 54, etc.

So we now have the following: 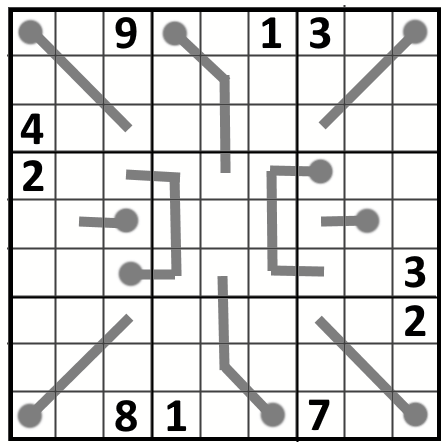 OK, let's work this thing out.

The C-shaped thermometer on the left must have a 1 in its bulb. (If that's not a 1, it has to be at least a 4 because of 2 in the same 3x3 and 3 in the same row, and then the other end is at least 8, but it has 8 and 9 in its column.) The diagonal thermometer in the NW corner has at least a 5 in its bulb (1-4 all being excluded on row or column) so at least a 7 at the far end -- but the far end has 8 and 9 in the same column so must be exactly 7, and we can fill in that whole thermometer. This means that that C-shaped thermometer has a 5 or 6 at its tip, which working backwards lets us put a 2 in the cell next to its bulb.

At this point we have 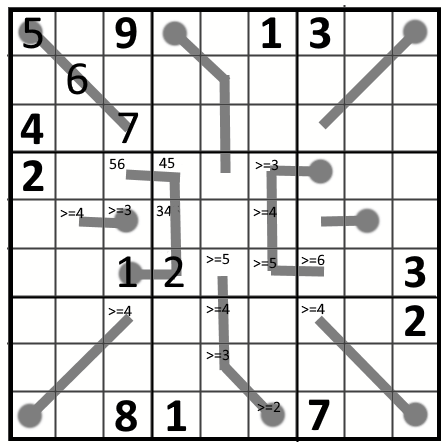 The state of play is now 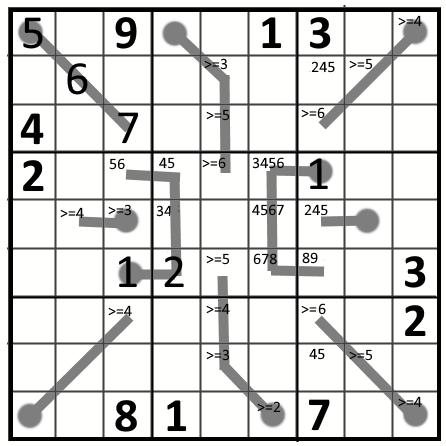 note that the bottom-right thermometer can't be 456 because there's a 45 cell elsewhere in its 3x3. So the top-right one is 456, which lets us fill the centre-left cell of that 3x3 with a 2. So we have 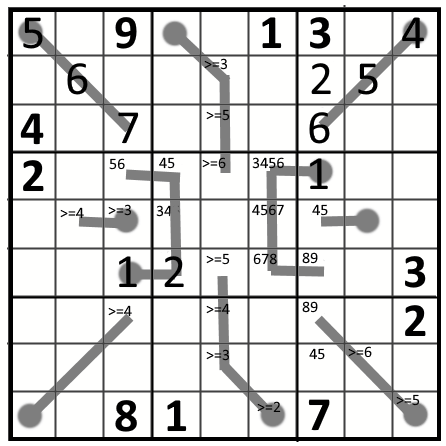 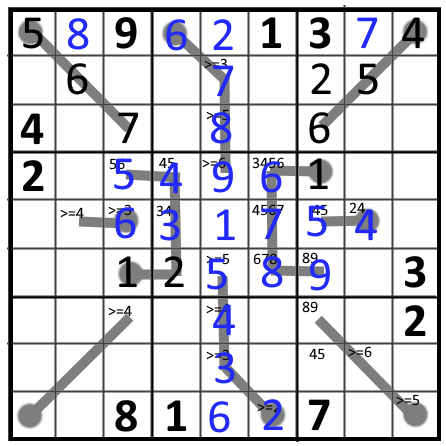 The bottom-right thermometer has 8 not 9 at its tip. Its previous cell is 6 (7 being unavailable). Its bulb is therefore exactly 5. Now the bottom-left cell is 349; it can't be 9 because it's a bulb; it can't be 4 because there's a 4 in its column; so it's 3. The cell near bottom right labelled "45" has to be a 5 since we already have a 5 in the column; so the rightmost cell of the bottom row is 9, and the other blank cell in that row is 4. The remaining cells of the bottom-right 3x3 are 1,3, and must have the 3 at the top and the 1 at the right. The top-right 3x3 has three blank cells, one of which must contain a 1; it can't be either of the right-hand two so it's the bottom-centre one. The other two cells of that 3x3 are 8,9, so the other two currently-unfilled cells in the rightmost column are 6,7; we must put the 7 above and the 6 below. Oh, and at the top right it must be 8 above 9. Now we have -- still all conditionally -- 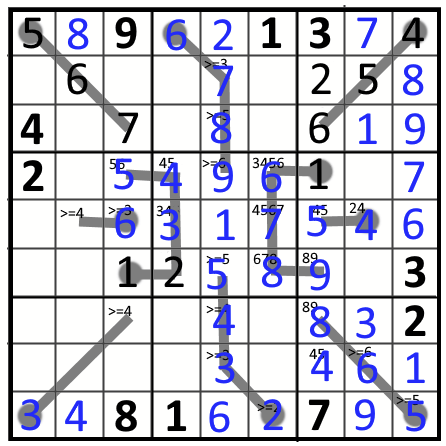 The centre-right 3x3 is missing 2,8 ... and finally we have the contradiction I was expecting to find earlier, because the lower of its two empty cells can't contain either of those. OK, so, finally, that hypothesis turned out not to work; the bulb of the short centre-right thermometer doesn't contain a 4, it contains a 2. (I expect there was an easier way to see that.) 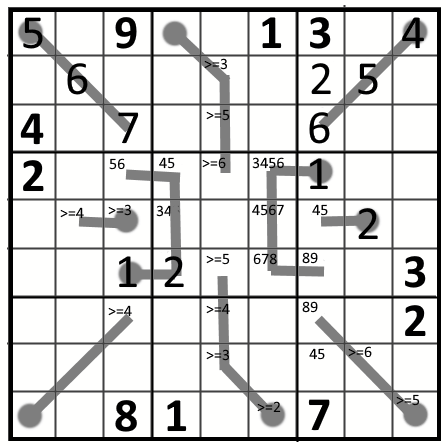 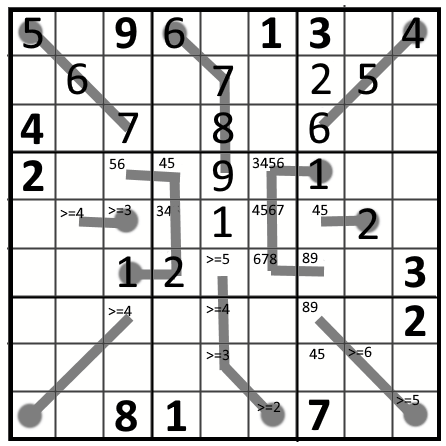 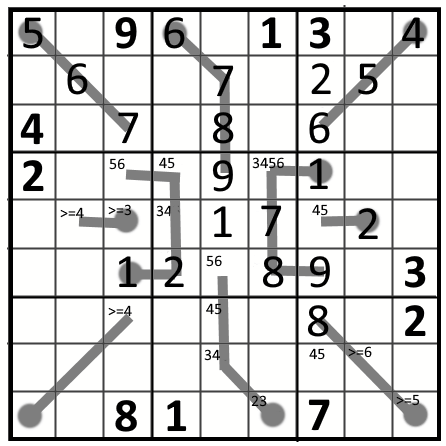 the top row is missing 2,7,8. Its middle cell can't be 7 or 8 so must be 2. The left-hand empty cell can't be 7 so must be 8. So the right-hand empty cell is 7. The bottom-right thermometer's middle cell is >=6; there's a 7 in its column and an 8 above it in the thermometer; so it must be exactly 6; and then the bulb of the thermometer must be exactly 5. The top-left 3x3 is missing 1,2,3, and the only one of those cells that can be a 2 is the bottom-centre one. This in turn means that we can fill in the 2 in the bottom-left 3x3, at centre right, and then the 2 in the bottom-centre 3x3, in the bulb of the thermometer. That's all the 2s. 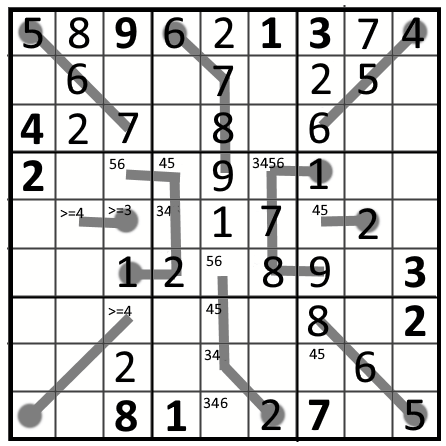 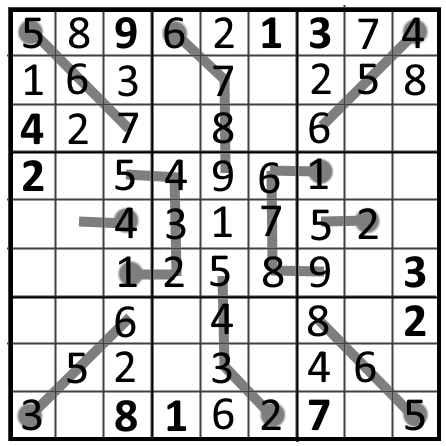 Now all that's left is mopping up. I won't insult your intelligence by showing every step. 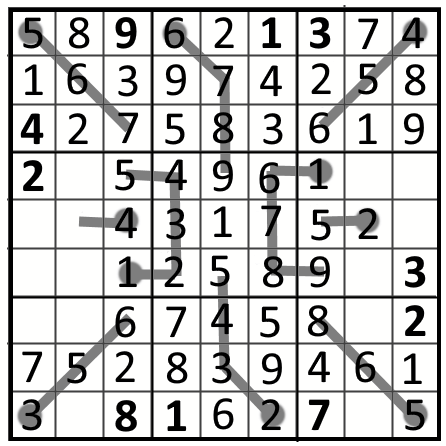 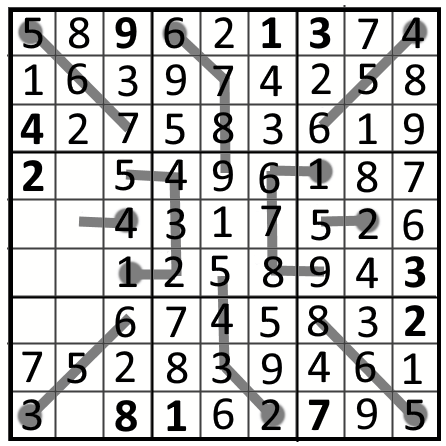 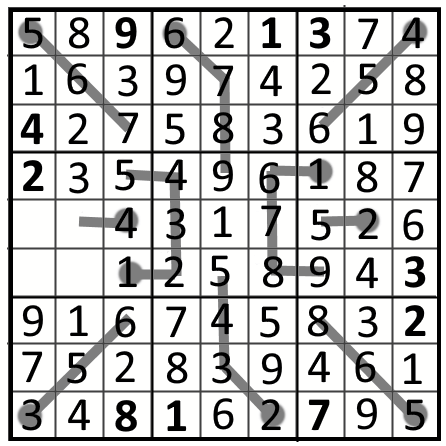 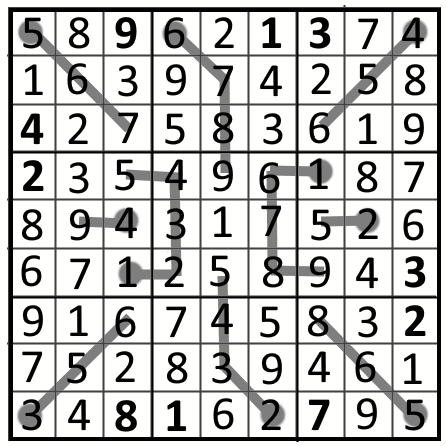 (It doesn't look as if there's any further extraction required after this.)

I guess I should also mention that there is, as one would expect, an informative-in-hindsight pun in the title.

Credit where due: There were two possible answers to question 2, and I picked the wrong one; Stiv pointed out the right one in comments. Thanks, Stiv!

Not the answer you're looking for? Browse other questions tagged logical-deduction knowledge enigmatic-puzzle or ask your own question.

8
Ada and Mr Hopkins - what's it all about?
5
What did I study?
11
Retroprophetic mondegreens
10
Weird song from liner notes of a broken CD
35
What are some examples of "cheat-proof" trivia questions?
14
Sergeant Sequence dodges a bullet
11
The Heart of the Matter, a Sergeant Sequence mystery (fan-fic)
17
A Pub Quiz Joke
6
The Pub Quiz and the Passion
2
The Pub Quiz and the Passion, take two