The square and the compass II - Midpoints

Based on The square and the compass

The rules are almost the same. (The only difference is the actual task, marked in bold.)

You have a compass and a pencil but no scale/straightedge. Your job is to mark four points on a plane paper that would form a square if joined. You are given two points on a plane paper. Your job is to find the midpoint of line segment formed by the two points, if joined. Your result has to be perfectly accurate (not approximate) and should be possible in a finite number of moves. The following moves are valid.

I do not know how to solve this.

I do know how to do it in infinite moves, though.

I fully copied below answer from https://math.stackexchange.com/questions/227285/constructing-the-midpoint-of-a-segment-by-compass

Some Googling revealed the following comments to this answer: 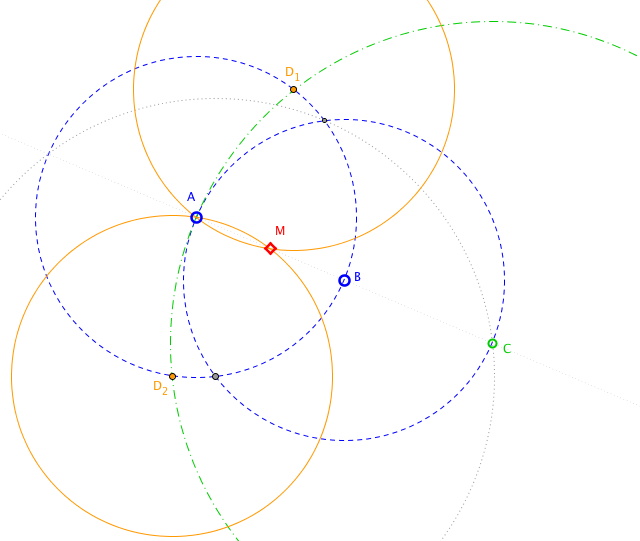 The dotted line is not used in the construction.

Doing this in infinite moves is relatively trivial, so I'll post an answer that does that while I think about the harder problem of doing it in finite moves. Maybe this method will inspire somebody.

Mark approximately the midpoint of the two points. Now use the compass to create two circles of the same radius, such that each has an endpoint as its center, each contains the approximate midpoint, but neither contains the other endpoint (there are many possible radii here, any will do). Then take the intersections of those two circles as two new endpoints and repeat the process. Each time, your endpoints are closer together. Also, since you always use equal radii, the line between the points of intersection always goes through the exact center. Thus, after infinite steps you arrive at precisely the midpoint of the original two points.

Not the answer you're looking for? Browse other questions tagged mathematics geometry construction or ask your own question.

6
The square and the compass