My 8 year old son has a 3x3 Rubik's cube. He's had it for months and solved it many times. He has accidentally (or purposefully) flipped corners, but we've always been able to flip them back and keep it solvable.

But one day he showed it to me and one corner was "flipped" or modified in a way that could not be remedied. The Yellow side was correct, but the green was on the orange side and the orange was on the green side. So there was no flipping that could occur because that piece couldn't physically be oriented in the right direction. I took the pieces out, but I couldn't even put the pieces back in a solved position because it looks like the orange and green stickers were switched.

He does take it to school, so I am leaving open the possibility that some kids did something for fun and didn't say anything (several of them bring in their own). Obviously, my first thought is that the stickers had been switched. But when I go to "switch" them back...they are pretty well stuck. They definitely don't feel like they've been loosed before, and definitely not by an 8 year old. The other thought is that someone must have swapped the piece out with another Rubik's cube, but I have to imagine that the orientation of colors is the same on all cubes.

I'm been messing around with Rubik's Cube a lot few years ago and I can remember doing that kind of stuff. One of my friend really loved to flip corners around when we asked him to mix (not sure if that is the correct word for Rubik's Cube). That was really funny since while we were solving, we realised something was wrong and it made us lose some time.

But another trick that really pissed me off is probably what has been done to your Cube here : if you take a corner out of the Rubik's Cube, you will notice it is not one piece with 3 stickers stuck on it, but actually 3 pieces with one sticker on each piece, and the pieces have slot shapes that allow them to stick together and make it seem like only one piece. So instead of switching stickers, you can switch the pieces of the corner to make the Rubik's impossible to solve.

Here is an image of a corner, the violet lines corresponds to where you should see a slight line which in the junction between the 3 pieces. So the way to fix is just to disassembly the corner (I think you should be able to do it by putting your nail in the junction), put the corner pieces in correct orientation, and put the pieces back together (the slots are a bit tricky, but you should find your way around). 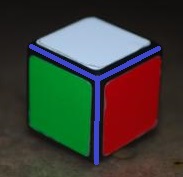 10
5x5x5 Rubik's Cube Smiley
10
3x3x3 Rubik's Cube Illegal State
4
How to determine whether a Rubik's cube is solvable
0
Unsolvable enigmatic 3x3x3 Rubik's cube?
1
Rubik's cube invalid state? Yellow cross starts with odd number of edges
1
Randomly solving a rubik’s cube with only one face given
3
Reapply *some* stickers on scrambled cube
4
Multiple solutions for Rubik's cube?
9
A rubik's cube that fights back
1
Why do centers seem flipped from guide despite centers not moving in relation to each other?