When you exchange the centers on a cube from the solved state, they are swapped in two groups of three. This works for both the 3x3 and 4x4 (as expected), shown in the images below. 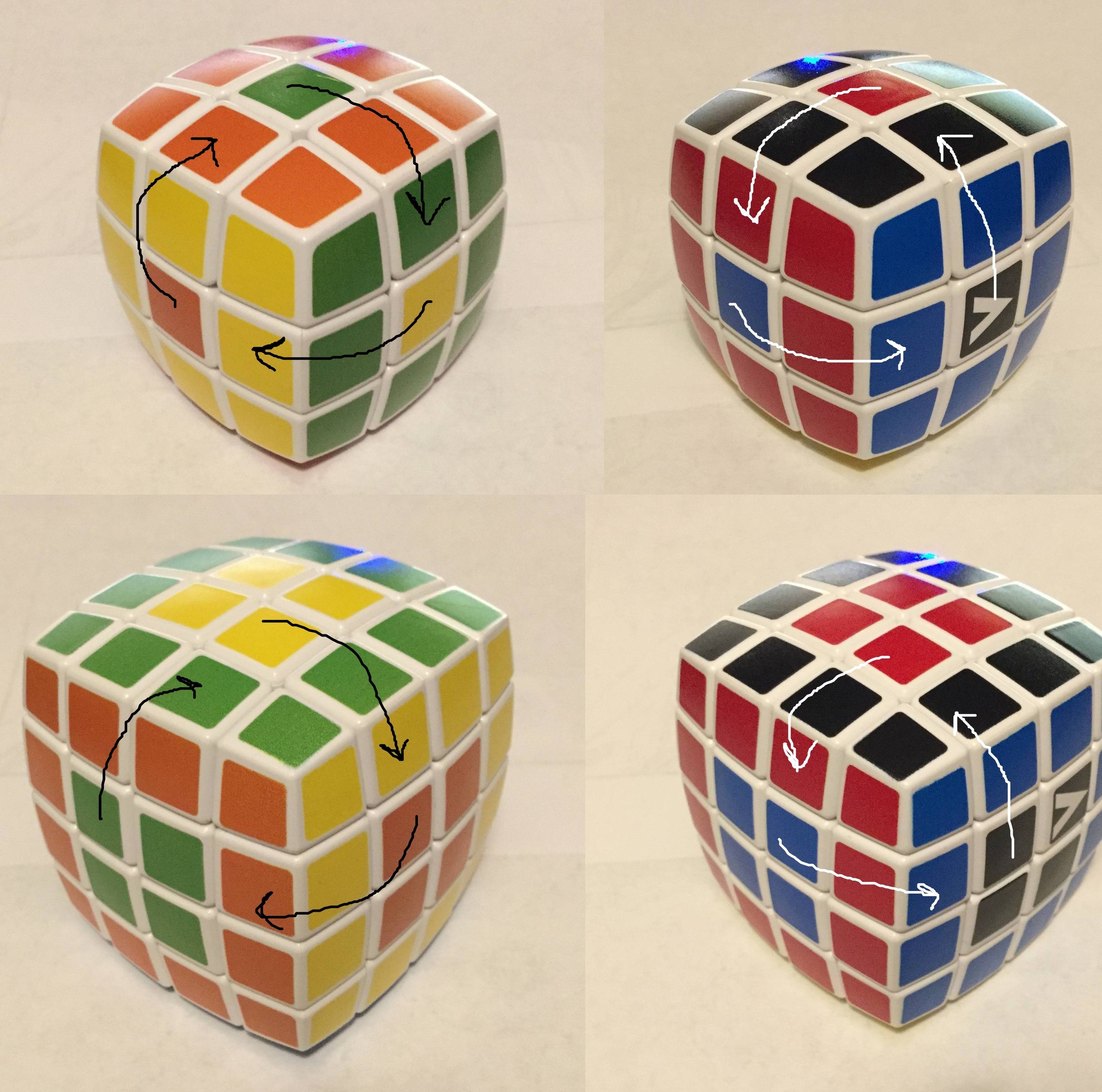 When you solve to (by "solve to" I mean go from scrambled to this state, without solving all sides then trying to get here) these states, it works fine, no problems. However, the other way to exchange centers is by three pairs rather than two triplets. This works fine for the 4x4, shown below.

When you try to solve to this state in the 3x3, something strange happens. Everything solves like normal, except for the last two corners. Normally, this is an illegal state that should never occur, which left me very confused. If you think of the centers as one cube and the sides as a whole separate cube, they both still work, meaning all the colours are in the right spot (with relation to one another). This is shown below. 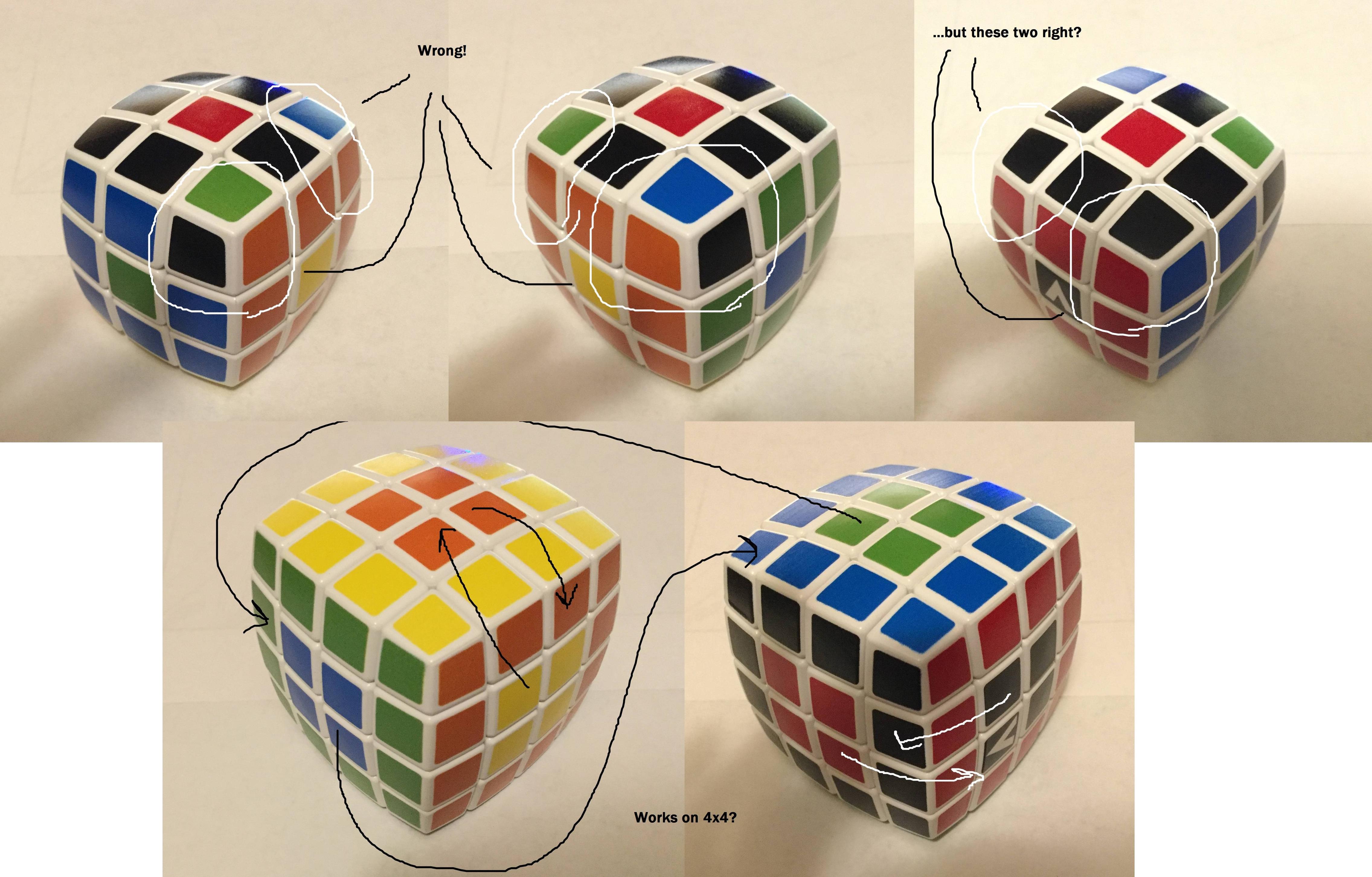 I doubt there is an algorithm to solve this, however I am very curious why this happens. The cube solves normally, the corners haven't been switched or anything. I can't find this happening anywhere else on the interwebs, so maybe you guys can suss it out.

The problem that occurs on your 3x3x3 Cube is called Void Parity. When you solve a Void Cube you can have everything solved, except for two swapped corners. This is due to the "centers" not being at the correct place.

So, why does this occur:

A 90° slice turn is a 4-cycle of edges and a 4-cycle of centres. A 4-cycle is an odd permutation (means an odd number of swaps is needed to reach the original state).

Your situation shows an odd parity of edges whereas the corners are solved (= even permutation; 0 swaps needed to reach the solve state). Doing a 4-cycle (i.e. a 90° slice turn) will switch the parity of edges from odd to even. The parity of centres switches too (this is invisible on a Void Cube, but visible on your 3x3x3 Cube).

An odd parity of one piece group of a Rubik's Cube can only be seen, if another piece group shows an odd parity as well. (Similarly a 90° face turn switches the parity of edges and corners at once. Note that the term parity has to do with permutations of elements for twisty puzzles, and is unrelated to the similar mathematical term 'parity'. See the two posts below for what 'parity' means on twisty puzzles.)

If you want some more general information about twisty puzzle parities, I can refer to these two posts of the Cubers-reddit:

This doesn't answer the Void Cube parity in particular, but should give a more general understanding of what Twisty Puzzle Parity is, and why it occurs on some puzzles (like the 4x4x4 Cube).

Basically, the law of cubes state that:

This last one is what currently happens for you in your second picture. No matter the moves you make with the centers colors and face colors as you currently have, you won't be able to make a single swap of corners since it's an odd swap. (You can still solve the cube regularly, or in the Six Spots or Checkerboard pattern, but not in the configuration like that because of the odd swap it requires.)

PS: Your first picture is called the Six Spots pattern, which can be reached from a solved cube with the algorithm: U D' R L' F B' U D'. :)

An even permutation is defined in a similar way.

The answer to both these is 'no', which I think it's fair to say is not all that surprising in the first case but quite remarkable in the second.

When considering permutations of the Rubiks Cube, it's often easiest to consider the centre squares as fixed, but here I think it's going to be easier to think of them as movable and instead consider the absolute position of the pieces relative to, North, South, East, West, Up and Down, say. There are then three sets of pieces that could potentially be permuted by a movement of the cube: edges, corners and centres.

What you're trying to achieve is an odd permutation of the centres: it can clearly be written as 3 swaps and therefore it will always require an odd number of swaps. At the same time, you're doing even permutations of the corners and edges, as each can clearly be written as 0 swaps! That means that the total number of swaps across the three sets must be odd.

Hence any movement of a Rubiks cube effectively performs an even number of swaps, so you will never be able to achieve the odd total that you're looking for.

Edit: ...sorry, should also have said that the 4 by 4 case is different because there are a different number of 4-cycles involved. Swapping the 3 centres now involves 12 swaps, as each centre contains 4 pieces, so is an even permutation. Meanwhile, odd permutations are suddenly possible anyway, as a middle slice move will perform a 4-cycle of edge pieces and two 4-cycles of centre pieces, so that's now an odd number of swaps in total.

Update: I noticed it's a similar, but different problem. A very similar reasoning should apply nonetheless. Nevermind, as Jaap Scherphuis points out in the comments, it doesn't. I'll still keep the answer since the permutations look quite similar, so people are likely to read this searching for the one I described.

The other answers provide rigorous proof, which is good but sometimes a more intuition-based explanation is easier to understand.

Here's how a friend of mine explained it to me:

The centers of a 3-cube are invariable relative to each other. If e.g. looking at the corner with the red, blue and white/black centers, the clockwise sorting (starting from red) will always be red, white/black, blue.

Now let's look at the orange-green-yellow corner and imagine each center was swapped to its respective opposite face. Taking the same orientation as in your first picture, top-left:

This means we have red, blue, white/black clockwise, which as we established is impossible.

The reason why it works on the 4-cube, is that it has no such thing as invariable centers. The rows in the middle are inner left and inner right, not left center and right center mechanics-wise.