Which 3D shape can you make out of this?

The above shape can be folded into a closed 3D shape using no more than 14 distinct folds, with no parts overlapping. What is special about the shape that results?

I came up with this the other day. I'm not 100% sure the solution is unique, but I think it should be.

If folded as shown below, it can be closed along the matching letters, to form a 12 sided polyhedron with six quadrilateral faces and two sets of three isosceles triangular faces. The quads are arranged in two triplets that join to form two right corners (as found in a cube), and the triangles 'join' the two groups of quads together. The shape has 120 degree rotational symmetry around an axis that passes through the two 'cube-corners'.

The shape is a bit difficult to describe, so I have sketched approximate views of it from two different angles to show, very approximately, how it sticks together.

All the faces are flat as required.

OOPS!!! - My solution is wrong. To fold into the shape I have described, the long edge of the small triangle (and short edge of the long triangle) would have to be of length 2/sqrt(3), not sqrt(2) as it is in the 'cutout'. 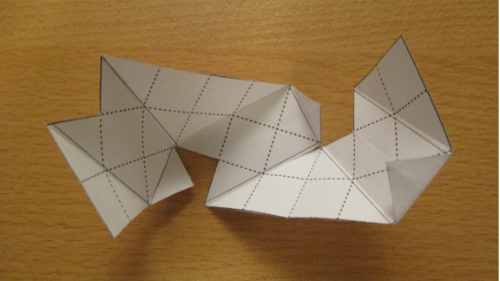 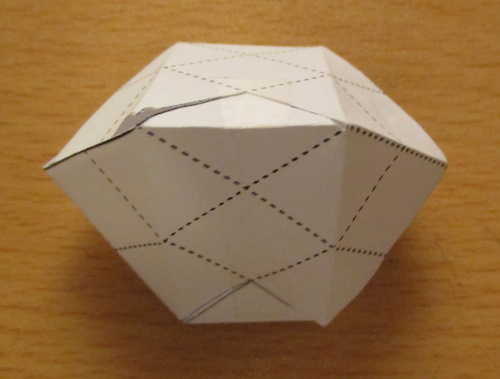 This is the solution I intended, though I've accepted Penguino's Florian F's since it has the smallest number of folds.

Perhaps I'll make a 3D representation later, but the special thing about the resulting shape is that it can be made by cutting a cube into two halves as below, rotating one half by 30°, and sticking them back together. [image source] 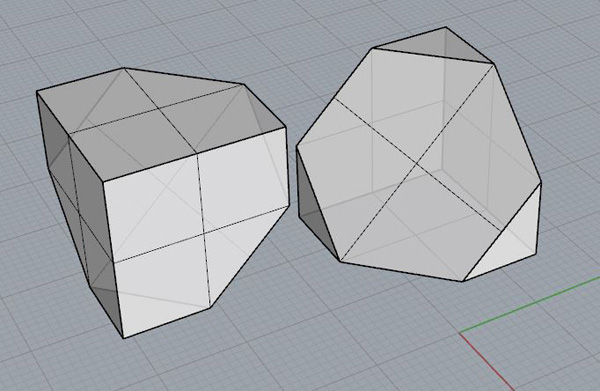 If anyone can think of a good way to change the puzzle so that this is the only solution, please comment!

Not the answer you're looking for? Browse other questions tagged geometry paper-folding or ask your own question.

2
What does this shape look like?
6
Squaring a cross one more time
31
Can you see out of the forest?
15
Ernie and the Slow Glass Solution
79
The Folding Maze
6
A construction on an infinite 2d grid, part 1
120
How can this shape perfectly cover a cube?
17
Can you cover a cube with copies of this shape?
59
Can you perfectly wrap a cube with this blocky shape?
7
Can you fold a paper, make one hole and produce a bear's template?