Ernie and the Superconducting Boxes

I was in anticipation all last week. Ernie, who had been travelling for several months, was finally coming home. So over the weekend I dropped in on him.

He was bursting with news. "Some wonderful duty-free deals at the moment!" he exclaimed. "Whiskey and room-temperature superconductors are on special" he continued, pointing to an enormous barrel in the corner of the room and a very large envelope resting on the kitchen table. Printed on the envelope were the words:

"How can you fit boxes of any sort into an envelope?" I asked, somewhat confused.

Ernie opened the envelope and slid out the contents. "Quite easy if you flat-pack it", he replied. "The boxes come in the form of connected polyhedral nets. You just fold them up and then solder along the joins to make the cubes". But then his face fell - "Dang, there appears to be only one net inside the envelope".

I gathered up the discarded packaging and, with my fingernail, picked at the ACME label. Underneath it was a second label that read: 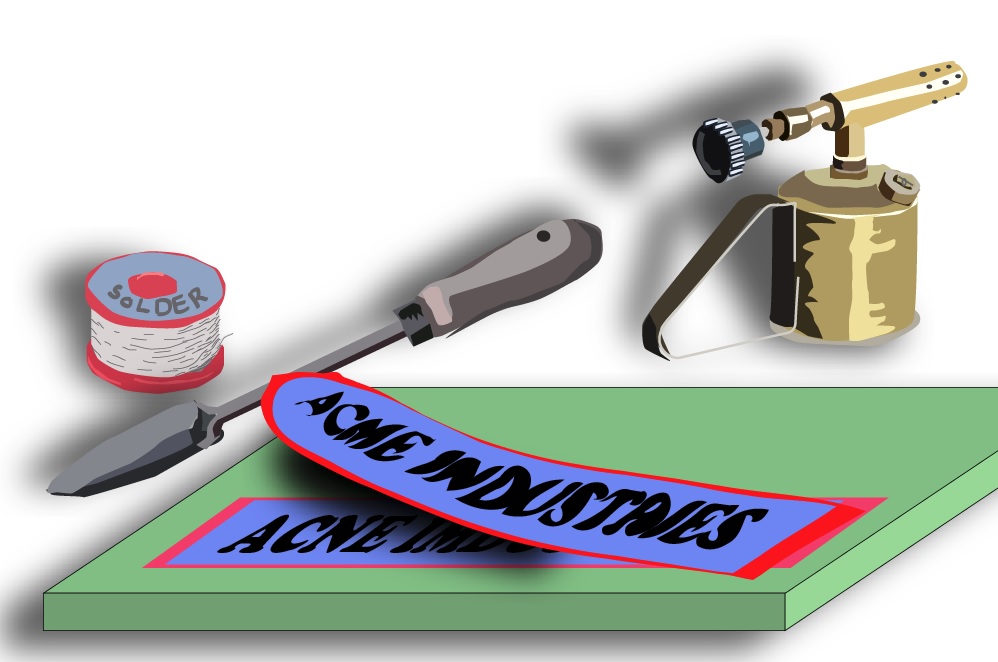 "Gads!!", he exclaimed "another complete rip-off from Kzijekistan! I really need two boxes for my next experiment". He held a small device up against the material and a small light flickered green. "Well," he continued ruefully "at least the material itself is still a room-temperature superconductor, and the net is precisely large enough to fold into a 1m x 1m x 1m cubical box - so I guess I have only been half ripped-off'.

"Well," I ventured, "could you cut the net up to make a bunch of smaller pieces? Then you could fold and solder them to make two smaller cubes".

"Brilliant idea!", ernie replied "the experiment will still work if the boxes are a bit smaller - as long as I have two of them. But it is most important that each box is folded from a single piece of superconducting sheet because the solder joints wont be superconducting." He handed me a small pair of scissors, a soldering iron and s reel of solder. "Tell you what" he said "how about you do the cutting, folding and soldering while I go and find paper and a pencil so I can write a rude letter of complaint to the shop I bought this from?".

I was a bit nervous but eventually worked out how to cut two smaller polyhedral nets from the original (obviously there were some wasted bits at the edges), and assembled two identical cubical boxes. Ernie was most complimentary when he returned and measured the dimensions of the boxes i had just assembled. "Perfect" he said, "the boxes are identical cubes and if I am not mistaken, they are the largest that could possibly be constructed from any polyhedral net for a 1m x 1m x 1m cubical box". He offered to reward me with an amount of vintage whisky equal in volume to that of one of the cubes I had constructed. "Just bring along a large enough container to hold it all and I will decant your share from the barrel."

Wel, I do love whiskey, and want to ensure I get my full reward. But I don't want to appear greedy - it would be embarassing to turn up with a container that was too large. Can anyone help me work out the volume of one of the smaller cubical boxes?

To avoid any confusion

First, we need to figure what is the minimum amount of superconductor that we'll lose when making the cut. Optimally, we can cut the large cube net into two smaller cube nets without any waste at all. Let's start by trying to find such a cube net: 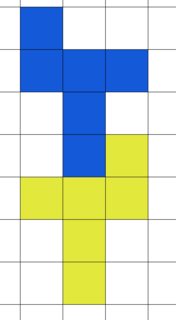 The blue and yellow parts are pretty simple cube wraps, so after the cut, we can easily make the required two cubes. It's a bit harder to see that the whole piece also can be folded into a cube without any gaps or overlaps.

There are two ways to see that it actually works. Let's start with the boring one, and draw the outlines of a simple wrap, and match the pieces outside the borders with the gaps inside: 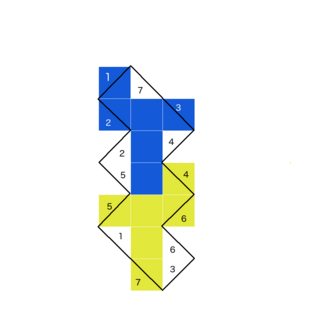 The less boring way is of course to print it out and actually fold it into a cube :-)

If I got all the flaps in the correct places, all the white bits should get covered. And they did! Yay! 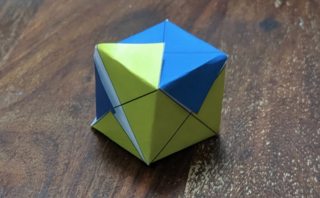 Finding the volume of the smaller boxes won't actually require any of the fiddling above: as long as we have established that it is indeed possible to cut the pieces without any lost surface area, the particulars of cutting and soldering turn out to be irrelevant:

The somewhat lengthy puzzle text boils down to "Design a cube wrap that can be cut into two smaller cube wraps, both half the area of the original." I think :-)

From this, we get that

the edge of the smaller cubes must be exactly $\mathbf{\frac{1}{\sqrt2}}$ times that of the original.

That ratio gives a strong suggestion that we should be using a square-based pattern in the smaller cubes, with the diagonal of a small face serving as the edge of the larger cube.

With this in mind, I drew some simple patterns and fiddled with the positioning of the smaller cube sides until I managed to mostly cover the larger pattern. Then it was just a matter of twisting my brain into half a dozen knots while fine-tuning the positioning so that the triangular "flaps" would actually go where they were needed. I was actually prepared to split some of the small cube faces diagonally (e.g. the flap marked with 6 could start at the gap marked with 6, and the shape would still work and be in one piece), but surprisingly, that turned out to be unnecessary.

Not the answer you're looking for? Browse other questions tagged mathematics geometry word-problem dissection paper-folding or ask your own question.