Using the following clues, determine which baker came in first, second, third, and fourth, which baker baked which variety of cookie, and on which plate they presented their baked goods to the judges.

This was a Problem of the Week from the University of Waterloo, Canada, in 2019.

Belle came 1st with lemon drops on a white plate.
Ralphie came 2nd with sugar cookies on a brown plate.
Pepper came 3rd with ginger snaps on a silver plate.
Emerson came 4th with peppermint crunch on a red plate.

So far we have: 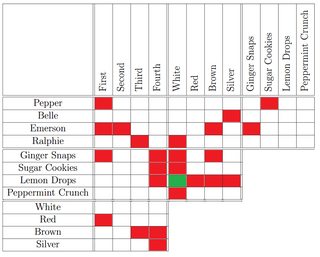 We've completed one box of the logic grid, and we can carry over all those correspondences into other boxes to double our information (e.g. Belle is not silver, so Belle is not ginger) to get 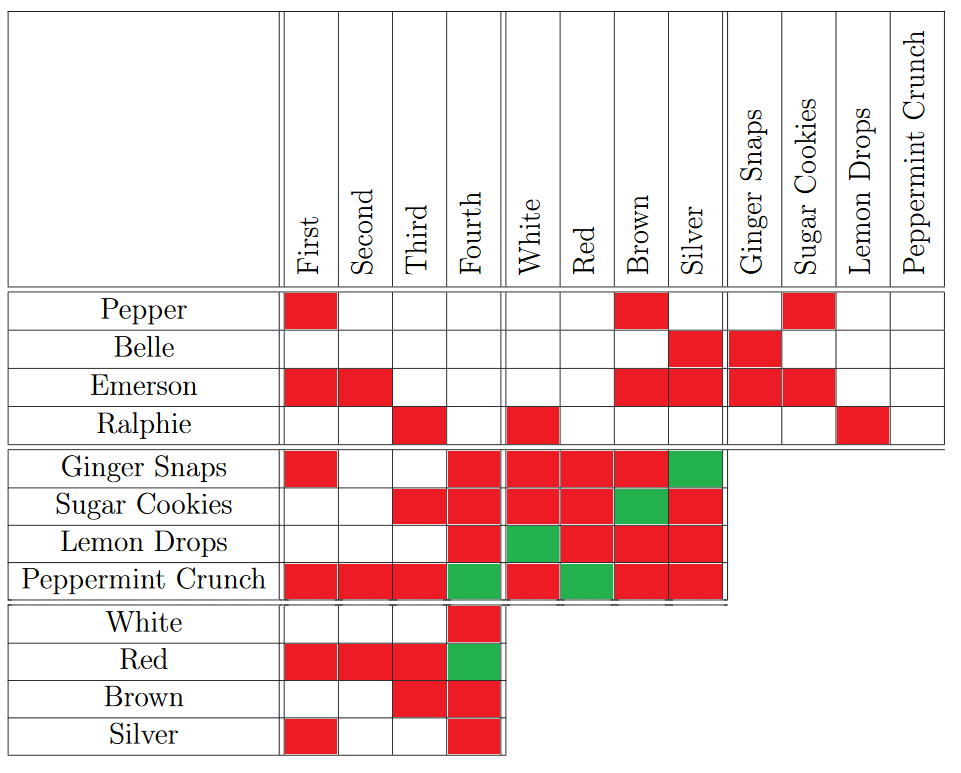 Now we know Pepper placed directly below sugar/brown, which is 1st or 2nd, so that means Pepper can't be 4th/peppermint/red. We also know silver/ginger is directly above red/peppermint/4th, i.e.

And we know Pepper placed directly below sugar/brown, so

sugar/brown is 2nd, which means lemon/white is 1st. Now we have: 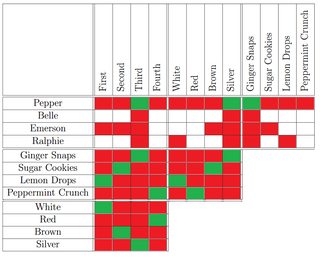 Finally, by elimination we see that

Emerson is 4th/peppermint/red, which enables the rest to be filled in: 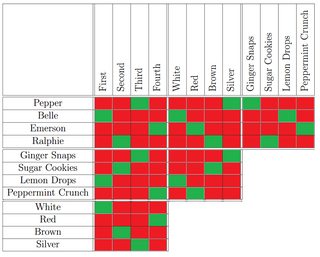 From 1, the brown plate is either first or second.

Silver and Red are adjacent by 3, so we can only have (Brown/White/Silver/Red) and (Brown/Silver/Red/White). The second one violates 4, so the first must be true.
Lemon Drops are second by 4, so from 1 the Ginger Snaps must be third.
Sugar Cookies are first because from 2 they cannot be last, making Peppermint Crunch fourth.
Emerson is fourth by 1, and Pepper is second by 2, so either Ralphie is third (violates 5) or Belle is third and serves on the silver plate (violates 3).

This is a contradiction. Therefore, Brown is second.

Silver and Red are again forced to be third and fourth by 3, making White first.
Lemon Drops are first by 4, and Ginger Snaps are third by 1, so Sugar Cookies are second by 2 and Peppermint Crunch is again fourth.
Emerson is again fourth by 1, Pepper is third by 2, Ralphie is second by 5 and Belle is first.

1
The Great Binary Puzzle - Part 4
2
The great tractor quandary
12
Someone's peeled all the stickers off of my The Witness puzzle! Can you still solve it?
9
Great puzzle makers of yore: #1, Martin Hollis: "The Poacher's Funeral"
12
PSE Advent Calendar 2021 (Day 17): That's the way the cookie crumbles
5
Is "Connect 4 is Excellent, Connect 3 is Great" a solved game?