I found a drawing under a stack of books in my house. It looked like a logical circuit diagram, so I decided to make it. I assumed that I was allowed to put anything in the boxes with the question marks.

And guess what? The drawing was correct, no matter what I put in the question mark boxes.

What was the drawing saying, and why was it correct?

Bonus: Thinking about it more, it also helped me with my physics homework. How? 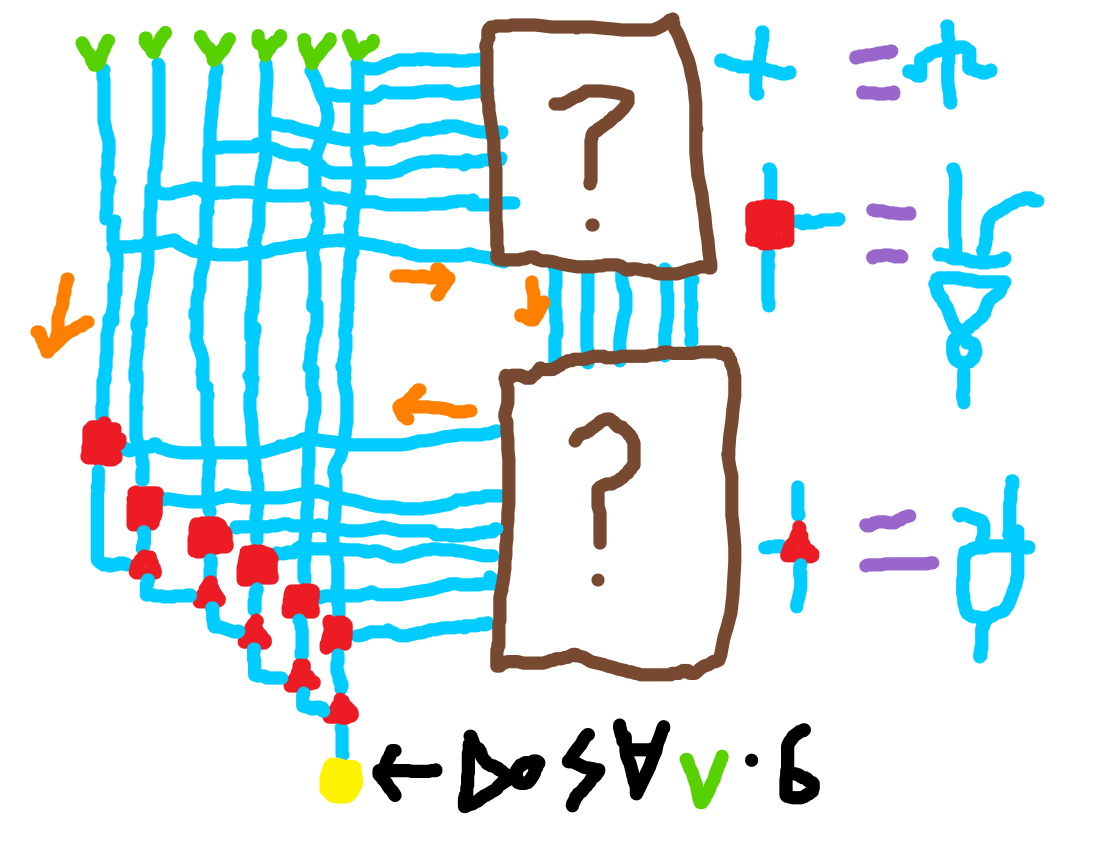 Not a true story

The key thing seems to be that

there are only five (not six) connections between the two boxes on the right; some information is necessarily lost on the way around.

the yellow thing at the bottom is an LED or similar, and the annotation says "this-thing-on-the-left not lit-up for-all inputs". In other words, whatever you put into the boxes, it can't arrange for the signals coming out of them all to equal the signals going in.

I suppose I should say explicitly that

the circuitry at bottom left is testing exactly that, as described in humn's answer.

It's not clear to me, though,

what the rightmost part of the annotation means. If the rightmost symbol were a 6, it could signify something like "... input of size 6", but boboquack has already indicated that it isn't. [EDITED to add: oops, no he hasn't; in fact he conspicuously didn't, and it turns out it was a 6 and meant pretty much exactly that.]

As for the application in physics,

there are a number of things in physics with this sort of flavour. It might for instance point at Liouville's theorem on conservation of phase-space volume, or maybe something to do with the second law of thermodynamics.

The circuit alone rigorously tests one ironic aphorism and another time-tested adage.

“The more things change, the more they stay the same.” – Jean-Baptiste Alphonse Karr
“Some things never change.” – Isaac Newton and others

A specific scientific hypothesis for the overall rebus:

The overall momentum of a (closed) system cannot be changed, regardless of any changes in its components.

The circuit has an input at the top whose components

get copied and split to the right.

The right branch undergoes two arbitrary transformations — change and more change — before returning for comparison against the original input.

The legend along the right of the picture identifies crossings

components as AND gates.

An XNOR gate, despite any mumbo-jumbo, merely tests equality. The AND gates collect the component-wise equality comparisons to see if everything matches and nothing changed.

The bottom line could be (incorrectly, informs the puzzle’s poser) transcribed and interpreted as follows:

“There, on the left, the total change is nil”:    $\displaystyle 0 ~ = \!\sum_\textsf{all inputs} \kern-.5em {\sf input} \cdot \delta$
Loosely speaking, $\delta$ can represent a type of change to be measured and a dot product can represent a result of measurement (a projection onto the direction of measurement).

Not the answer you're looking for? Browse other questions tagged rebus physics proof-without-words circuitry or ask your own question.

9
No Christmas presents until you solve this!
9
The Lazy Laser Physicist: Part 2