I received a package today from a certain Mortin, and I assume that it's some sort of puzzle, knowing him.

Inside the package was a board of letters, remarkably similar to one of his paintings that I'd seen before, 4 green pieces, and some very short instructions that read as follows:

Hi there, friend!
Thanks for visiting my exhibition. Here's a little gift for you which I call 'The Baffling Birdcage'.
I'm sure the first step will be obvious. What might not be so obvious is that you can do it wrongly! In fact, only 2 out of 8 ways to do it will help at all...
Oh, and the answer is 4 letters long. A type of animal I think, but I might have gotten the letters mixed up.

I've made a digital representation of the contents of the package below.

Something I should tell you is that Mortin has somehow defied the laws of physics with the letter 'i' he has sent me - despite seeming disconnected, the dot and the lower part move as one rigid object! How very strange.
Another thing is that the numbers and letters are printed on both sides of the pieces. The orientation of these is not important.

Anyhow, can you help me find the answer to Mortin's puzzle? I think he'd appreciate a reply back, sometime soon... 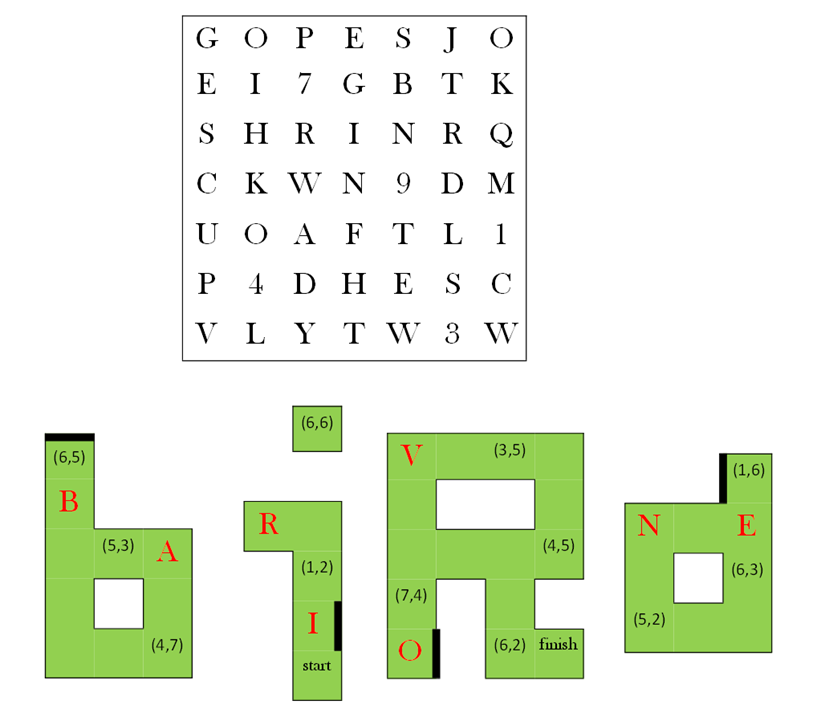 This puzzle is called birdcage for a reason. Try to fit 'bird' in the cage! There's only one unique way of doing this; Mortin seems to be talking about the rotations/reflections in his letter. 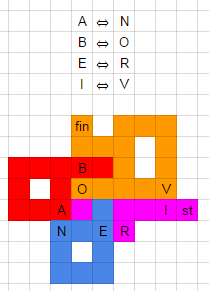 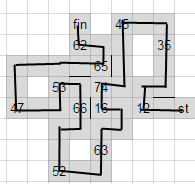 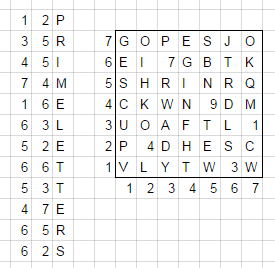 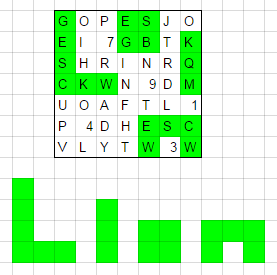 Wrap-up: The Making Of The Baffling Birdcage

The main inspiration for this puzzle was the fortnightly challenge, obviously!
I wasn't quite sure how to use the 'animal' theme in a very meaningful way, so I thought I'd try to make the answer to the puzzle an animal, and the very start of the puzzle to have something to do with animals.

I decided it might be cool to have a packing puzzle - and the pieces could be letters spelling out an animal's name! I tried CAT, DOG, but they had too few pieces to turn out nicely. So, with an extra letter the obvious choice was 'BIRD'!
A bit of fiddling with a computer program and shapes let me fiddle around with the letters until there was a unique solution in a 7x7 packing space. Yippee!

It seemed to make sense that the leftover space would give the solver new information, but what? I had to design another layer to the puzzle and the 7x7 grid wasn't exactly useful...
I begun playing around with the idea that another configuration of the letters would be important. I thought about the correct configuration just having new information written out across the pieces, but I felt like it was too on the nose. I needed another layer on top of this!
A full-route maze seemed like the logical choice. I tried a few configurations until I found one where one or less 'walls' on each piece would force a unique full route solution.

At this point I decided the final would be fun if it hinted at the shapes of letters; it kind of fits the theme of the puzzle with the 'bird' pieces too! So I decided the grid should have special letters - but what property would be non-obvious unless you knew exactly what you were looking for?

Prime position letters! I worked out what they were, and tried to slot them in between other information. 'LION' almost seemed to fit, but turned into 'LOIN'; at this point, I decided enough effort was enough and called the puzzle done :)

Honestly, I just have fun making puzzles and I hope that some of that fun can be had by the solver as well! It's really interesting to try to pack as many layers as I can into a small set of information, and I think this is the most complex puzzle I've made yet (not that that's saying much, since I've been on PSE for the whole of three days and three puzzles!).
In terms of design, I wanted to make a puzzle that seemed fun and approachable - I wanted to make the first step fairly obvious and not too difficult. I wanted some unusual steps (such as creating the second letter configuration), and I wanted the end to be a bit cheeky or unexpected in some way. In other words, I wanted to make a little puzzling journey, and I hope it's one you enjoyed either through solving it yourself or reading @Deusovi's wonderfully diagrammed solution!

Per Hint 1 (which was hopefully a surprise to nobody), the birdcage would look something like * this - 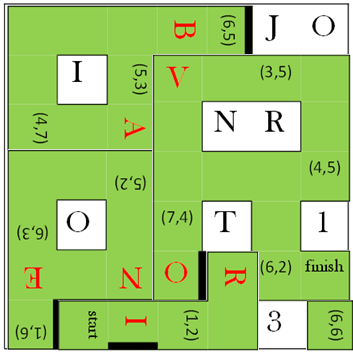 * rotations and reflections of this will, of course, also work

The uncovered parts of the grid left behind spell out JOIN ROT13.

This leaves the letters and coordinates on the pieces, which must be part of a maze to reveal the solution.

Not the answer you're looking for? Browse other questions tagged enigmatic-puzzle mazes animals or ask your own question.

53
A maze puzzle for the day
6
The Hobbyist's Gift
23
Explore the square with 100 hops
12
The inheritance of Mr. Jones
14
Mortin Myes' First Cryptic Gallery
22
Mortin Myes' Second Cryptic Gallery
7
The Piece in the Corner of my Jigsaw Puzzle
14
I need help with my shopping
16
The trip of a lifetime… but to where?
14
A new adventure awaits! Let's go!