I have been solving the Rubik's Cube 2x2x2, 3x3x3, 4x4x4 and 5x5x5, and because things are very similar I thought a 6x6x6 wouldn't be a challenge much. So I bought the C4U 3x3x7 - see image. What I want to know is how to solve it, what algorithms do I need? I can't find any good YouTube tutorials and also not a good website with algorithms and explanation on how to solve it. 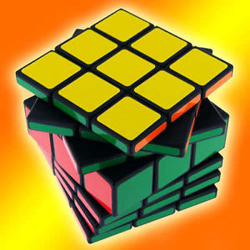 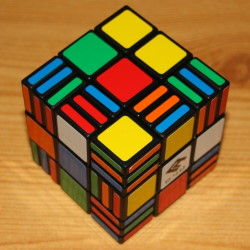 What I found in the tutorials are the next few steps, the first steps I can follow but steps 4 to the end not:

Where do I go from here?

I used to have this puzzle, but now I don't. I apologize if these instructions have a few holes in them - they should be complete, though, as I tested them on a 3x3.

The general method for solving this puzzle is:

The first point of note is that you should leave the cube oriented in one direction for the entire solve, unless you've actively identified that the middle layer is solved. If you don't, you might unintentionally mess it up.

The second point of note is that U and D apply only to the depth of layer that isn't solved. For instance, if you've solved the inside layers on both the top and bottom, U and D only tell you to rotate the top and bottom two layers. Or, phrased differently, once you're done solving the bottom and top layers from the inside out, don't rotate them again. So, if you're trying to solve pieces on the second layer, don't rotate the third layer as well.

Orient the cube so that the rotating sides are facing up and down. These form your bottom and top layers.

The first thing to do is solve the bottom edges by intuition. You can swap any edges with just the right-face rotations. For instance, if I wanted to swap the F and R edges, I would move R2 U' R2 D R2 U R2 D' U' R2 - this may look like a lot, but really all I'm doing here is moving an edge out of position, then moving it back into position over the correct edge. Go through it slowly and watch how the pieces move. The setup positions are actually fairly straightforward.

Next, move the corners into place over the correct positions. Move the corners over the positions where they belong at the FR position, and execute the following sequence: R2 U R2 U' R2; this will move the corner into place. If you're in a situation where corners are all on the white face but in the wrong spots, just remove a white piece with a yellow one, and use the floating white corner to solve the others.

Next, we want to solve the top layer corners. This uses one algorithm, and is pretty simple. First, rotate the top layer so as many corners as possible are solved. Identify corners which need to be flipped. Use the following algorithm to swap the two corners on the top-right side: (R2 U R2 U' R2) [U' D] (R2 U' R2 U R2) [D'].

If two corners need to be swapped diagonally, then execute this sequence:

Follow these steps for all three layers and your puzzle is solved.

Solving the top layer
Emrakul has a good anwser, but the top layer takes a lot of time. To speed things up you can also use the following algorithm: 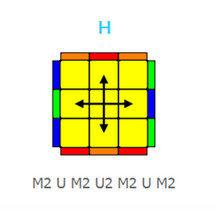 You can come in the situation that you only need to swap the F and R edge then you need the algorithm Emrakul suggested in his anwser.

5
4x4x4 Rubiks Cube strategy
6
Maximal number of steps needed to solve 2x2x2 Rubik's Cube
9
Separating the Pieces of a Rubiks Cube
6
What is the superflip on the 4x4x4 Rubik's cube?
2
Solve 5 last corners in 4x4x4
2
Dayan speed cube 3x3x3 all corners twisted?
2
Is there a good method to solve this kind of Rubik's cubes?
2
Last layer, rotate 3 edges