Luckily, I also have an unlimited supply of small pieces of tape. Each piece of tape can cover the face of two neighbouring squares on my Rubik's Cube. When two pieces are taped together, they cannot be moved away from each other.

What is the minimum number of pieces of tape I must use to ensure that my 4x4x4 will always behave like a 3x3x3?

Your goal is to lock out the middle-slice rotations of the 4x4. Doing this turns the puzzle into a 3x3, because the change from a 3x3 to a 4x4 is equivalent to the addition of the middle slice motion.

You can lock out the middle slices with four pieces of tape. Here's how:

There are three middle-slice movements on the 4x4 - one for each spatial dimension. Each center intersects two of these. Therefore, your first center locks out two rotational axes. If you also tape over any adjacent center, you will also end up locking out the third rotational axis. Therefore, you need only tape over two centers.

The second center requires two pieces of tape, not one. While one piece of tape would lock out the third axis in the cube's initial configuration, if you rotate the center, that piece of tape will no longer intersect the third axis. In other words, without the second piece there, it is still possible to reach a state where you can rotate the third middle slice of the cube, even if it isn't the initial state.

Applying four pieces of tape - two pieces to two adjacent centers - locks out all middle-slice movements, reducing the puzzle to a 3x3.

A partial answer is:

EDIT: more than 3 pieces of tape.

EDIT (thanks to @Emrakul): On one face lock 2 of the centre pieces with 1 piece of tape, stopping all up-and-down rotations.
Then on the top (looking at the face just taped), lock two centre pairs to stop rotations parallel to the face your looking at.
Then on the left face (looking at the same face again), lock two centre pairs to stop rotations through the face your looking at.
You still have independent middle-slice rotations if you line up, say, the initial up-and-down lock with the above parallel lock.

The minimum number of pieces of tape is 2.

Following the logic of all of the other answers in that taping 2 adjacent centres is sufficient, you apply the tape in the following manner: 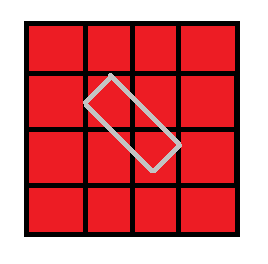 Which achieves the same effect, in locking the entire centre from being split in either plane. The puzzle doesn't state that the tape must be applied directly to cover 2 adjacent squares, only that that's how they're sized.

(Please excuse the hastily-drawn paint image, you get the idea).

The minimum number of pieces of tape is 3.

The goal is to lock 2x2 squares in the middle of the each side of 4x4. To lock a 2x2 cube we need to lock all possible directions of rotation: there are 3 of them (x,y,z). Two of them (say, on the top of the cube) cold be locked by placing L-shaped tape = 2 pieces. And the third one by taping any of the side-centers vertically. So, all of our pieces of tape will be perpendicular to each other, placed on the central 2x2 squares, blocking all possible moves of the center squares.

10
How do I solve the C4Y 3x3x7?
9
Separating the Pieces of a Rubiks Cube
9
Turn 4x4x4 Rubik's Cube into 2x2x2 Rubik's Cube
1
Rubik's cube - Ideal solution book - Rubik's maneuver
5
How to swap the centre squares of a 4x4 Rubik's cube
0
Unsolvable enigmatic 3x3x3 Rubik's cube?
2
Is there a good method to solve this kind of Rubik's cubes?
4
Multiple solutions for Rubik's cube?