Reassembling the Marquetry II: The Coffee Table Strikes Back

After your last fateful encounter with a workbench, you decide to high-tail it out of the woodworker's home. You've gained a new sense of respect for marquetry from your last visit, finding the task of reassembling at tiling interesting at the least, but have no desire to anger an old renowned craftsman.

Unfortunately, in the excitement of running away, you become careless and go careening into the woodworker's coffee table. It falls over and the carefully set design in its top spills all over the floor. What a mess! It looks like you're going to have to repair this design too.

The outline where the tiling fits is shown below on a grid, along with four triangles that did not fall out: 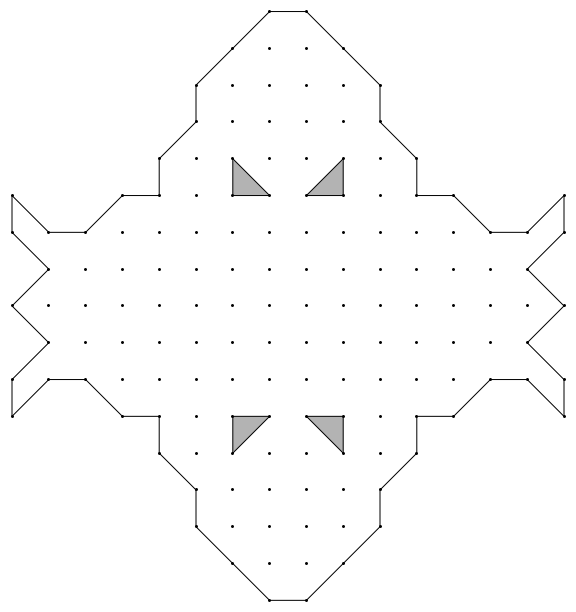 From your brief observation of the piece before you unashamedly bowled it over, you made some rather astute observations. Firstly, the piece was assembled of translations of the following six pieces: 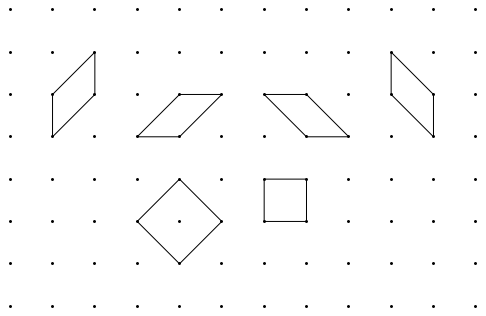 That is, every tile in the marquetry was a parallelogram such that every edge had length $1$ or $\sqrt{2}$ and connected two adjacent lattice points. The entire area shown with the grid, save for the four triangles, was filled with these pieces, having no overlaps nor gaps. Finally, no two of the same pieces ever shared an edge - that is, no two squares ever shared an edge and if two non-square pieces share an edge, they are rotated copies of each other, not just translated copies.

You figure that as long as you reassemble a pattern satisfying all that, the woodworker will probably not notice any difference. How can these tiles be suitably placed?

Try it with this tiling and pray the woodworker won't notice the difference: 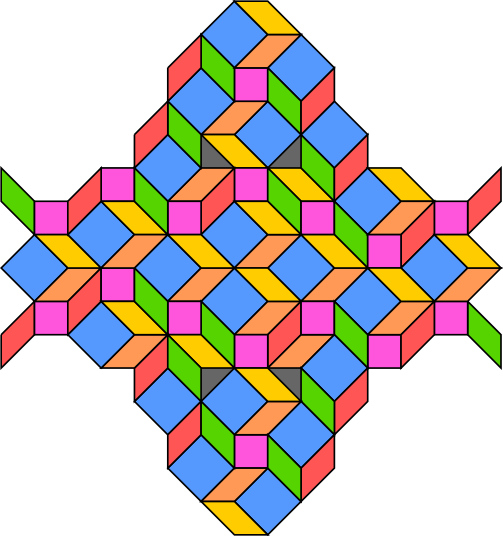 Not the answer you're looking for? Browse other questions tagged mathematics geometry tiling or ask your own question.

25
Tiling a Hexagon with Diamonds
8
Tiling a diamond-shaped grid with tetrominoes
9
Jigsaw Logic: Opheodrys Vernalis
16
Reassembling the Marquetry
5
A minor rearrangement of the one sided hexominoes in 12 simultaneous shapes
3
Hand tiling puzzle 2
6
Tiling rectangles with X pentomino plus rectangles
15
Pulling Apart a Jigsaw Puzzle
4
Double tiling congruent triangles with little else in common