A mysterious letter and email

I received a letter recently. It wasn’t signed and I had no idea who it was from or why it was sent. I binned it thinking it was a joke from some idiot. Probably that weirdo a few doors down, he's really strange.

But then the next day I received exactly the same text in an email. This time I read it thoroughly, but it didn’t make any sense. The writing was all in English but the actual writing just sent a shiver down my spine for some reason currently unbeknownst to me. And the really, really creepy thing was that the email address it was sent from… no, no I can’t say.

I’ve posted a copy of it below: can you help me figure it out? I'm getting slightly scared... 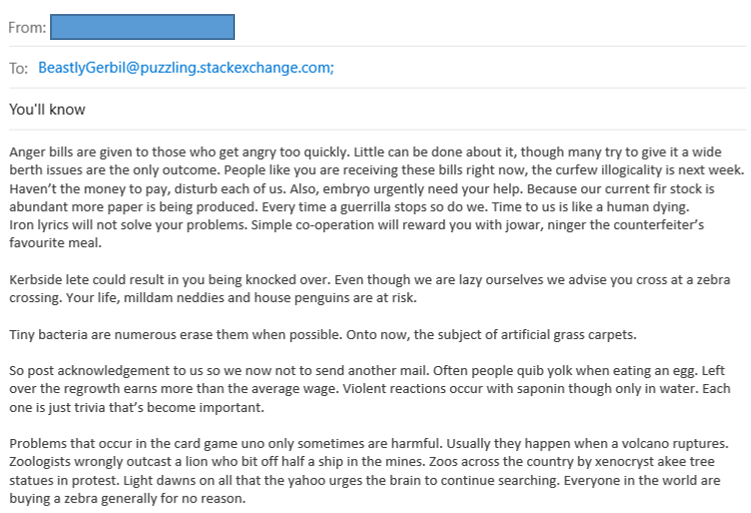 Oh yes, for some reason I left the envelope of the first letter on the side. Just as I was about to put it into recycling I saw something scribbled on the back: 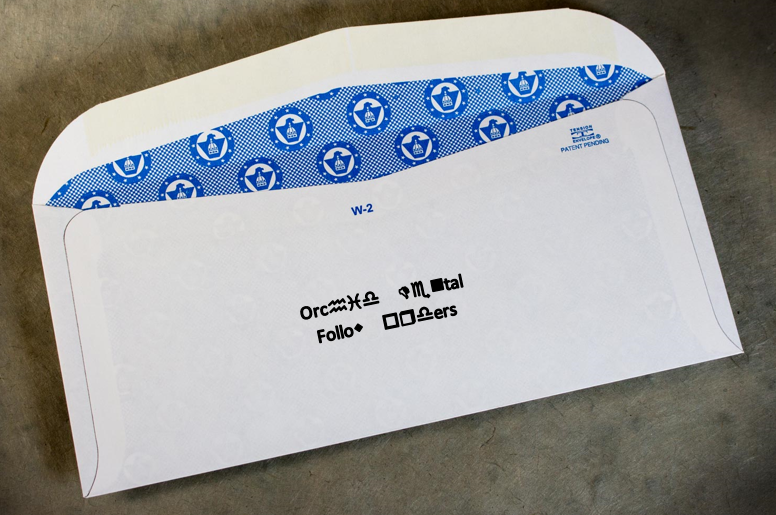 (Note that image isn't mine)

To help here's a text version of the email:

Anger bills are given to those who get angry too quickly. Little can be done about it, though many try to give it a wide berth issues are the only outcome. People like you are receiving these bills right now, the curfew illogicality is next week. Haven’t the money to pay, disturb each of us. Also, embryo urgently need your help. Because our current fir stock is abundant more paper is being produced. Every time a guerrilla stops so do we. Time to us is like a human dying.

Iron lyrics will not solve your problems. Simple co-operation will reward you with jowar, ninger the counterfeiter’s favourite meal.

Kerbside lete could result in you being knocked over. Even though we are lazy ourselves we advise you cross at a zebra crossing. Your life, milldam neddies and house penguins are at risk.

Tiny bacteria are numerous erase them when possible. Onto now, the subject of artificial grass carpets.

So post acknowledgement to us so we now not to send another mail. Often people quib yolk when eating an egg. Left over the regrowth earns more than the average wage. Violent reactions occur with saponin though only in water. Each one is just trivia that’s become important.

Problems that occur in the card game uno only sometimes are harmful. Usually they happen when a volcano ruptures. Zoologists wrongly outcast a lion who bit off half a ship in the mines. Zoos across the country by xenocryst akee tree statues in protest. Light dawns on all that the yahoo urges the brain to continue searching. Everyone in the world are buying a zebra generally for no reason.

There is a clue hidden in the email which is easier to spot.

Gerbil this will be your first last and only warning delete your damn user on stack by the ninth at noon or you take our rage.

Find words that start with a, b, c, d, and find the words hiding between that word and the next.

Credit goes to KeyboardWielder for noticing this pattern in the words that I found on the envelope.

The encrypted letters were written in WingDings font and spell out "HIDDEN WORD". As [KeyboardWielder] mentioned, the phrase "HIDDEN WORD" reveals the method for decrypting the email.

Another telling clue is:

The first letter of each sentence spells: "ALPHABET IS KEY TO SOLVE PUZZLE"

I think I have it (thanks to @Khale_Kitha for translating the envelope):

There are words formed by pairs of words - taking the end of the first and the start of the second.
For example, the envelope has "hid_den w_Ord" and the first word in the e-mail is "ger_bil".

So far I have:

I didn't figure out the key to identifying the words.

90
Fwd: Re: Karen is missing!
7
The mysterious email reply
15
Mr. Yamaguchi's unusual message
1
Can you guess the name of Jim's girlfriend?
9
A very strange email
10
A mysterious email from the World Wildlife Fund
21
I can't work like this!
10
Interesting email I received?
3
More Email Shenanigans
12
What should I do with these emails?