On the table there is a $9\times9$ grid made of matchsticks, so that each of the $81$ little squares is bordered by exactly four matchsticks. Alice and Bob play the following game.

Question: Which player is going to win this game? (As usual, we assume that Alice and Bob both use optimal strategies.)

Fixing some problems with Oray's solution, the winner is

For every position that is not winnable immediately or two separated squares, the current player can always stall so that the other player can't win in the next turn. But the unstallable position has an even number of matchsticks, so it's always Alice who is forced to hand over the game by destroying one of the squares.

Bob's strategy has to leave 2 squares left which are not connected to each other while Alice strategy would be leaving 2 squares together. Because Alice and Bob will continue destroying matchsticks until 2 squares left and none of them will attempt to touch the matchsticks which constitute these last two squares. The reason is if any removes a matchsticks from any of the last square's matchstick the other one will win automatically.

For this Alice will always try to remove a matchstick for the square separated from the other squares while Bob will try otherwise. Since Bob will have lots of options to make squares separated Bob will win if he removes matchsticks optimally. 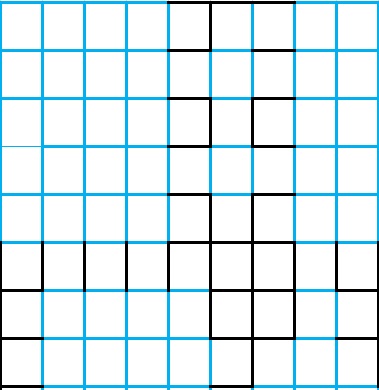 Let say there are 4 squares left next to each other like a bigger square; This is actually the best case for Alice to win this game but unfortunately Bob will not attempt to remove any matchstick from this square in optimal case and Alice will have to remove a matchstick from this square while the other matchsticks are removed. So the game becomes like 2x2 and Alice still plays next. So Alice would have to remove a matchstick and 3 squares left, whichever square is destroyed, Alice will destroy the diagonal square and will make two squares separated and win!

In short, whoever starts as the second will win this game or BOB!

Not the answer you're looking for? Browse other questions tagged mathematics strategy game matches or ask your own question.