Lights in the Dungeon: Hooty and the Message

This is the fifth in a series Lights in the Dungeon puzzles.

There is a lot of flavorful fluff here but, if you want, you can probably just skip down to the map and try to figure out the message without reading everything else.

It had taken you a little longer to solve the eighteen by eleven dungeon map than it had to solve the previous challenges but you persevered. The good news is that, once it was solved, it was pretty fast to run through. There weren't any branching paths so you didn't have to think about which way to go. You emerge from the exit a little tired from the long path (142 rooms is a lot more tiring than 25) and look around for your captor. You spot Lord Hooty McOwlface hunched over a control panel with his grand vizier, Fakky Jim. Meandering over, you catch a snippet of their whispered conversation.

"No, we can't make it too easy! ... Yes, I know it's the same thing but we chose this pattern for a reason. ... Look, I'm the great and powerful lord here and you're the freaking cat! I say the way it's been encoded is fine and we're certainly not going to take the time to change it now."

Your shoe scuffs against the ground and His Lordship whirls around, apparently startled. As his cap settles back down from the quick motion, his eyes narrow. "Ah," he starts, "You're done. Very well. Just sit over there for now. We'll be with you in a minute."

You turn in the direction he points and spy an overstuffed armchair. It's a bit out-of-place in the otherwise dank dungeon but at least it looks comfortable. You settle down, pull our your smart phone - no signal, unfortunately - and try to figure out the WiFi password. Eventually, Hooty approaches you with a gleam in his eye. Is that a smile? Is that what his smile looks like? How disturbing. He begins to orate.

"Congratulations on having made it this far! You have passed some basic intelligence tests and have performed admirably well despite the pressure and very present danger to your person. If you can solve this final challenge, you will be free to go. In fact, I will encourage you to go and give you some riches to help you along. I have encoded a message for you. Your challenge is to decode that message. If you'll just follow me this way..."

You trod behind the despot and he leads you back to one of the dungeon entrances. You're a bit hesitant as you haven't been given the chance to rearrange any of the rooms this time but you don't have much choice when the waiting guards grab you and hurl you bodily into the room, slamming the door behind you.

You stand up and dust yourself off in time to hear screeching from the other side of the doors. "No, you idiots! You forgot to give him the pack!" The doors swing open and a light bag is hurled in your face. As you recover, you hear the doors being closed and locked once more. Opening the pack, you find a pen and a pad of paper. Looking around, you notice a few changes.

First, the other door in the room is unlocked again. You dare not leave the room for fear it will slam shut like it did the last time but it looks like the next door is open, too. You stroll across the room for a better look and you nearly slip on a puddle. Oh, god, is that blood? Why is there blood? You back up a bit and see that it has been very deliberately painted in a pattern. It reads 1D.

You scribble this in your notepad and, after first ensuring that you didn't miss any other changes, you move to the next room. As you expected, the door slams behind you. The next room also has a message on the floor: 06. You move through a few more rooms as you notice that the layout appears to be identical to the dungeon you just solved. They must have followed right behind you painting the blood on the floor but didn't have time to rearrange anything.

Flipping to the next page, you sketch out the dungeon map - you have impeccable memory, good for you - and write the message in each room within the corresponding position on the map. As you finish the last room, you notice that the exit door is not open. Unfortunately, you don't notice this until the door behind you has slammed shut. Now you're trapped in a room with 04 scrawled in blood on the floor and no way out. A voice from the other side of the exit cackles at you and calls out.

"Very good walking, young morsel. I do hope you've been writing things down. Did you recognize the dungeon? Not that it really matters... Now, tell me my secret or I'll leave you in there to starve almost to death. After all, I wouldn't want you to spoil..."

What is Lord Hooty McOwlface's message?

Here is a copy of the map with the encoded message from each room: (you entered in the top left at the green arrow and are now stuck in the bottom right near the red arrow) 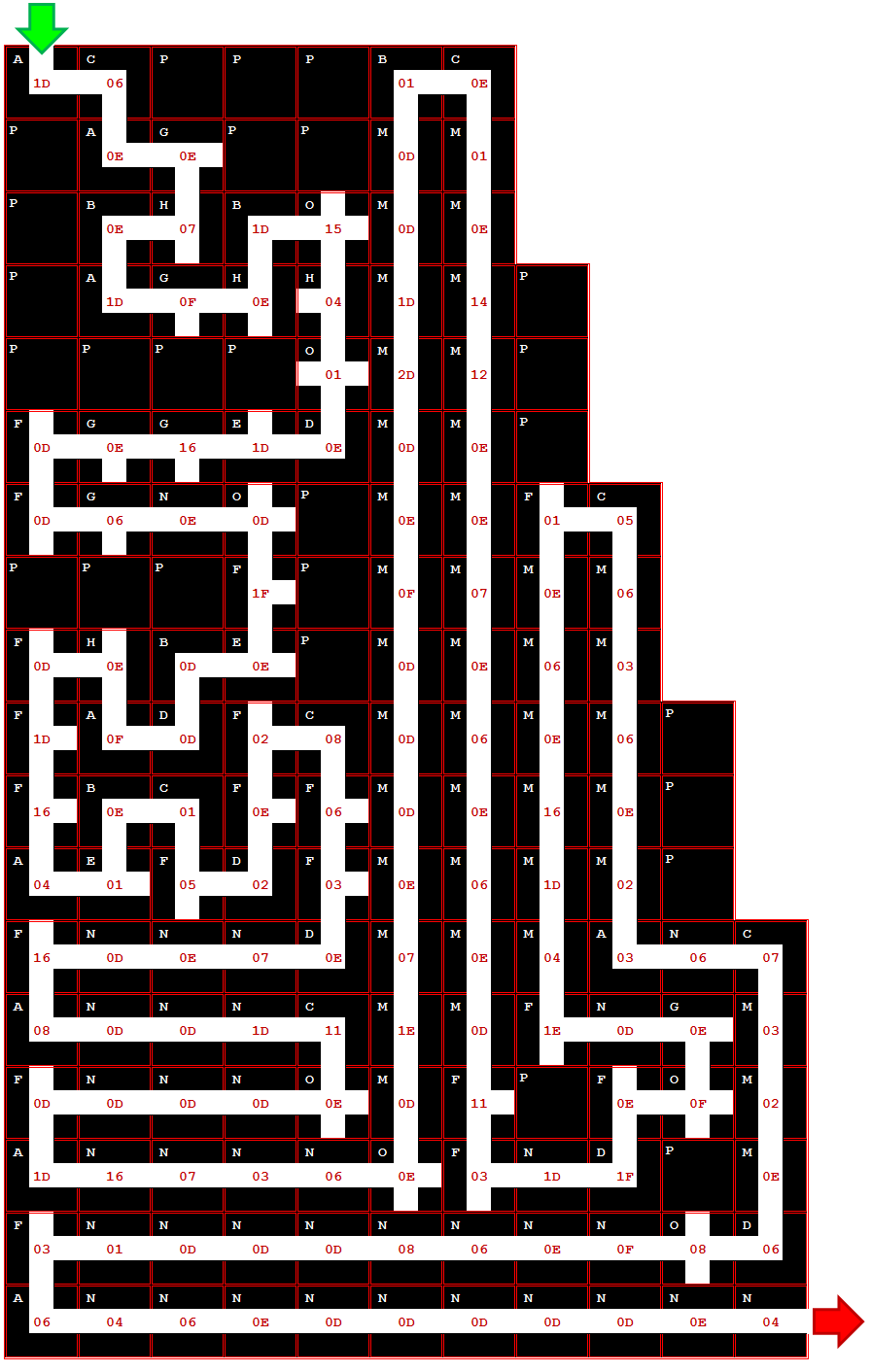 There's nothing to keep track of time in the room so you don't know how long you've been fiddling with your notes when you hear a voice from outside. "Nothing, eh? I was thinking you were oh so clever, too. Well, look, I want someone to finally succeed in this so I'll give you a hint."

For what it's worth, here's the text versions of the maze:

For reference, here are the 16 possible rooms.

The code in each room represents a sequence of 1-3 tiles.

The left digit indicates how many empty P-type tiles are at the start of the sequence. This must be so because the sum of all the left digits on the path equals 26, which is how many P tiles are in the maze.

The right digit indicates what type of non-empty tile is in the sequence. Each digit maps to a tile:

So the first few tiles in the path 1D 06 OE decode to `PM F N". The full decoded sequence is:

If you lay these tiles out left to right in the stair-like pattern of the maze, you get this: 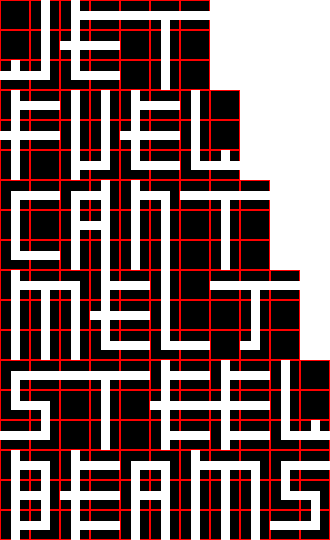 Which appear to be a block letter representation of the message:

9
Lights in the Dungeon: Eighteen by Eleven