What do the Glyphs from the Tale of Genji represent?

The Tale of Genji is a classic japanese novel, probably written more than a thousand years ago. The 19th century artist Toyohara Kunichika painted a picture for every of the 54 chapters.

Every picture is showing an open book, on the pages of which a glyph is repeated. For each chapter, a different glyph is used (also referred to as crest or Genjimon). There is a system to their creation. 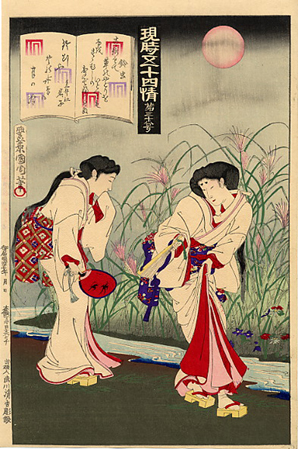 Here you can browse through Kunichika's paintings (there's a previous/next navigation). Unfortunately the details under chapter 18 are messed up, but one can recognize the pattern anyhow.

Can you make out the system and the 'mistakes'?

Edit: It is not necessary to know Japanese. Do not base your deductions on the summary linked to below, the representation of the brushstrokes is deceiving. Use it only to identify the indistinctly painted glyphs. The order of the glyphs is of no importance.

If you find it too hard making them out, view this glyph summary.

Certain glyphs are duplicates in terms of the system.

My lucky number can be found here.

It looks like these represent partitions of a set of 5 items.

But there should be 52 only according to https://en.wikipedia.org/wiki/Partition_of_a_set.

3
Task 39 from iqtest.dk
2
What is the next colour?
6
What is the letter?
1
Can you find the pattern? What two letters are missing from this sequence?
0
What are the missing patterns? (From a 5th grader's school book)
9
What is the next symbol?
7
Tricky riddle from sister
4
Find the code from the image