1 lion, with a zebra and a fixed enclosure

See the puzzle Variant of lion and 100 zebras from @ghosts-in-the-code which remains unsolved years after it was posted. Several times in the last couple of years I've started to write up an answer, only to get caught up in some finicky details that are needed to prove whether the lions can actually catch a zebra, or merely keep it trapped forever, and stupidly failed to keep copies of the partly-written solutions. Given the age of that other puzzle, it doesn't seem fair to post a partial answer at this stage... instead, I'm breaking down my intended solution into a series of other sufficiently-interesting puzzles, so that if I ever try to attempt a full answer again, I'll at least have the other elements available to link to or copy from (and if someone else gets the full answer to that puzzle first, so be it!)

This is a turn-based game/simulation. On each turn, a single lion may move in any direction on the infinite plane by up to 100m. After this a single zebra may move in any direction by up to 100m. Where there are multiple lions or multiple zebras, each "team" can choose which of their members to move each time their "team" has a turn. Turns repeat indefinitely. Lions win if any lion may, on its move, reach the position of any zebra. Zebras win if they can evade capture forever.

Puzzle 1: Is a zebra trapped in a fixed enclosure?

The enclosure has a single opening from which the zebra can escape unless the lion can effectively block it. This opening may be of any size from a few metres (allowing the lion to keep the zebra trapped forever if it can merely reach the middle of the opening before the zebra can get there) to many kilometres.

The shape of the enclosure is not intended as important, but comments highlighted some edge cases where it may be make a difference. You may thus assume whatever convex shape is convenient for your calculations, or as a bonus answer you may prefer highlight any regions where it really does make a difference. To avoid creating unintended restrictions, when passing the end of the enclosure boundary, either animal may make change direction as needed during its movement of up to 100m.

For the purposes of this puzzle, a single zebra starts at a random position within the enclosure, and the lion starts somewhere outside the enclosure. 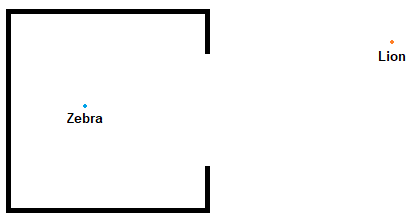 Sub-problem A: when can the zebra escape?

For what starting positions of lion and zebra relative to the opening of the enclosure can the zebra guarantee to escape? How?

Sub-problem B: how can the lion keep the zebra trapped?

For any starting positions not meeting the condition for sub-problem A, what strategy can the lion use to ensure the zebra never escapes.

Sub-problem C: can the lion force the zebra into the enclosure? 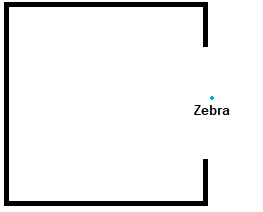 Let's focus on the

bisector of the two animals' positions just before the next move.

The zebra can never cross it without immediately being caught.

As long as the zebra moves a straight 100m without touching the bisector the lion cannot catch it in the next move.

This already resolves C as

once the zebra is outside the confinement there will always be an obstruction free direction away from the bisector.

To avoid tedious edge cases I'll assume that the enclosure is a rectangle with one side completely open.

The lion wins precisely when the opening falls entirely on the lions side of the bisector. Indeed, by mirroring the zebra's moves the lion can fix the bisector exactly where it is and there is no way for the zebra to make any progress.

If the bisector is outside the confinement or crosses the opening at least one of the two corners flanking the opening will be on the zebra's side. The zebra can move straight there being careful to use up whatever is left of the last 100m step moving as far away from the lion as possible.

51
The lion and the zebras
27
The lion and the zebras II: The lion with millimeter-long claws
38
Variant of lion and 100 zebras
10
Precision Tag - can the lion win?
12
Tree-pruning game with the devil
26
Lions and Zebras on a Chess Board
13
Rabbits, wolves and lions in a magical forest
13
Spiders on a cube
1
Can you escape from two lions?