Asymmetric Logic-grid "Brentwood Puzzle": What are these people doing?

Three men, including Gianni and three woman, including Sachi are in line at the BrentWood post office. Each has two different pieces of business to conduct.

Can you figure out where each customer is in the line, his or her full name (one surname is Loti) and the two things he or she wants to accomplish? Provide your answer is POSITION - FIRST NAME - LAST NAME - BUSINESS - BUSINESS format.

The in general way was to go forward in finding a loophole information which will let us either match someone with job or sex or position but I couldn't do either. Please guide.

Source: I have obtained this puzzle from a book called "400 Puzzles (Infosys)" which is the collection of different variety of puzzles asked in "Interviews of Infosys"

Note: The answer is provided but the the way to arrive at the solution can't be just trial and error method. So if anyone can guide how to proceed rather than just reiterate question I'll be obliged.

Not yet an answer, but just clearing up what is found in the puzzle.

We know that Loti is a surname, but we are not given explicit information on the rest.

We can use social norms to guess that the first names of the men are;

while the women are;

This leaves the following as last names:

Is this too presumptuous?

There are 12 tasks. These are;

The clues then are;

It is possible to solve this puzzle, using only 2 guesses (in each case between 2 possibilities) using a more or less standard logic grid.

Whether it is possible to solve without guessing, i.e. by using a more clever logic-grid, I don't know.

In any case, here is the solution I found: 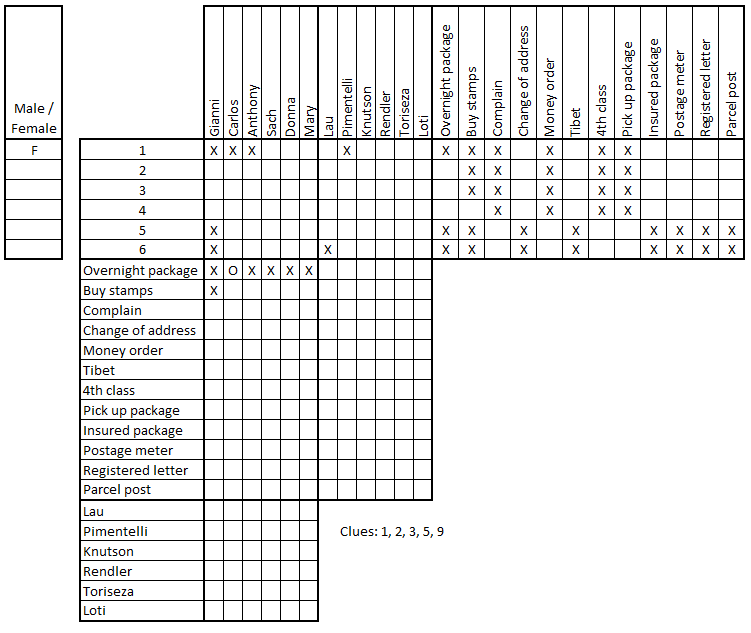 Assuming the first names can be directly correlated to the sex of individuals (as posited by @Trenin) and using the clues mentioned in the image above, we get the above result. Notice that on the left side I have introduced an auxilliary grid which keeps tabs on whether a row is Male or Female. Moving on... 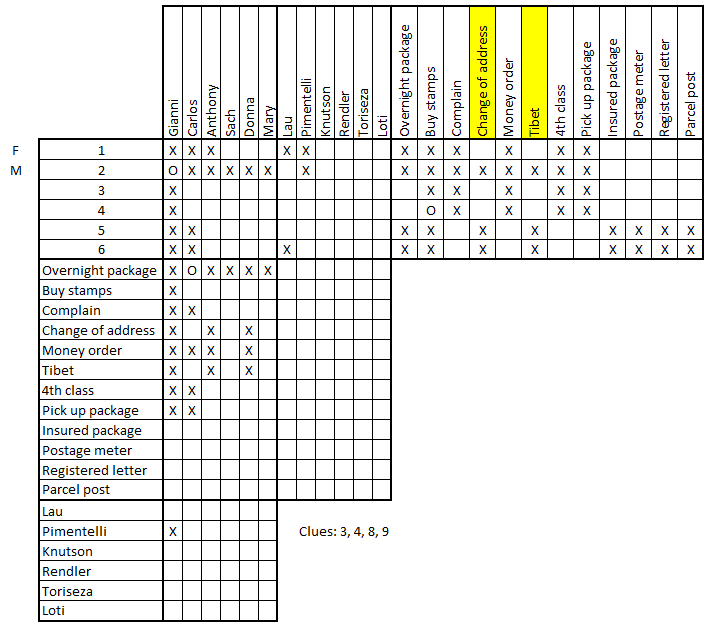 Using the clues mentioned above (clue numbers according to @Trenin) we get the above result. The yellow colorings indicate that a single person cannot have both colorings. 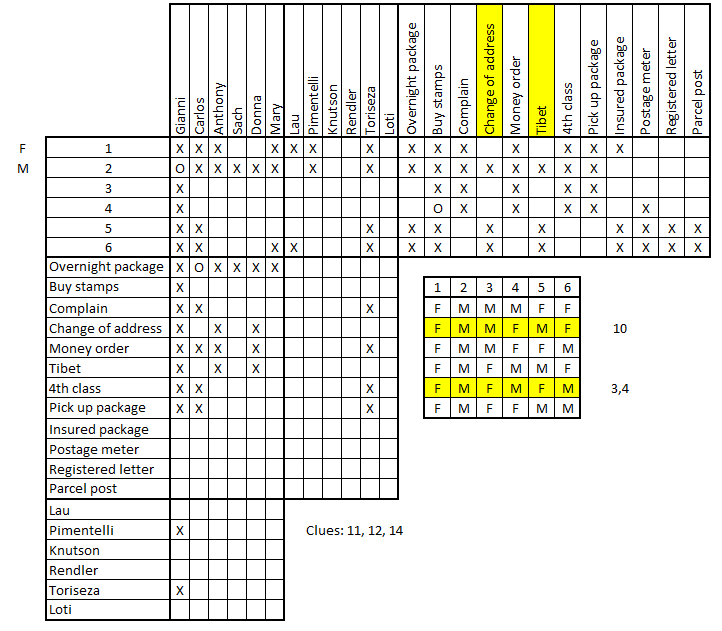 I have now introduced another auxilliary box which keeps track of the possible orderings of Males and Females in the line. Yellow rows are not possible. To the right of this box are the clues used for this deduction. At this point I got stuck and had to guess.

Carlos could be in either the 3rd or 4th position and I guessed the 4th: 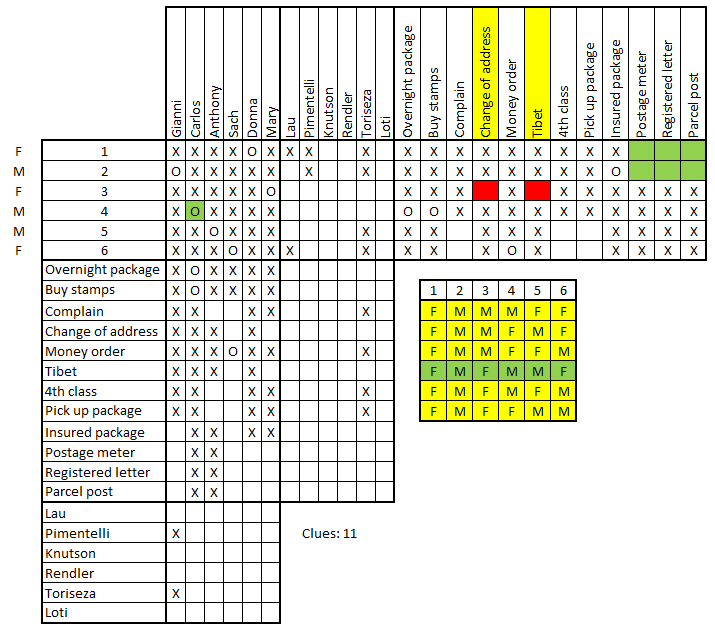 This quickly led to a contradiction. 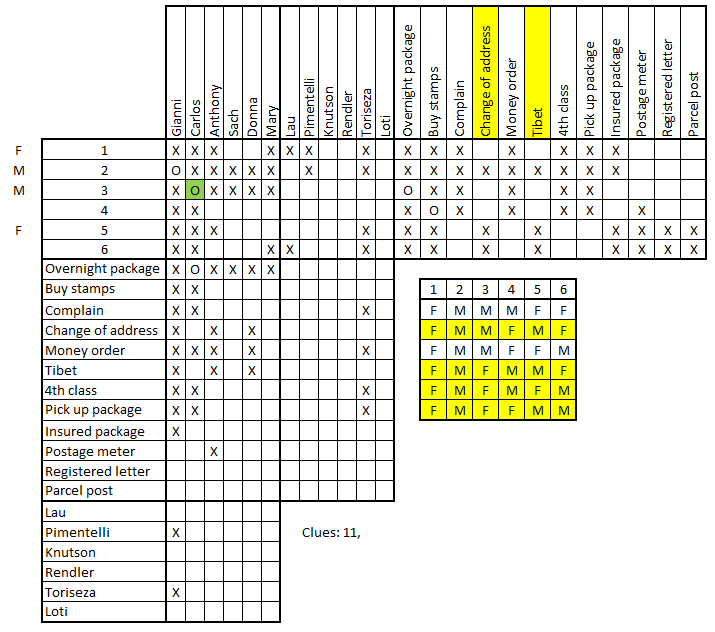 I now got stuck again.

Anthony could be in only 2 positions, so I guessed he was in position 4: 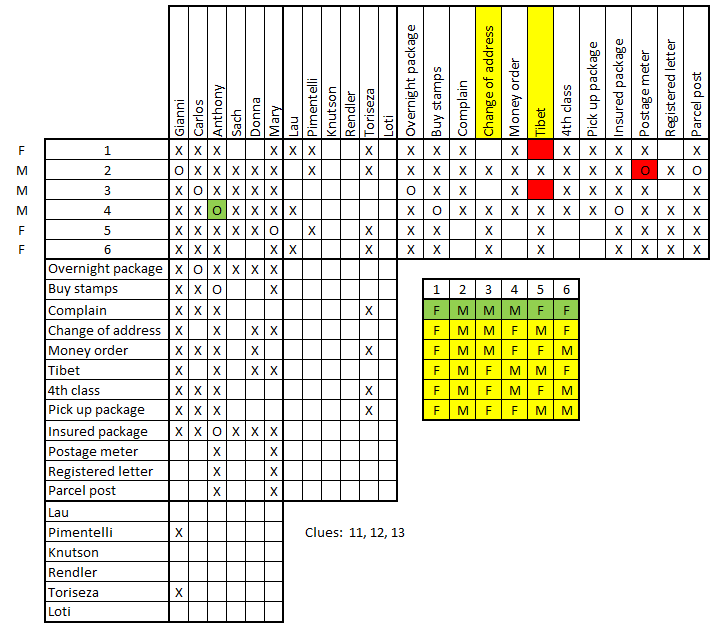 This led to the contradiction shown above.

I.e. clue 12 cannot be fulfilled. Hence, Anthony could only be in position 6. This quickly led to the final solution, shown below: 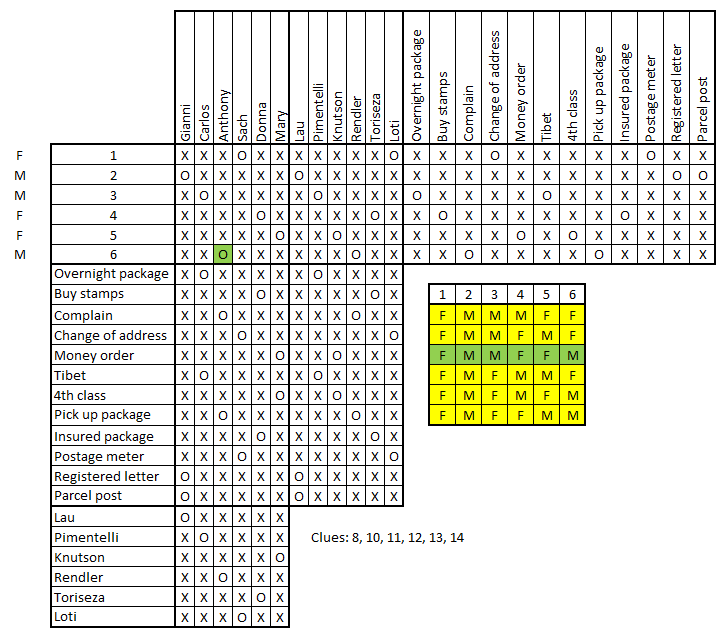 I'd be very interested to know if assymetric logic grids like this, i.e. where N objects have more than 1 choice each and/or less than N choices each, are possible to set up in a logic grid, similar to normal logic-grids.