Here's a variety cryptic for your puzzling pleasure. The clues are cryptic, but as you can see below, the grid is unusual. Axial clues are entered from the outside in. Around clues are entered in order according to a pattern created by the Josephus Problem. The first letter is entered in some location (not necessarily where the letter indicator for the ring is), and the subsequent letters are entered by skipping some fixed number of empty spaces, circling around the ring as necessary. The number of spaces skipped is fixed within each ring, but may vary between rings; note that none of the skip numbers is greater than 8. It is up to you to determine the initial location and the number of spaces skipped, but the clues are entered clockwise. I wish you luck! 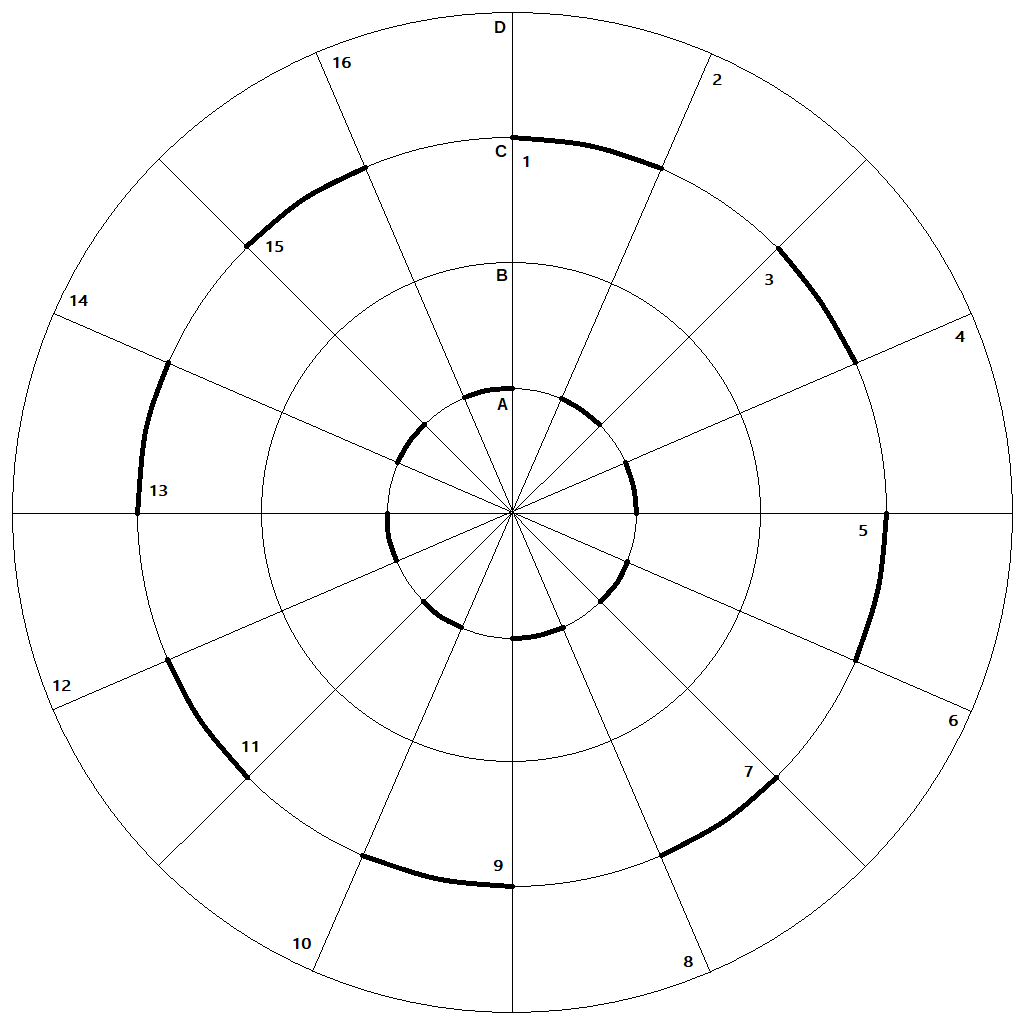 Around the Rings
A1: Short-form writers are uncommonly terse after discarding some characters out of twenty (8)
A2: Short story of small girl, with brother, riding horse uphill (8)

(Original had these clues reversed in error, thanks to @jafe for catching.)
B1: Former king hangs around ample, toned model (8)
B2: Positioned top-knot after weaving sinew in creating vintage bag? (8)

D1: Putting laundered baht in action is final stop in lifecycle (8)
D2: All the People: variety show about mass movement (8)

2. Alternative selection from bassist lays down bottom with a groove (3)
_A_S_S_

5. South's short for partner in clubs, requiring bid (3)
S+IS – Club requiring bid is a sorority, whose members are sisters (thanks OP)

6. It's slippery around frozen precipitation after scraping perimeter (3)
(-t)EEL(-s)<

A1: Short-form writers are uncommonly terse after discarding some characters out of twenty (8)
TWE_+ETERS*

C2: Airline, incorporating group of lawyers after I left, becomes no better (8)
UN(-i)(ABA)TED – ABA is the American Bar Association

D2: All the People: variety show about mass movement (8)
MAN+EUVER<

Figuring out the desired order for rings

Ring A fits the grid if we skip five spaces each time. 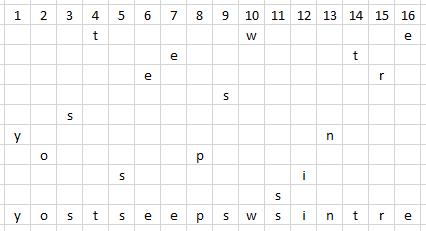 Ring B fits the grid if we skip two spaces each time.

As it happens, ring C also works if we skip two. 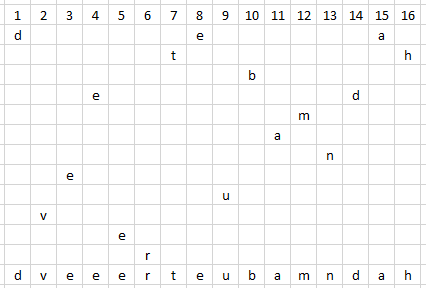 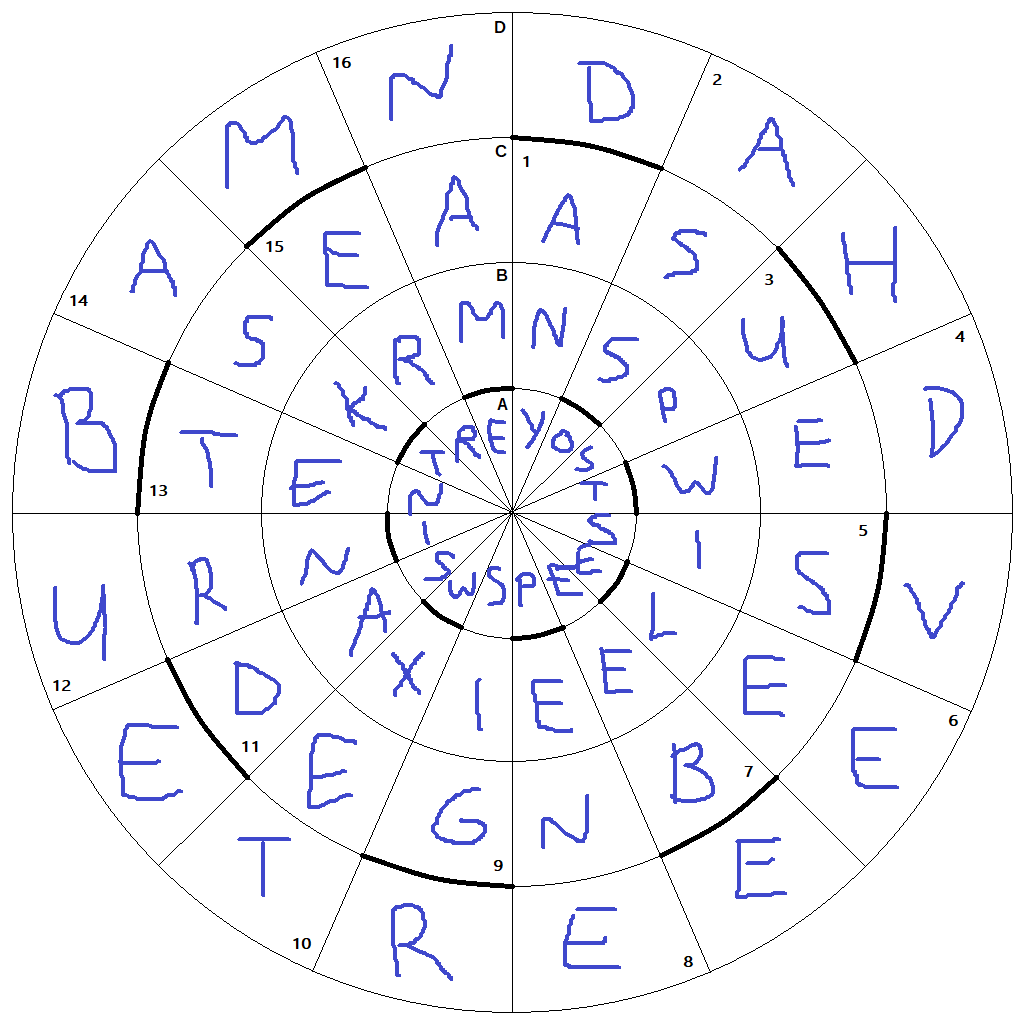 This was a really enjoyable puzzle. I found it pretty difficult! A large part of the axial clues need to be filled without any help from the grid, since you can't rely on any letters from the around clues until many of the axial clues have been placed.

I ended up just trying all combinations to fit the around clues into the grid. Maybe there's a more clever way to work them in? It's not a pattern I can visualize in my head. Ring A was especially difficult, since neither of the first two letters were included in the checked squares, so there were a lot of possible combinations to check.

I'd advocate caution when using two- and three-letter acronyms, simply because there is such a large number of them. I was not aware of GI as a medical abbreviation and had to look that up, and I spent some time searching why DAS means "chargers" before getting the pun. (Apparently there are a lot of things named DAS, which is surely true for many three-letter acronyms.) It's good that the wordplay in those clues is relatively straightforward, so there's not much danger of finding an alternative answer that fits the clue.

ENE from Deneb, primary star in the constellation of Cygnus

Not the answer you're looking for? Browse other questions tagged cryptic-clues cryptic-crosswords or ask your own question.