Is there a way in which all the members can be seated?

Here's a puzzle where it is very difficult to find a possible seating arrangement of all the members. 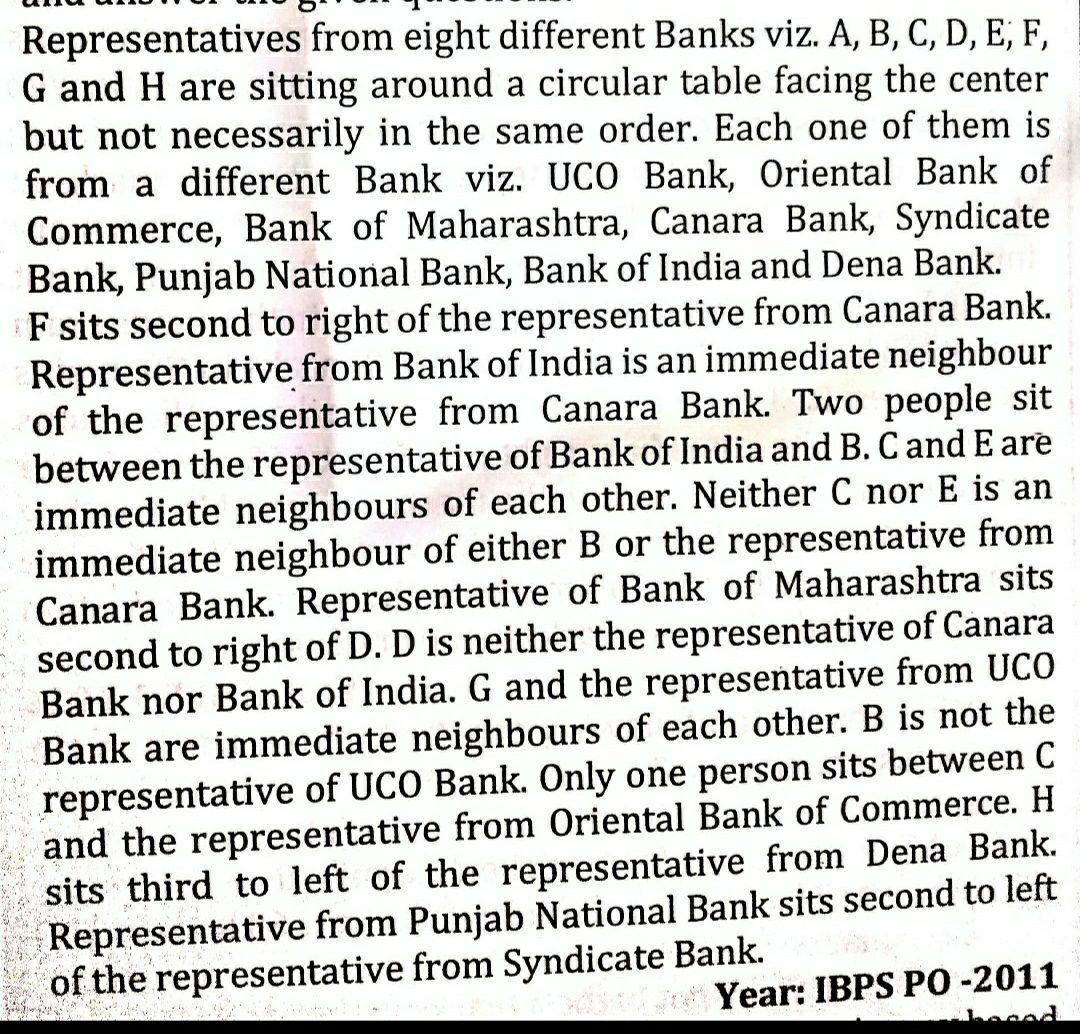 I have been struggling to solve it. I have devoted so much of my time trying to figure out solution.

Source: This is a question from an aptitude and reasoning based exam conducted in India for recruitment purposes and Banking and Financial sectors, also sometimes to top Management Institutes (Institute of Banking Personnel Selection Probationary Officers Exam, 2011).

Here's a solution which explains the logic... 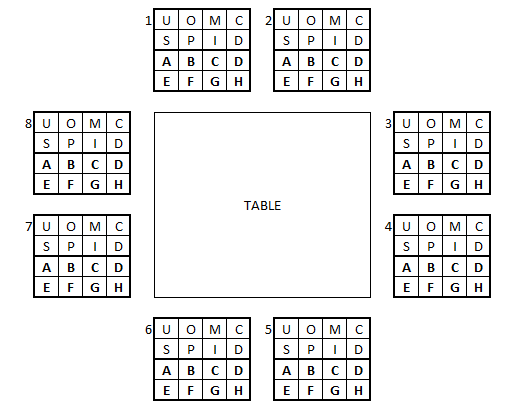 Let's fix the positions of Bank C and Rep F; we will then be able to anchor all the logic which follows off them. Arbitrarily, let Rep F occupy seat #1. This means Bank C must be in seat #3 (since Rep F sits second to right of them). Moreover, Bank I can then only occupy either seat #2 or seat #4 (since they sit next to Bank C).

Additionally, using the next rule (Two people sit between the representative of Bank of India (I) and B), we know that B can only be in seat #5 or seat #7, since these are the only unoccupied seats which might be three spaces away from I (thereby having two people between them). 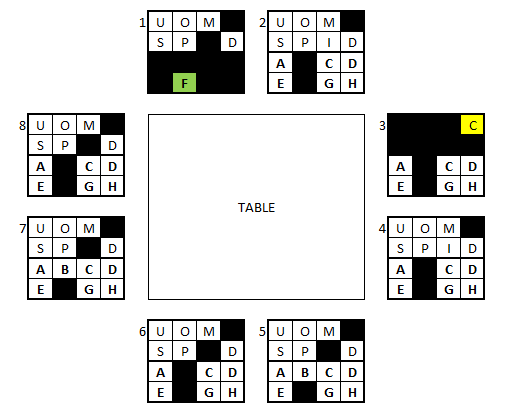 Use the following rules: 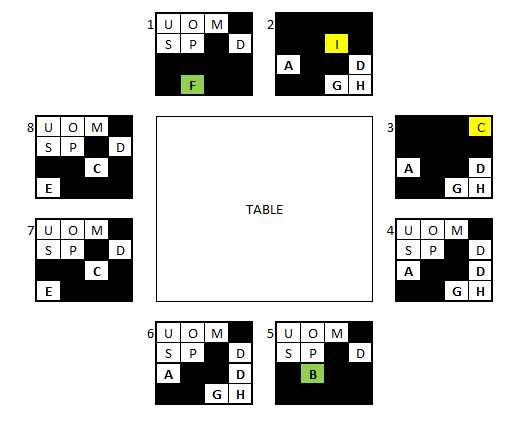 Turn to the next rules: 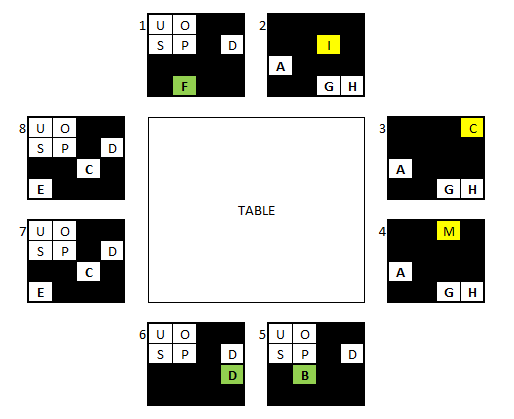 Now, use the next two rules: 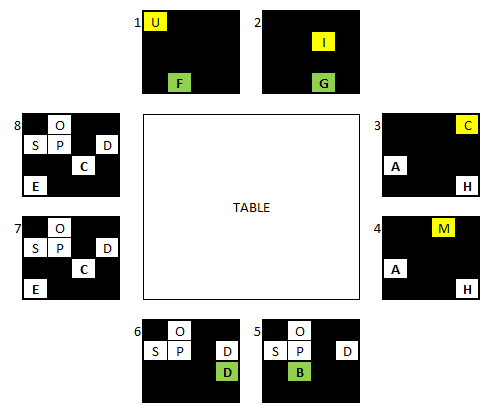 Skip the next rule for now and focus on:

- H sits third to the left of the representative from Dena Bank (D).

Straightaway we can place H in seat #3, since if it were in seat #4 it would sit third to the left of Bank U (not Bank D). This also places A by deduction in seat #4 and Bank D in seat #8. 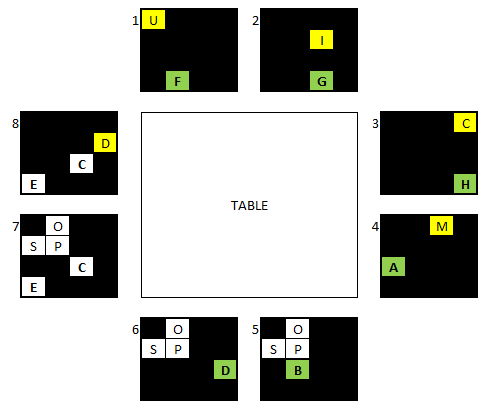 Now use this rule: 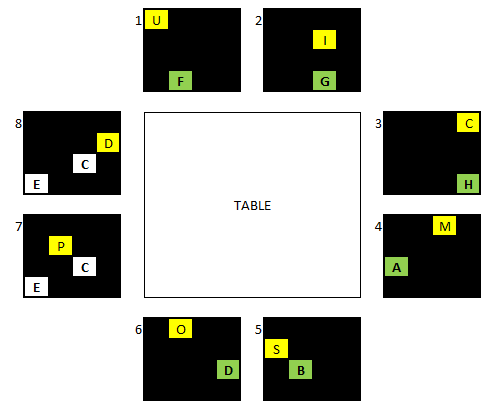 Return now to the rule we skipped earlier:

- Only one person sits between C and the representative from Oriental Bank of Commerce (O).
Immediately we can deduce that C must be in seat #8, since there must be one person between it and Bank O (which is in seat #6). Finally, this means E must occupy seat #7. Our final diagram thus looks like this: 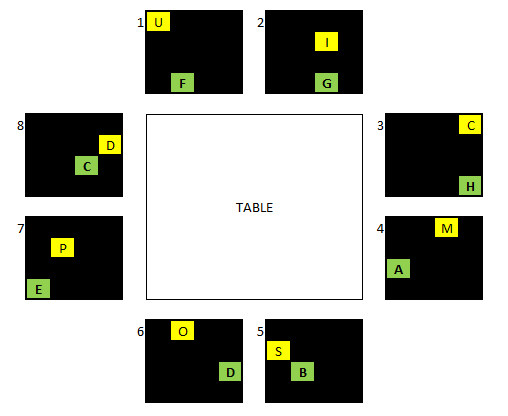 Starting with our arbitrarily-numbered seat #1 we therefore have, going clockwise:

And the puzzle is complete!

Going anti-clockwise from some chair

I could not solve this by logic, so I wrote a C program.
Total permutations of banks and their representatives $= 8! \times 8! = 1625702400$.
But given that the table is circular there are $7!$ ways that the banks can be placed.
And within the two constraints, only $192$ arrangements of the banks are possible.
So the total perms is $8! \times 192 = 7741440$ arrangements, not many.
I permuted them, checking the conditions, and found exactly one arrangement.

If someone can solve it by logic, I bow to their superior skill.

Not the answer you're looking for? Browse other questions tagged logical-deduction word-problem solvability or ask your own question.

58
What is the maximum number of solutions a Sudoku puzzle can have?
11
First number, which can not be defined
8
Can you help the traveller
8
The way to Acarien puzzle
6
The 169 members of the Dinner Club
4
Is there a solvable 2-box Sokoban puzzle in which the pushes must be interleaved?
1
Which horse wins the race?
4
Can the rook pass every square just once?