First puzzle I ever do! Hopefully it won't be too easy or too challenging.

My co-worker just gave me a USB flash drive, which was supposed to contain a couple files of code for me to review. Unfortunately, I think he might have given me the wrong one, cause when I plugged it in, these were the contents. 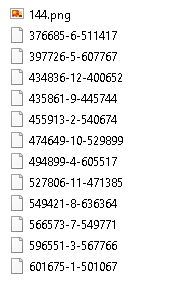 I opened the png file looking for answers, and this is what I saw.

What are the exact contents of those files?

(If you're at a loss as to where to start I can think of some hints, just say where you're stuck and I'll try to steer you in the right direction).

Edit: Added a new "knowledge" tag that maybe I should have added earlier (though no one is close to the part where some kind of knowledge may be required). Considering putting up a bounty too in a few days, I'm too anxious for someone to finally solve this!

There are only four possible positions for the X inside the box. If it was on the opposite corner, you would probably end up very, very far away from your destination.

As you already figured out, the colours of the box are clues too, but they might only make sense after the puzzle is solved, so don't focus on them too much.

Last clue for a while, because I feel bad for bumping this so much: the colours of the box represent time in different ways.

There are 12 destinations, and they're all within the same country. You might have to take a close look at them too.

Any major city would have worked, but this one in particular is by itself a clue.

Now it may be time to open your ears.

Time for a big clue I suppose.

So I just saw my co-worker and asked him about the USB drive. He didn't want to tell me what was in it, but he gave me a list of coordinates:

A rebus for you all:

I'll add some of your correct guesses here to help you try to solve this:

1. The six-digit numbers in the file names are portions of coordinates. Left side is latitude, right side is longitude.

2. The middle number is an index. Sorting by that index could be helpful (when you've figured out the coordinates).

3. The dimensions of the box are important, as well as the hex RGB representations of the colors.

4. j3App's coordinates are correct, but what could they mean?

I've now finally got all of it,

We are in a city starting with O.

The solution involves a police station an a fast food joint. Also a car dealer.

The x on the png

has 4 possible locations. Upper left means the coordinates are west of Greenwich and north of the equator

are the rough coordinates, meaning we are at 35 degrees north and 97 degrees west

When adding the 12 latlng pairs

we end up in 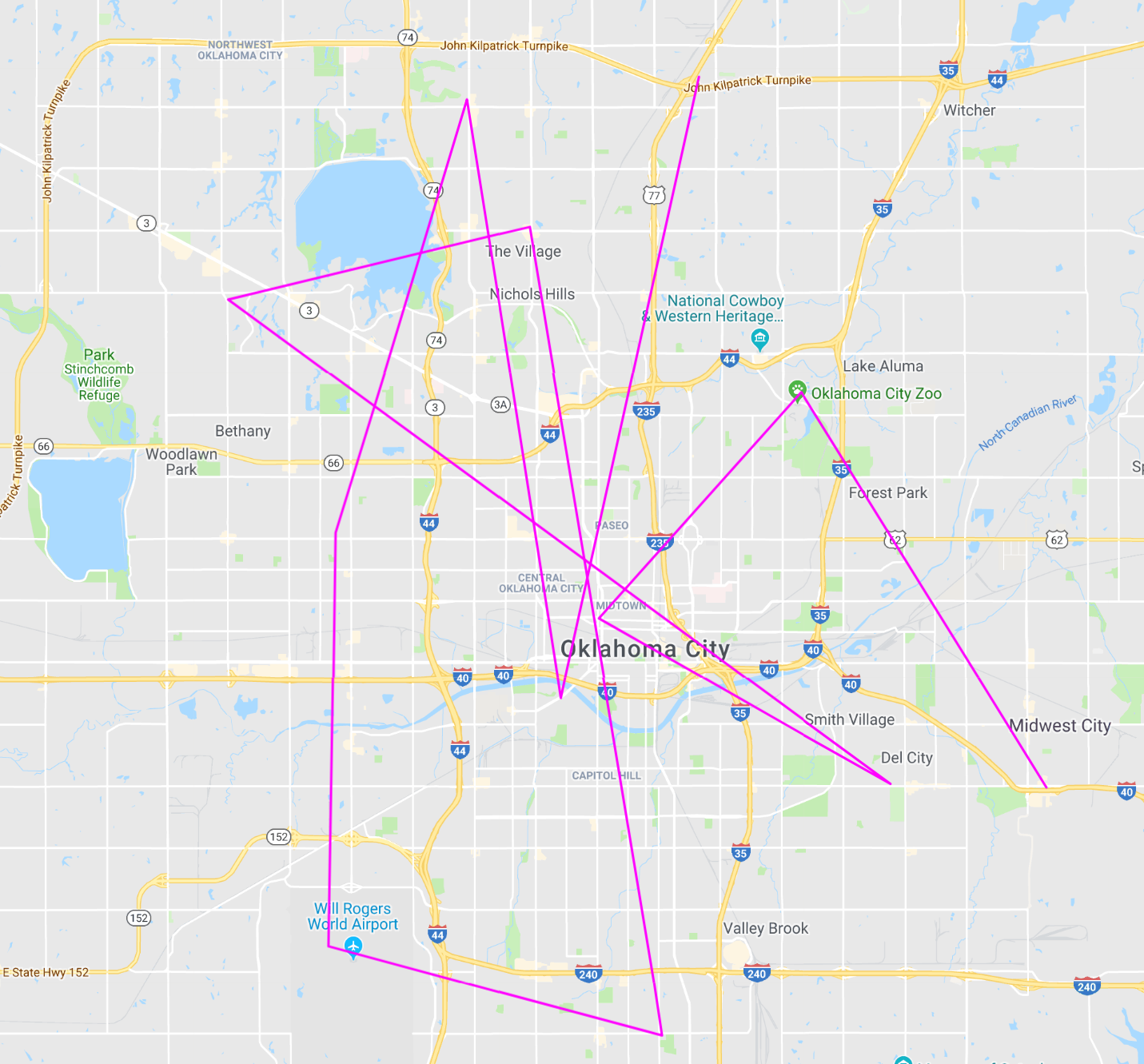 Then when looking at the 12 positions as they are indexed, we have:

I took a look around each of the 12 locations using street view.

Found interesting stuff like e.g. a fighter airplane, a graveyard etc, but couldn't make any sense of it

Also tried playing with the RGB values as time representers,

including using them as arc minutes and seconds for lat and long. Also this took me nowhere. Neither did the hex sequence 1997 (year?) nor the hex sequence 5321 (can hardly be a date or hrs/min)

The content could be Monika Lewinsky audio files, more tomorrow, it is bed time here

The flash drive contains the Radiohead album "OK Computer" stored as 12 tracks.
When looking at the album, it turns out it has 12 tracks that match the 12 positions on the Oklahoma City map. As an example the 6th track is called "Karma Police", track 11 is "Lucky", fitting the Casino.
Also "OK" means Oklahoma, so the city fits as well. I'll add the 12 tracks below

And finally, the new coordinates from Hint 10:

All coordinates are at airports, with airport codes matching the 2 albums before OK Computer and the 6 albums after:

The files that are not the .png file are

named with a scheme that looks somewhat like latitude-index-longitude

12 of them, and 12 different middle numbers, so try using that for the order and sorting by that middle field

take the first six digits as DD.dddd where DD is the degrees and dddd is the decimal portion of a degree.

for the last six digits.

If we plot this, we get: 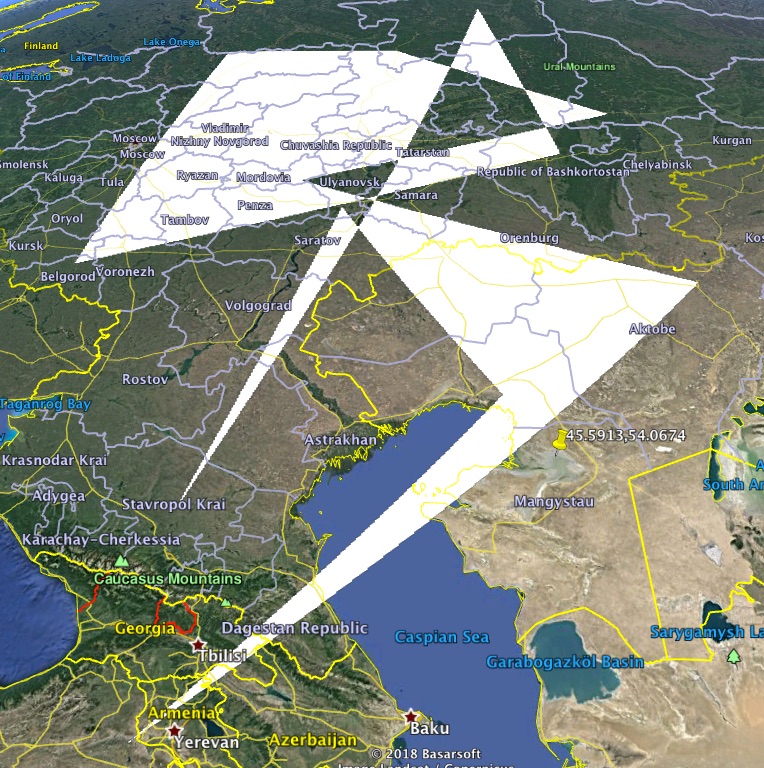 nothing I've ever seen. Maybe a Halloween cat if you squint. :(

Forgive me for my inexperience on posting...

I plotted the coordinates like @shoover (not in satellite view)

2) Most (9 out of 12) of the coordinates are in Russia, with two in Kazakhstan and one in Turkey. oh wait 9 is a square

I don't think my observations helped, but they might be interesting. (All I really did was play around with numbers)

Not the answer you're looking for? Browse other questions tagged enigmatic-puzzle knowledge visual computer-puzzle geography or ask your own question.

0
Computer Crisis Takeover! [Part 3]
15
The mysterious list
6
Stealing the bitcoins back
7
The mysterious equations - Clue Twenty Seven
8
How can I solve this number grid?
7
A strange series of questions
14
Lenny’s Logical Internship
12
Lunch with my travel agent
4
Covert Conversation - A North Daniels' Puzzle
12
Circling the rectangle: A strange IQ problem