Thank you so much for your help in scoring my last date. The date went really well, and we have so much fun. However, after that date she didn't reply to my texts for days, only to hit me with this: 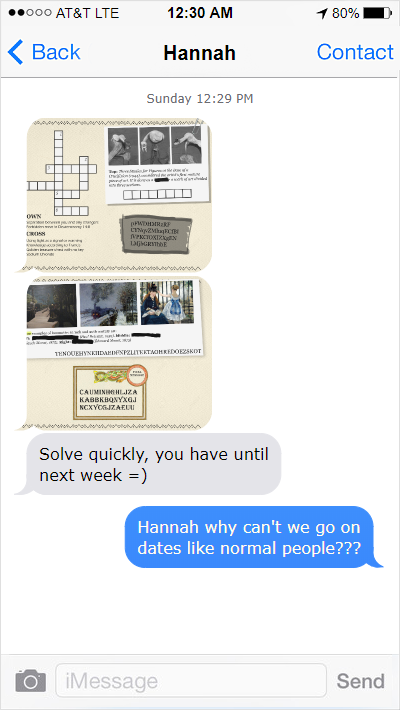 Well, I've been agonizing over them since. Looks like she has upped her difficulty too, after seeing how fast I solve the last one. Can you guys help me one more time with solving these? 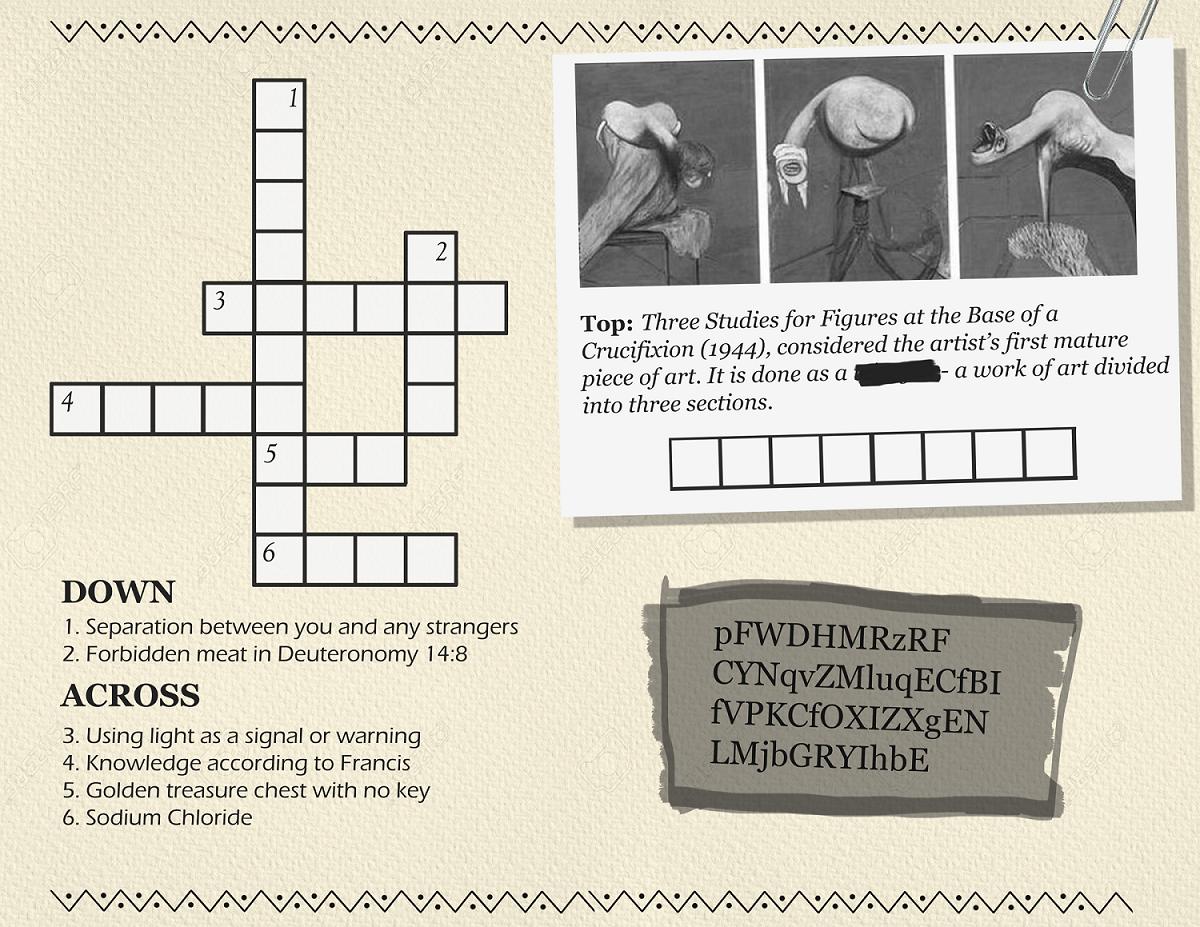 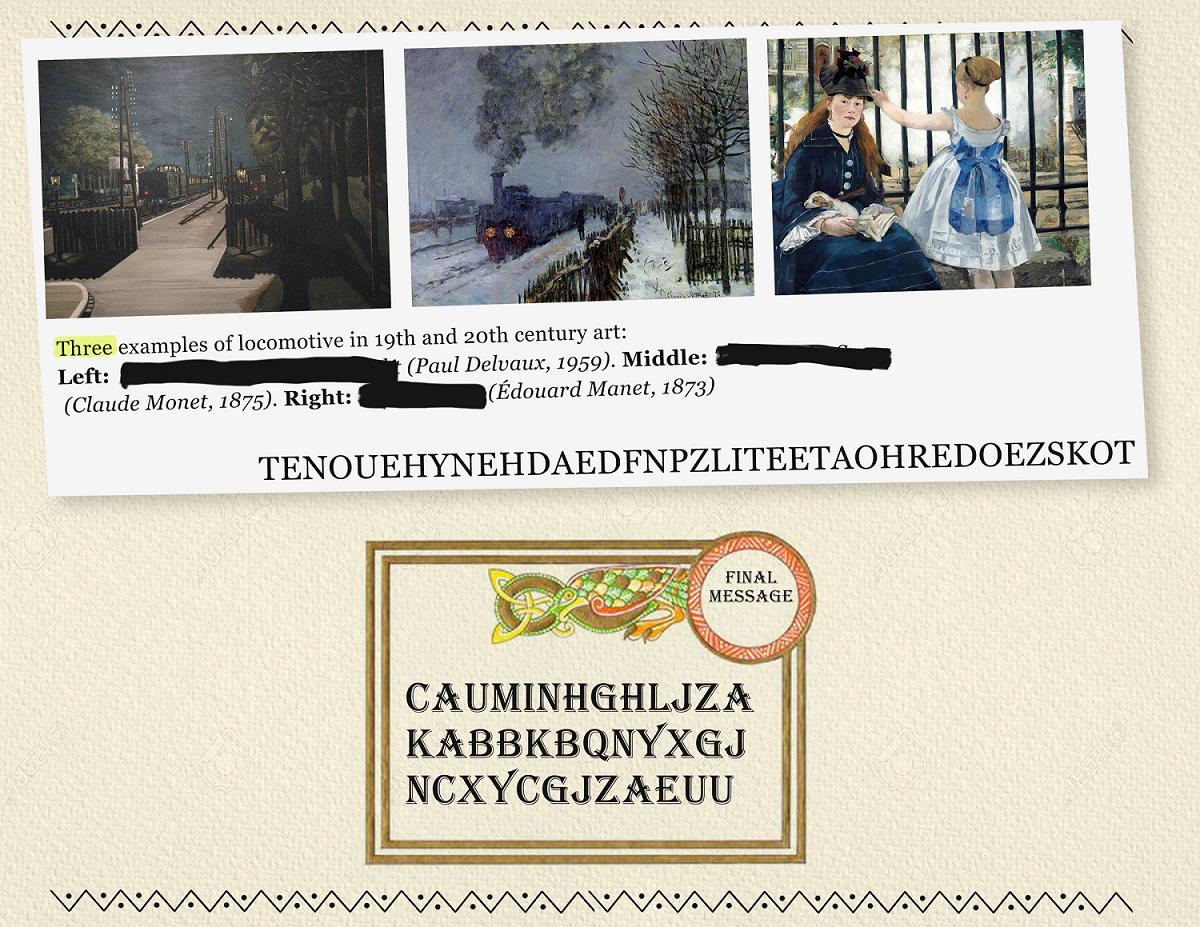 I think the texts are important, so I'll copy all of them out.

Thanks for the puzzle, it was very fun and challenging for my first one. Here is my answer to the puzzle, first of all, i had almost all done but was missing one word in the crossword. I wasn't exaclty solving it the way @hagfy did it but we ended up with the same answers. Here is my found and the result of the second page :

The three pictures are known as a "triptych" art. The word fit the in the box.
As @hafgy said, if you use a Vigenere cipher, you end up with:
wooooops you just stumbled upon a red herring lets try again

Honestly I did not found about this, so here is the @hafgy answer:
It looks like each border has a pattern of lines with 20 dots, repeated twice on each border. They all looked the same to me.
If you use the reference of the Crossword result, which lead to Bacon (the triptych art is also done by a certain "Bacon").
You can use the Bacon cipher decoder with the pattern with the I=J/U=V and you got :
"I LIKE U"

Here is where I actually found something by myself. As stated, the pictures are:
Left: Small Train Station at Night
Middle: Train in the Snow
Right: The Railway
All of it are references to train, etc...
And you can use here the Rail Fence cipher (https://en.wikipedia.org/wiki/Rail_fence_cipher) with a Rail key of 3 (the word "Three" being highlighter in the clue).
Which give you this sentence : thedeadendofonepuzzleisthekeytoanother
The Dead End Of One Puzzle Is The Key To Another
A red herring is also known as a mislead, which can be also seen as a dead end.

I had trouble, finding what it could be.
I thought first that some "Peacock" cipher exist because of the animal inside the borders.
But finally, it was only a Vigenere Cipher using the Beaufort variant with the dead end key:
redherring, giving this result :
textmeyouraddresssowecannetflixnchill
Text me your address so we can NetflixNchill

Hurry up man, you got no time left !

All clues seem to be related to BACON

So I went looking for some kind of

None of the decoded strings seem all that useful, though. Could be used as a key for something else (especially variations 1 and 3 which all map to letters), or I could have done it wrong.

I just tried using the third pattern with the I=J/U=V version of the cipher and got "I LIKE U" (congrats!). I think that might be the only message to find here.

The missing word is TRIPTYCH, which fits in the box.
And from @GarethMcCaughan, the artist of this triptych is "Francis Bacon". I assume this bacon just goes up there, with the rest of the bacon.

If you decode it using TRIPTYCH as a Vigenere key, you get:
wooooops you just stumbled upon a red herring lets try again

This might mean the triptych picture and/or this string are unnecessary?

Here's @GarethMcCaughan's actual input (since I screwed it up last time): If you take the uppercase letters of the ciphertext as 'A' and lowercase as 'B', it's BAAAAAABAAAAABBAABBBAABAABAAAABAAAAABAAAABBAAAABBA.
Decipher that bacon cipher to get REDHERRING

Two red herrings in one ciphertext!

I think that about covers the first half. The second half contains considerably less success.

Not sure what to do with these. The word 'Three' is highlighted, so maybe TRIPTYCH is relevant here? Maybe a ROT3 of something?
I tried using different permutations of the painting names as ciphertext or keys, but nothing turned out all that great.
Also, they're located in different places: The Met, Musée Marmottan, and National Gallery of Art

No idea. I tried decoding as a Vigenere cipher with 'BACON', 'TRIPTYCH', 'THREE', 'HANNAH', concatenated painting names, first letters or the paintings, and maybe some others...got nothing.

I have no idea...I tried several of the same keys as before.

Not the answer you're looking for? Browse other questions tagged cipher knowledge metapuzzles or ask your own question.