The unsolvable puzzle (a colorful and challenging jigsaw 2.0)

There once was a famous work of modern art that everyone in the world loved. One particularly nasty person however hated it so much that decided to use a time machine to go back in time to when the artwork was first found (inside an old warehouse that was later made into a national monument for being the birthplace of the artistic treasure).

However once he got there and defaced the artwork with his stickers, he realized he forgot to bring his scissors! He only had 2 minutes remaining to stay in the past and there were no sharp objects or matches in the area. In a hurry he decided to tear the modern art up instead.

Once he finished up tearing the artwork into 21 pieces and rearranging them, he exclaimed out loud in realization that he hadn't changed the rotational orientation of any of the pieces, making the puzzle much easier. He only had 10 seconds left so in a hurry, he rotated five pieces 180 degrees before he was sent back to the future. During his exclamation and his rotating of the five pieces, a smart puzzle hero (employed as a part time security guard) happened to be nearby and see him do it.

You are this puzzle hero and you know that 5 pieces have been rotated 180 degrees. As a self proclaimed puzzle hero, you decide to prove to yourself that you were meant to be more than just a part time security guard. Can you solve this unsolvable (if there were no hints) puzzle?

In order to not make it take too long, I included many internal hints (such as the imprecise edges) so there are many potential methods to solve this puzzle. There is no information hidden in the image though, so if you printed it out you wouldn't be missing too much information.

Depending on how smart you are about it, I assume this will take different people much different times to complete (ranging from potentially half an hour to never).

I will consider adding more hints if needed (that will fit into the context), but for now here's one:

As a puzzle hero, you realize that since this is art, there is a low chance of like colors being next to each other or it would look weird. (There are no two of the same color that share the same boundary)

A final note, you don't have to make the solution image clean, I'll post the solution image if anyone gets it. Even as much as a general location (with a decoded message of course) will be enough to be selected as correct answer. 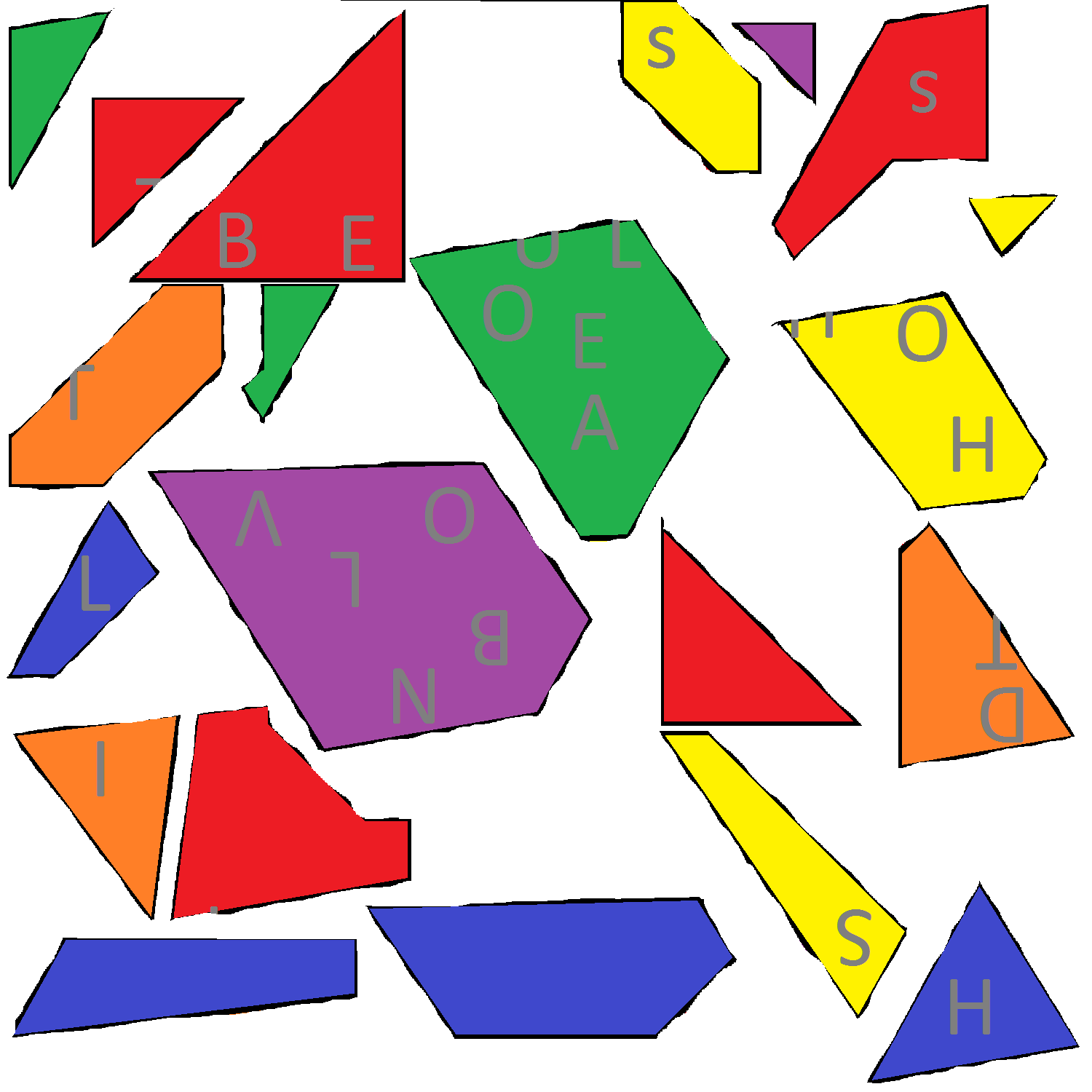 The solved image is 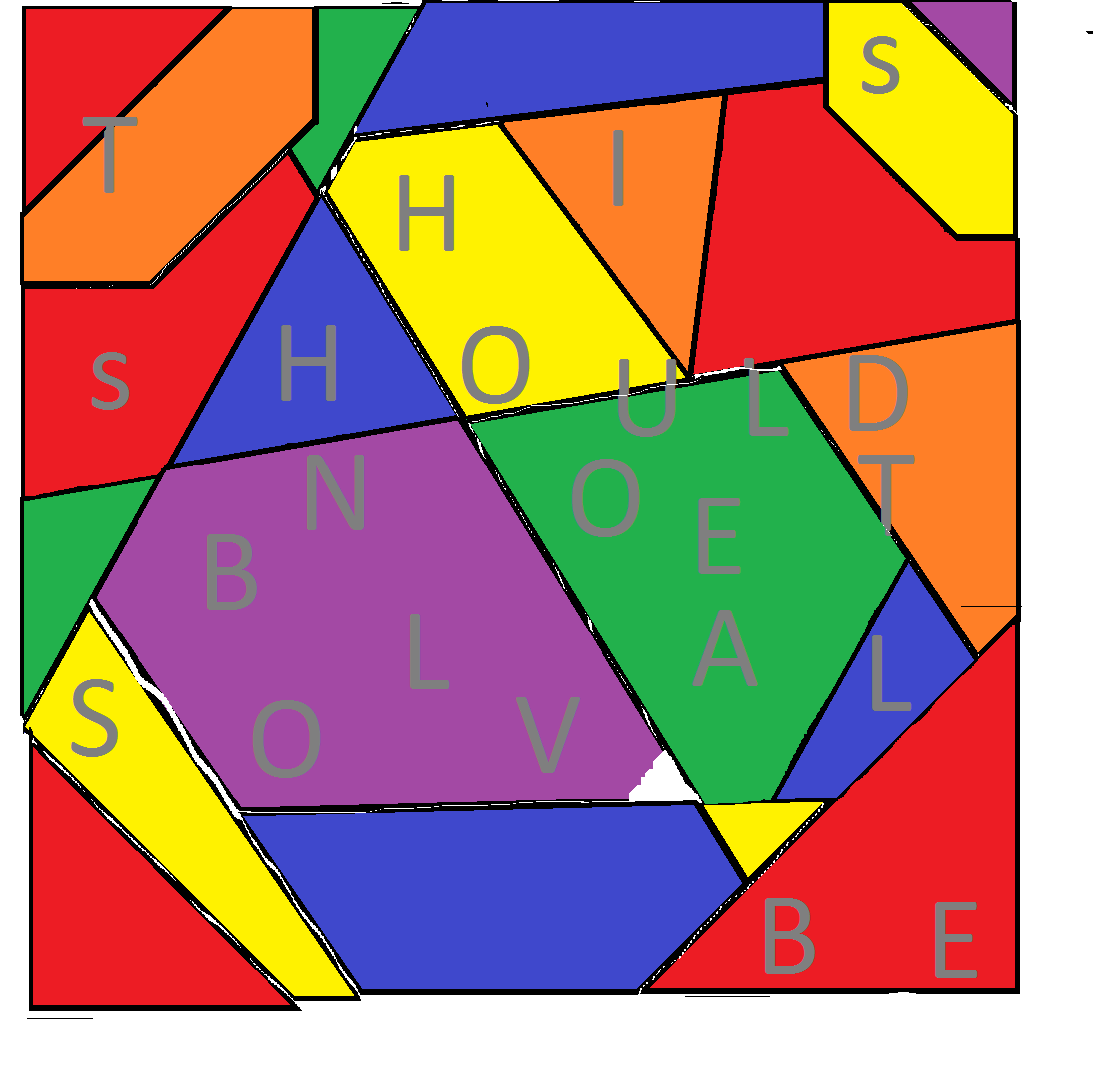 Apologies for the small whitespace near the 'V'. That was a part of the purple piece, which got cut off by MS Paint.

The decoded message is

'THIS SHOULD NOT BE SOLVABLE', as we can read across the image.

Not fast enough? This is my solution.... 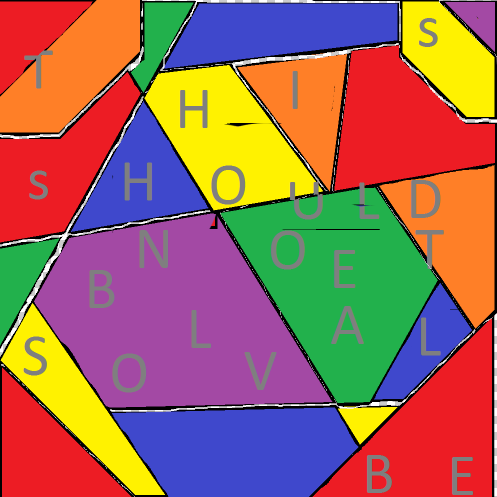 Not the answer you're looking for? Browse other questions tagged visual jigsaw-puzzle or ask your own question.